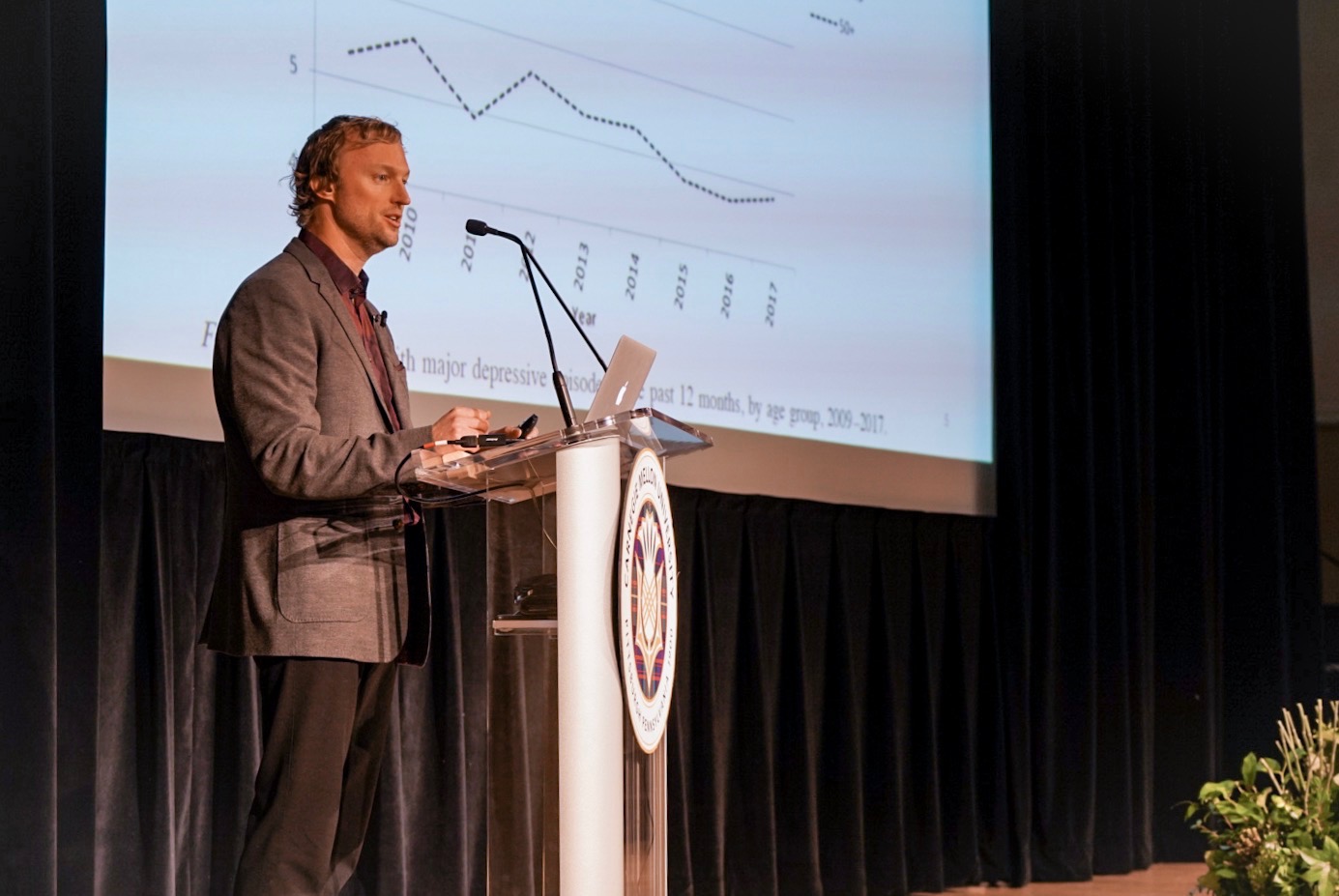 Life@CMU principal investigator David Creswell said that although they found high stress levels, they were not unlike other colleges. (credit: Courtesy of Carnegie Mellon University)

During the first-ever Tartan Community Day, students attended a presentation on the results of a multi-year study on personal well-being among the Carnegie Mellon student body, gathering together and enjoying ice cream sandwiches in the Rangos Ballroom. The presentation was given by David Creswell, a professor in Dietrich College’s psychology department and principal investigator for the project they call Life@CMU.

“This project is so distinctly CMU,” President Jahanian stated, describing the project as being centered on science and data analytics to improve student wellbeing. “The Life@CMU study illuminates the nuanced ecosystem of individuals, traditions, culture, that make up our community. It has allowed us to better understand the CMU experience and draw on the data that’s collected to influence our interventions, programs, and resources.”

Concluding his introductory statement, Jahanian added, “I want all of you to know that no one is immune to feeling alone or vulnerable at times… not even your president. But in moments of uncertainty we must remember that we are a community. There is an incredible network of support that surrounds us. Use it. Lean on one another. This is one of the most profound ways in which we can act as a community and also thrive as individuals.”

Before going into the Carnegie Mellon-specific results, Creswell provided context for the growing mental health problems in our broader society. As an example, he pointed to findings from a study that tracked mental health outcomes of a nationally representative sample of people in the U.S. that found there was a 50 percent increase in major depression diagnoses from 2009 to 2017 among younger Americans.

Phase I of the Life@CMU project followed a sample of first-year students over the course of the 2017 spring semester. The following spring Phase II tracked first-year and sophomore students over the semester as well. They were able to track 85 students who participated in both phases to examine their transition from being first-years to sophomores.

They gathered data on factors of students’ well-being and experiences, including sleep, stress, depression, loneliness, and life satisfaction, looking at students’ baseline scores at the beginning though the end of each semester. They also used Fitbit sensor data and phone information to sample for patterns in usage and activities over time.

The Life@CMU study also used experience sampling on participants’ phones to survey what students are doing during their waking hours, finding that on average 50 percent of that time is dedicated to school-related work. Students also used 29 percent of their waking hours for what Creswell described as the “catch-all” category of personal time, 9 percent on eating, 6 percent on naps, and 4 percent on exercise. Students also reportedly spent an average of three hours on their phones per day, which many people at the event were surprised wasn’t higher.

“A lot of this is tip of the iceberg stuff that I think is really important and can generate some important conversation around what the CMU experience is like,” Creswell explained.

They found that 8 percent of the Phase I students at their pre-semester baseline showed high-risk stress scores, but that escalated to 58 percent of students by finals week. Additionally, Creswell says there is a “ratcheting up” of stress scores for students going into their second spring semesters compared to their first spring, with pre-semester stress scores being higher among sophomore than first-year students.

Following the same trend with depressive symptoms among students, the project found that 34 percent of Phase I participants had been scored at high risk for major depression diagnosis at the beginning of the semester, but by finals week 58 percent of participants scored as being high risk. Creswell explained then explained that while the measurement they used “is not diagnostic of whether you have a major depression diagnosis, but it’s a really important predictor” for finding who may be at risk.

When they measured loneliness they found that it was consistently high throughout the semester, leading to likely increases in stress and depression. Creswell made note that “if you come into the semester with high loneliness scores it predicts you having increasing depression over time.” He also acknowledged that the high levels of loneliness surprised them as they expected the college environment would run counter to loneliness.

Creswell stated that he wants to talk more about loneliness and that we should start a dialogue on trying to understand loneliness among younger adults, especially noting why it might be higher than among other generations.

Based on the results of the study, one of the narratives Creswell is trying to adjust is that Carnegie Mellon has a unique stress culture. “I think there’s a lot of stress, but I don’t see anything that suggests that our stress culture may look a whole lot different than other college student cultures,” he said.

Depression levels in Carnegie Mellon, Creswell stated, are “similar depression scores to other college samples… nonetheless, we’ve still been really concerned.” This same similarity can be seen in student’s loneliness scores as well.

One of Creswell’s main “myths” that he was trying to dispel with this presentation was of sleep. While the Life@CMU team found that the average of students’ perceptions for amount of sleep was 5.6 hours, CMU students were found to actually have closer to 7 hours per night.

As the audience laughed at a sleep graph that showing a spike in the average amount during spring break, the professor explained they didn’t find much variance in students’ sleep amounts and schedules. Creswell then showed that they found the average sleep time to be at 2:23 a.m. and the average wake time at 9:30 a.m. He did stress here that these variables are predictive of “mental health and GPA-type outcomes.”

It appears that the mental health situation of Carnegie Mellon students is more complicated, however, as the project team found that life satisfaction scores returned with fairly high scores in comparison to other colleges’ scores.

“How is it that students could be carrying these depression burdens, particularly as you ramp up over the course of the semester, but also say that I have gratitude and purpose in life?” Creswell asked.
He answers that the students he’s spoken to on this have told him, “This makes sense. I wouldn’t trade being at CMU for anything, but I’m dealing with a lot of these mental health challenges.”

Outlining next steps, Creswell explained how members of the Life@CMU Project have also been using machine learning to predict a student’s depression risk. Additional research currently under review shows that they can predict “end-of-semester” depression with about 85.7 percent accuracy. The professor stated, “Some of the work we’ve been doing shows that even in the first two weeks sensing data can predict with reasonable accuracy who’s likely to be ratcheting up a level in terms of their depression symptoms.”

The project has begun Phase III intervention study for first-year students to examine strategies for improving resilience. Creswell himself will also begin teaching a “Hack Your Life” course for future first-year Dietrich College students in the fall.

As a final call to action, Creswell emphasized the importance of preparing Carnegie Mellon for future at risk students, showing results from a study that found the rate of pediatric emergency room visits for suicidal ideation or attempts has doubled over the past decade. “We really need to think about ways to support each other and to create an institution where we can minimize those who are really struggling with this.”

Creswell describing the message of the Life@CMU Project as twofold: “First, I do think it’s one of hope. We’re seeing high happiness and purpose in life in our students and really an increasing greater availability of mental health resources and initiatives on campus.”

However, echoing Jahanian’s comments, Creswell said, “I also think that the second part of it is that this work is really a call to action among every one of us here. We need to be proactive about helping our current students with their mental health and wellness and hopefully this work really accelerates our efforts our students and thus future generations of students.”