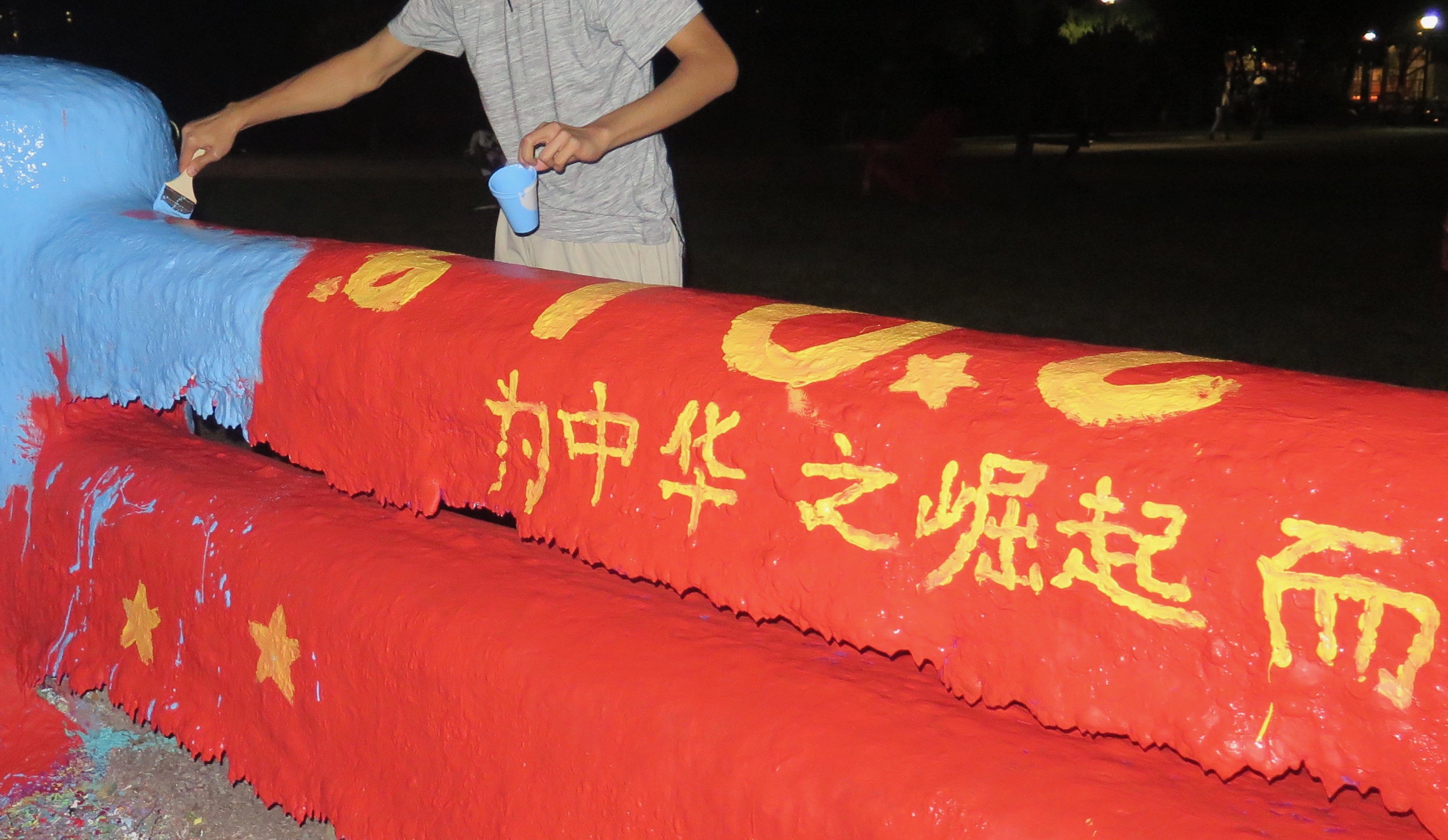 A student paints over the fence which had previously commemorated the formation of the People’s Republic of China. It was covered in blue and black in support of Uighurs in China and the protests in Hong Kong. The act sparked extensive campus discusscusion, much of it on Facebook and WeChat. Eventually, the groups responsible for both fence paintings issued a joint statement prioritizing civility and respect. (credit: Jacob Paul/Layout Manager) 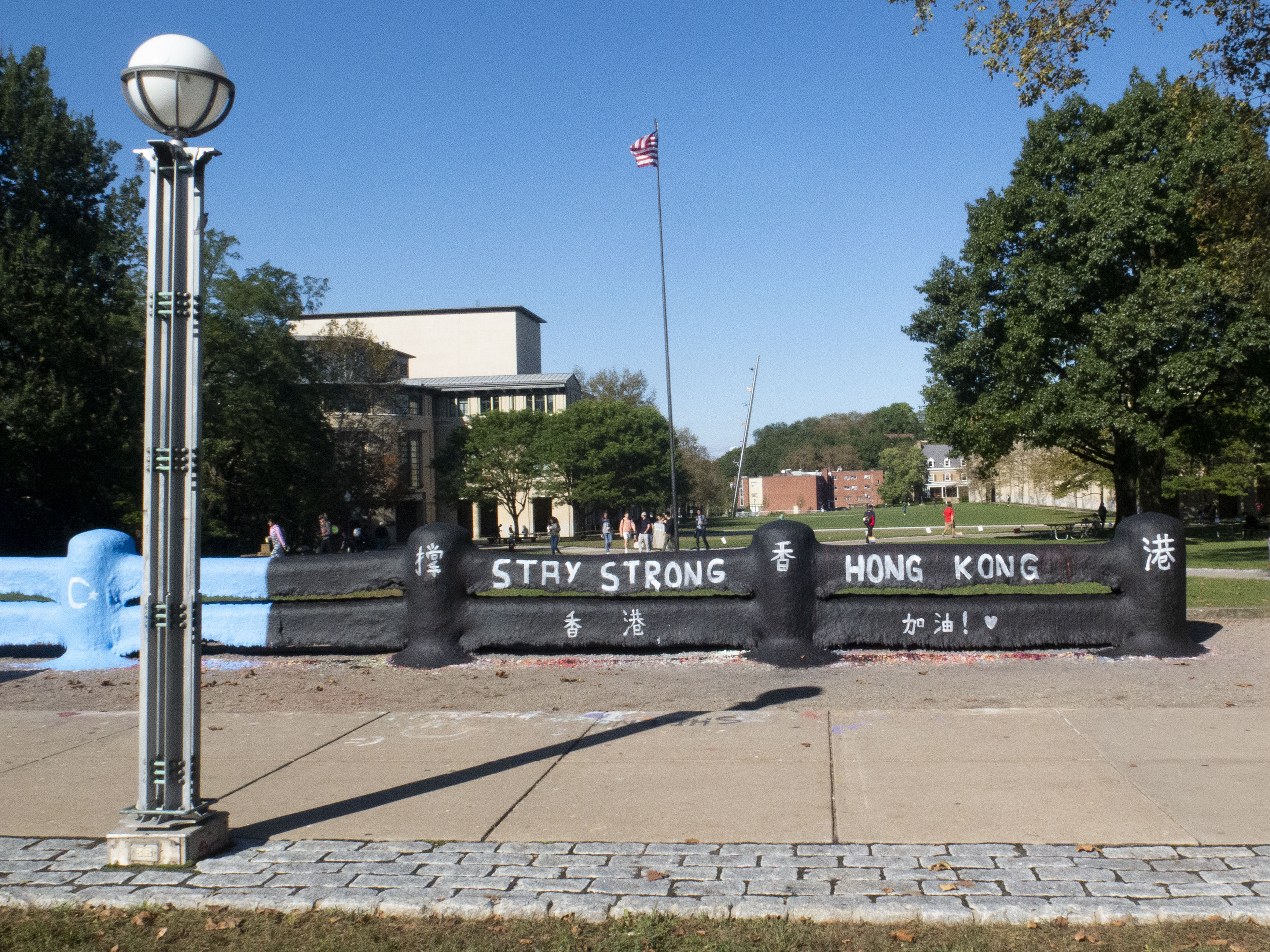 The above shows this week's second fence iteration, in which students showed their support for the ongoing Hong Kong protest. (credit: Jacob Paul/Layout Manager)

In between the brick academic halls and green lawns of Carnegie Mellon University’s campus is a fence. It is widely known as “The Fence,” and nearly every day it is covered in a new layer of paint. The Fence has been painted hundreds of times.

The Fence functions as a campus-wide message board. Student organizations paint the fence to celebrate victories, advertise events and, sometimes, to commemorate tragedies. Rarely does it get political.

CSA paints the fence
On Sunday, Oct. 6, Carnegie Mellon’s Chinese Student Association (CSA) painted the fence red to celebrate the 70th anniversary of the formation of the People’s Republic of China by the Communist Party of China (CPC). Oct. 1 was National Day, a holiday celebrating China’s history.

“October 1st means the same to us all Chinese students, the same as July 4th means to people in the US,” said Yifei Yang, the President of the CSA.

On Monday, students were greeted with a fence coated in red paint. “HAPPY BIRTHDAY CHINA,” was painted on the center of one side and the yellow stars of China’s flag on the other.

Many Chinese students were pleasantly surprised. Jiaqi Pan, a masters student in the Language Technologies Institute, said that she “never expected this could be here, so prominently on campus.” She called the painting “creative” and “cool,” and translated some of the Mandarin text painted on the fence to “Why are there tears in my eyes? Because I love the land so deeply.” It was the refrain of a poem by the famous Chinese poet Ai Qing.

One student asked a passerby to take a picture of her in front of the poem, and he then asked her to do the same. She said that the painting made her feel “proud.” She identified herself as a grad student but did not wish to share her name.

But not all students felt so warmly about the CSA’s painted fence. Cuneyd Taoglu, a sophomore studying mechanical engineering was walking across campus to an event for the Muslim Student Association (MSA) when he saw the fence. He was shocked.

“I was just shocked to see how we allow the glorification of an authoritarian regime,” said Taoglu.

Aidan Place, another board member of MSA, said that he was “disappointed to see” the fence commemorating a country that is “in my opinion, and I think most people’s opinion, actively carrying the destruction of a cultural ethnic group.”

Place and Taoglu were referring to the Uighurs, a Muslim ethnic group, who live in have reportedly been detained in “re-education camps” by the Chinese government.

Taoglu’s family is Turkish. He said that he has a particular concern for the Uighurs “because they were the first Turk people to mass convert to Islam, and they’re the reason why I’m Muslim today.”

MSA and HKSA paint the fence
There are rules to painting the fence. It can only be painted between the hours of 12 a.m. and 6 a.m., only with paint bushes (no spray cans or rollers) and only in its entirety (no graffiti).

To claim the fence, an organization needs to have two people stationed next to the fence at all hours. They need to do the same every night if they don’t want another organization to take the fence.

Taoglu and Place saw that the fence was unguarded and immediately had the idea to paint it in response. They got in touch with the Hong Kong Student Association (HKSA) and made plans in conjunction that night.

By 10 p.m. a large group of HKSA and MSA students had gathered at the fence. They sat in lawn chairs and on picnic tables, ate Voccelli’s pizza, and drank Turkish coffee in plastic solo cups.

At around 10:30 p.m., according to several members of MSA, police officers went to the fence and notified them that someone had anonymously called the Carnegie Mellon police to notify them that something was going to happen at 12:00 a.m.

Students said that they weren’t worried that anything would happen, because they had such a large group. There were 36 students present. But for safe measure, two Carnegie Mellon police officers returned at midnight.

Students dipped their paint brushes into cans of sky blue and black paint and got to work. Others held out their phones as flashlights.

When the sun rose on Tuesday, half the Fence was painted in blue and the other half in black. Star and crescent crests and the flower emblem of Hong Kong were painted on the posts. “DON’T FORGET ABOUT US,” was painted at the center. The other side read “STAY STRONG HONG KONG.”

Taoglu explained that MSA painted the fence as a response to the “the atrocities that the Chinese government is perpetrating.” “It’s not directed at CSA,” added Place.

The HKSA later clarified in a Facebook post that they “painted [The Fence] in hopes that CMU would become more aware of our political unrest in Hong Kong.”

Students from the MSA and HKSA staked out the fence in lawn chairs all day. Mansour Elsharawy, another MSA board member, said that the response they received was generally positive. “People have been coming and saying like, ‘this is great, thank you’,” Elsharawy said.

Later that day, Place posted on Overlooked CMU, a Facebook page dedicated to the discussion of social issues, about pushback that the MSA had received.

Place wrote “I personally have been subjected to online abuse and threats after people linked me to the painting. Most recently, this morning a student came up to the fence to warn me to be careful and safe, saying people on WeChat were threatening me.”

Hundreds of students showed their support. 429 people reacted to the post on Facebook, 100 of whom used sad emojis. In the comment section students went back and forth over a range of topics, including the CPC’s reported actions.

On Wednesday night, the MSA and HKSA held “S’mores and Dialogue at the Fence” event to continue the campus dialogue. “There were some really good, peaceful discussions,” said masters engineering student Ansh Nasta in a comment on Overlooked CMU.

The next night, The Originals, a Carnegie Mellon a cappella group, painted the fence to advertise a joint concert.

Highest Priority*
By the end of the week, all of the students originations involved came together to emphasize that respecting one another was the highest priority.

The president of the CSA, Yifei Yang, told The Tartan that “Our fence has no intention to be political, and we do not want any difference in opinions and perspectives raise unintentional conflicts in our CMU community.”

On Thursday, Thomas Wong, senior in Physics and Mathematical Sciences, posted a statement on Overlooked on behalf of HKSA. The HKSA decried “the cyberbullying and threats to MSA members” as “failures on everyone’s part to uphold the core values of this community.” They also said that “CMU is a collaborative community, but none of that works if we do not treat each other with fundamental empathy and respect that we deserve as human beings.”

On Friday MSA, HKSA and CSA posted a joint statement on Overlooked addressing the tension. “We acknowledge that a difference of opinions, beliefs and opinions, is inevitable given the diversity of CMU’s student population and originations.” It continued, “however, we believe that this does not warrant or justify any form of threats to anyone’s safety and wellbeing.”

They concluded that “differing political opinions should never give way to any extreme action that would intimidate or target any individuals or organizations on the premise of race, ethnicity, nationality, religion or country of origin.”