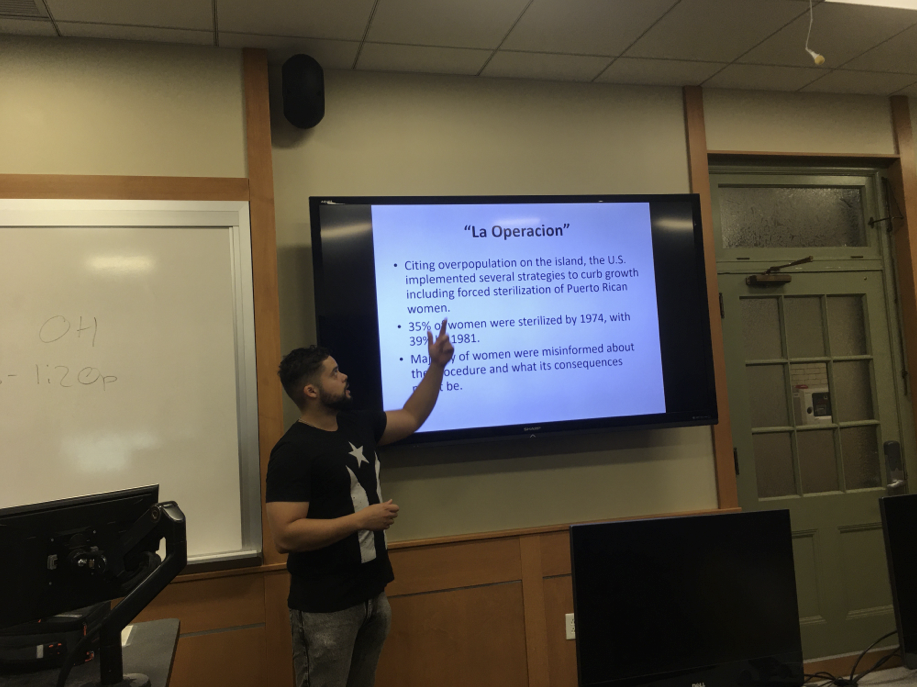 Jose Diaz, program director at local nonprofit Hope For All and a University of Pittsburgh graduate, came to campus Thursday for a talk hosted by the student organization CMU in Puerto Rico. In the talk, Diaz gave a perspective of a Puerto Rican living in the diaspora — significant because there are more Puerto Ricans living outside Puerto Rico than on the island itself —and educated the audience on the history of Puerto Rico up to modern times.

Born and raised in Brooklyn, New York, before moving to Pittsburgh at age 18, Diaz is considered a “Nuyorican,” a term for Puerto Ricans living in New York City. However, he prefers to identify as Boricua, derived from Boriken, the original name of Puerto Rico before it was colonized by Spain.

Coming from New York City, a place with a large Puerto Rican community, Diaz felt that his Puerto Rican identity had been somehow “taken” from him when he moved to Pittsburgh. He says that he saw Pittsburgh as a very racially binary city — you are either labeled as white or black, with little in between. Years later, Diaz was angered when he saw President Trump criticizing Puerto Ricans as lazy. He felt compelled to read up on the island’s history and post about it on his social media to show the world Puerto Rico’s true colors, attracting attention from people who said they had never heard of the things he posted. Today, because of that, he no longer has a sense of his identity being “robbed” from him.

His personal roots correspond to a larger theme in his talk — the history of the island and the cultural disconnection that results from living in different places. Before the Spanish arrived in the Americas, Puerto Rico was inhabited by the Taino people. The Spanish controlled Puerto Rico as a colony for about four centuries, until the United States, seeking to expand its own interests in the Caribbean, offered to purchase the island from Spain. Spain refused, so the U.S. invaded Puerto Rico in 1898, forcing Spain to cede control of it to the U.S. under the Treaty of Paris in 1899.

Puerto Rico has been a commonwealth of the U.S. ever since — its residents are U.S. citizens and have been since 1917, but they cannot vote in general elections and do not share in all of the same benefits that U.S. states have.

Diaz also discussed what was known as Operation Bootstrap, a series of U.S. government projects to transform Puerto Rico’s economy, which had until then been mostly agricultural, to a manufacturing one, using measures like tax incentives. He then pivoted to another dimension of U.S. and Puerto Rican history: “La Operacion.” These were the drastic measures the U.S. took because it was concerned about overpopulation in Puerto Rico. Besides steps like encouraging people to move to the cities, the most drastic was the forced sterilization of Puerto Rican women, most of whom were not told that they would no longer be able to bear children. While the stated motivations were general population control and the need for more women in the workforce, Diaz mused about the unstated motivations behind the forced sterilization. Perhaps, rather than just general population control, it was meant as a way to curb the population of people of color and “whiten” the population, as white was automatically considered the aesthetic norm.

Another historical episode Diaz described was the decades-long use of Vieques, an island off of Puerto Rico, as a U.S. military testing ground. The damage to Vieques was so great that some areas in the eastern part of the island have more craters per area than the moon. The military finally left the island in 2003, after massive protests from the Puerto Rican people.

Today, nearly half of the island’s population lives in poverty. A debt crisis led to the creation of the unelected fiscal control board PROMESA, formed with no input from Puerto Ricans. The board is highly unpopular in Puerto Rico, Diaz said, as some Puerto Ricans feel that it is just another symbol of their lack of control.

Diaz detailed how Hurricane Maria traumatized the island in 2017, worsening the existing problems on the island. The University of Puerto Rico did a mental health survey before the hurricane and found that about seven percent of Puerto Ricans suffered from serious mental health problems, a rate already higher than the national average. Post-hurricane, suicide rates on the island spiked. Even more Puerto Ricans left the island, adding the trauma of moving to an unfamiliar place to the trauma of the hurricane itself. With government aid often slow to arrive, the diaspora and the islanders came together to support their physical and ancestral home, Diaz said.

This summer, hundreds of pages of private chats between the then-governor of Puerto Rico, Ricardo Rossello, and his associates were leaked, showing them mocking and insulting their fellow Puerto Ricans in vulgar terms. Many Puerto Ricans were furious, and demanded Rossello’s resignation, which happened several days later. Diaz pointed out that there were more subtle symbols of resistance as well, in addition to protests in the streets. These included using a higher unofficial death toll from Hurricane Maria rather than the government’s official numbers, indicating a lack of trust in the government, and the waving of both a black and white version of the Puerto Rican flag, created originally to protest PROMESA, and a version with a lighter blue, symbolizing resistance and independence, respectively.

Diaz is personally pro-independence, but more than anything, he wants islanders to have more control over their destiny, whether that means statehood, independence, or something else.