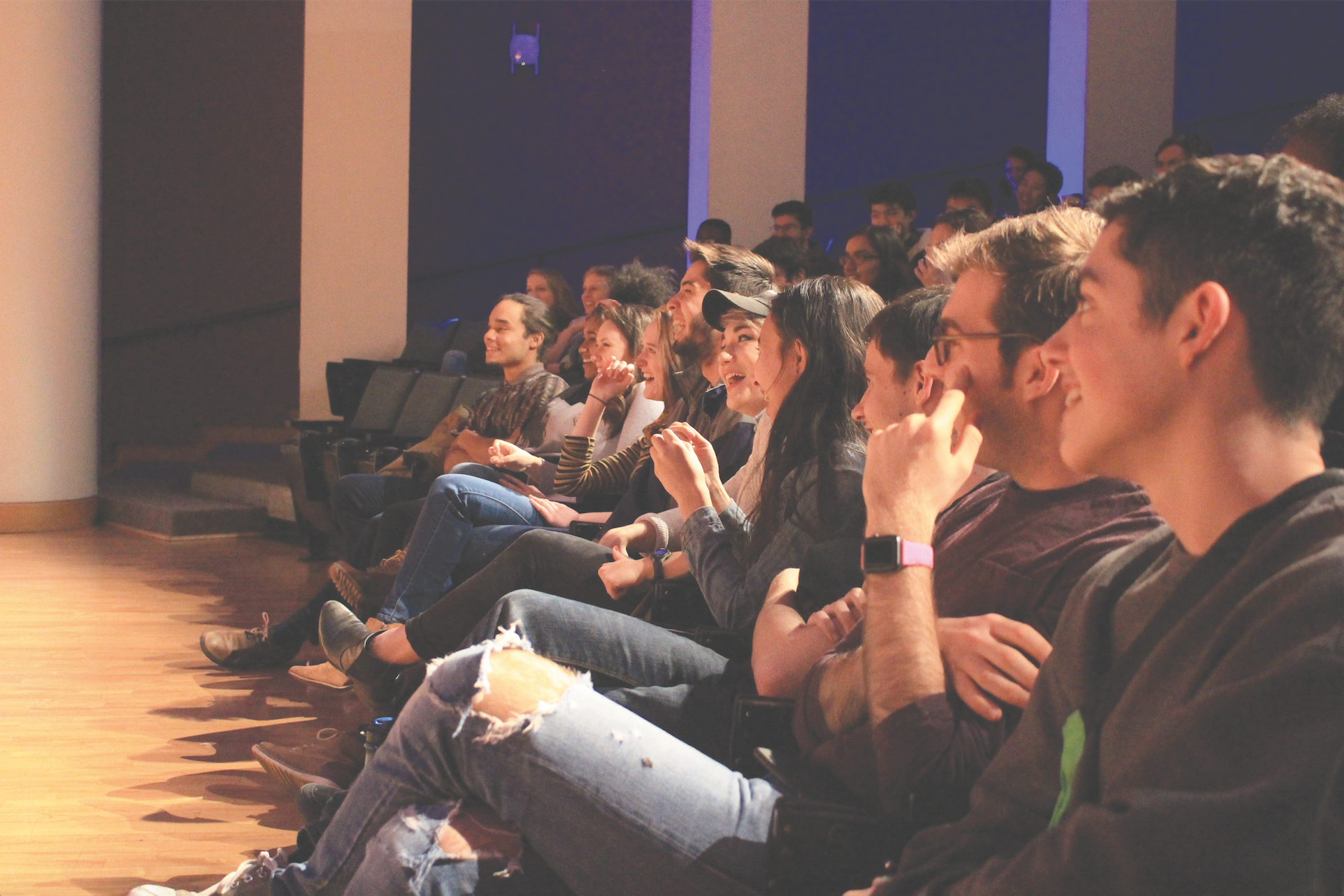 Last Thursday, Carnegie Mellon’s Activities Board (AB) went back to its tradition of hosting a major act during their Carnival Comedy show. Unlike its experiment with a series of comedy acts last year, this spring, AB brought the acclaimed Chris Gethard to the cozy stage of McConomy auditorium. Gethard is best known for hosting his own talk show, called The Chris Gethard Show, which takes place in New York City. Opening for Gethard was Tim Dillon, who was featured in a list written by the Rolling Stone as one of the “10 Comedians You Need to Know.” The packed auditorium was in for an eventful night, which took place over the course of two hours.

The night started off with newly announced AB comedy chair, freshmen chemistry major Jon Goodstein throwing free baseball caps to an excited and loud audience. When Dillon shortly came on stage, the self-described gay comedian joked that colleges were “wasting parents’ money on comedy.” The comment acted as a sort of prelude to Dillon’s personality throughout the first part of the show. From calling a whole row of drama majors in the audience future Panera bread workers to labeling cruises as simply “floating buffet[s],” Dillon exerted himself as someone who is not afraid to speak his mind. While bold, his statements were oftentimes backed by rationalization, which took the form of boisterous rants. As he made many amusing jabs at society, Dillon did not shy away from self-deprecatory humor. He said that once, his friends told him he looked like “Steve Bannon driving a Lyft.” Dillon also had the ability to talk at great speeds, which instilled plenty of robust energy throughout the first part of the show.

Afterward, Dillon gave way to Gethard, who proved to be the star of the night. Although having a softer voice than Dillon, Gethard was more skillful at pacing his talk and had a genius for storytelling. While both comedians were able to incorporate the audience into their act, Gethard had a particularly funny and memorable interaction to share. Prior to the show, Gethard received an Instagram message from one of the audience members, who appeared to be an avid fan of the comedian. Gethard described how he nearly had a heart attack when the the sender said that she was the only one in line for the show, minutes before it was set to start. However, Gethard’s fear proved to be wrong, as he was embraced by a receptive audience throughout the night.

During the second part of the show, Gethard touched on a variety of topics, from his perception of Pittsburgh as an industrial city with a hipster vibe to an amusing pun on his last name. A major part of the show, however, dealt with Gethard’s experiences as he was growing up in New Jersey. In an initially heartwarming tale from his high school years, Gethard talked about how his anger at a bully gave his 13-year-old self the drive to achieve his goals later on in life. However, Gethard then apologized to the audience for the not-so-inspirational story, as he disclosed the infuriating fact that his high school bully went on to become richer, and could afford more expensive horses than the comedian. Gethard also talked about his acceptance that he never will fit into society’s definition of being “cool.” His self-disclosure would transition into a recollection of what he had felt to be his “coolest moment” in life. In an effort to say “something cool” in front of his friend one night, 16-year-old Gethard unabashedly admitted to his strict father that he and his friend that he and his friend “have been drinking [beers] all night long.” While his stories revealed a more serious theme concerning the struggles of his adolescence, Gethard maintained the hilarity of the show with his upbeat personality.

Gethard’s ability to tease out humor in any topic also shines through his discussion of many normally depressing topics, including rudeness of some hurried New Yorkers, the harmful effects of cultural stereotypes, as well as the stress behind the way gun issues in America are being framed as solely mental health issues. The comedian also went into more lighthearted, but stranger topics, from a friend’s sexual experimentation with a couch to the terrifying thrills of Gatorland, an amusement park in Florida dedicated to the crude feeding of animals to alligators. It appears that his entire life could be one large comedy show, but much of Gethard’s ability to engage his audience can be attributed to his knack for vividly recreating the past, as well as his effortless skill at impersonating different kinds of people.

Indeed, by the end of the show, the self-described “grown-up version” of Calvin from Calvin and Hobbes left a roaring and satisfied audience, signalling a success for this year’s Activities Board Carnival Comedy committee.