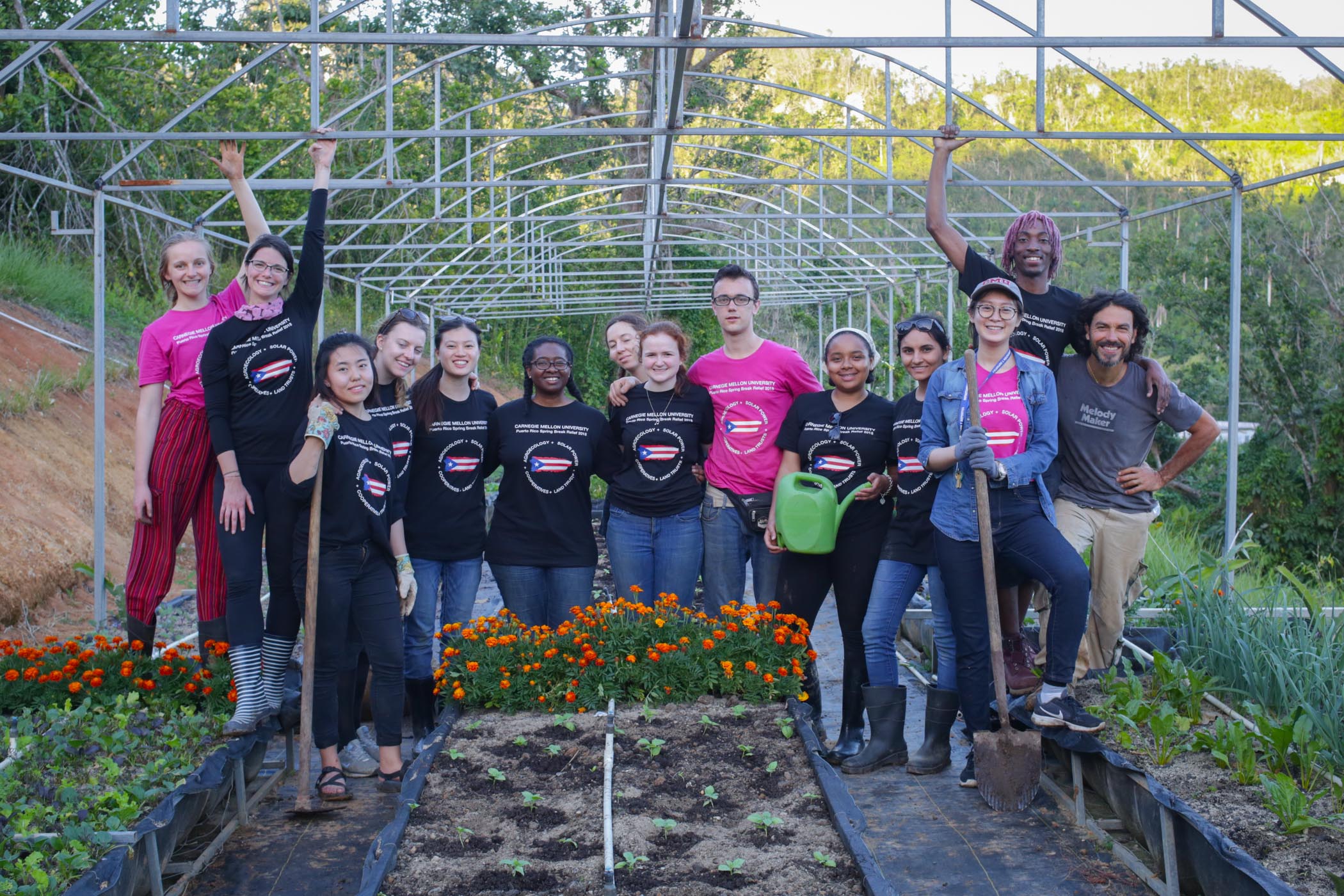 Closing in on the six-month anniversary of Hurricane Maria’s landfall in Puerto Rico, a group of Carnegie Mellon students led by Tiffany Taulton, a graduate student in Heinz College majoring in public policy, visited the island on an “alternative spring break.” The group, besides bringing donations to help the island, spent the week helping some of the most vulnerable segments of the Puerto Rican population and learning about the fragile nature of the island’s natural ecosystems. In an interview with The Tartan, Taulton gave a summary of the trip’s activities and her reflections on the island’s current condition.

Taulton, who spent part of her childhood in Puerto Rico when her father was stationed there, immediately noticed improvements as her flight approached the island. “Flying over San Juan, I noticed there did not seem to be quite as many blue tarps [temporary roofs for homes damaged by the hurricane] as there had been when I’d last come in November [with Carnegie Mellon student Rosana Guernica],” she recalled, which made her feel that “there had been some progress” on the island. “Even the trees seemed to be trying to leaf out,” she said. But, it was evident that the recovery was still in progress because she still saw many blue tarps and broken branches on the roads once she had landed.

On their first full day, the group visited Caño Martín Peña, a tidal channel that connects San Juan Bay to Laguna San Jose and Laguna Los Corozos, where they learned about its history, ecological significance, and the many issues plaguing the area and its residents. According to the Environmental Protection Agency’s website, this tidal channel is heavily polluted from waste material and sewage that gets discharged directly into it. Residents near the channel are exposed to these harmful chemicals due to flooding from the lack of adequate drainage, causing everything from skin lesions to asthma to cancer. One part of the channel — which in the past had been over 200 feet wide — was so heavily damaged that it was now only two feet wide and about one foot deep, and it even hosted a mini-forest of small trees.

“It was heartbreaking to see all the turtles swimming in the stagnant, smelly water that bubbled from all the organic material that filled it,” said Taulton. She remembered that “one student asked why they didn’t just cut down the trees [in the mini-forest] and unblock the stream. The guide said that the area was so toxic that you had to wear a hazmat suit to work in it, and no one could touch it until the Army Corps of Engineers finished their study and Congress released the funds to begin the dredging.” The combination of government red tape and the island’s financial woes meant that the residents were hoping that the restoration of the channel would be done by 2029.

As government assistance to improve the channel’s condition and install sewage infrastructure has been practically nonexistent, the eight communities there — known as “G-8” — have formed their own group, the Caño Martín Peña Land Trust, to improve the environment and prevent gentrification of the neighborhoods in the midst of Puerto Rico’s economic crisis. The trust was awarded the 2015 U.N. Habitat Award for its work.

Taulton said that the Carnegie Mellon students went on a bicycle tour, “learning about the solar panels and computers that were donated to community centers that the G-8 volunteers used to help the largely illiterate residents complete their FEMA forms and charge their phones so they could check on their family members after the hurricane.” While the larger-scale restoration plans dragged on, the community has been making its own efforts to improve the landscape, such as by planting flowers along the water to beautify the area and keep people from dumping trash there. However, the group didn’t see the flowers because the hurricane had stripped them away. “There was just bare ground and an algae-filled stream when we arrived,” she said.

However, it was not all bad news. A success story from the Martin Pena communities was their recycling enterprise. It was so successful that the government of San Juan contracted it to reduce the waste output of other communities.

The next location they visited was Utuado, a municipality located in the mountains where Hurricane Maria left the island. It sustained some of the worst damage from the hurricane — bridges and roads were destroyed, and many of the residents did not yet have electricity restored when the Carnegie Mellon group arrived.

There, the students learned about ecotourism on a tour with Jorge Perez, who runs Batey Zip-line Adventures. They hiked on coffee plantations and across a suspension bridge built by Perez, zip-lined, and rappelled down a cliff to a riverbed where they swam and kayaked into a cave.
“Sadly, the cave exit was blocked by debris that had been swept down by the swollen river, so we couldn’t go all the way through. But, that gave us more time to appreciate the spooky darkness and the sounds. We heard the familiar coqui, the island’s signature special frog — smaller than your pinky nail but with a voice that would make you swear it was 20 feet tall,” Taulton recalled. However, something that was noticeably absent were the bats — many of which were likely either killed during the storm or flew away.

The next day they helped Perez on his farm. She explained in the interview that not only was Perez’s farm produce entirely organic and chemical free, Perez had developed a system of raised beds to get around the rocky soil, keep plants watered, and prevent rains from washing the farm away. He also raised worms for the soil and his wife used the vegetables in the cafe they owned. He worried that with the next hurricane season approaching, the island could plunge into deeper crisis with so many still recovering from Maria. The students helped build four new raised beds on his farm.

After that, they helped a farmer in Arecibo, Jaime Jordan, clear his field of invasive weeds that took root after Maria. “His family lost their house as a result of the hurricane, and they have since been living in his toolshed. He and his wife were embarrassed by their condition and did not want to have us help them at first, but then they decided that as students, we were mentally prepared for what we would see and would want to learn,” Taulton remembered. Yet, when asked what more the students could do to help him, Jordan only answered that others needed help more than he did. “[Jordan] felt the most important thing we could do was to tell others about what we saw, and to teach people about the importance of protecting the islands’ water system...[he] wants people to come back to the mountains and care for the land,” Taulton stated.

The group also met with faculty and students from the University of Puerto Rico in Mayaguez (UPRM), where both the Carnegie Mellon group and the UPRM group presented their research on sustainability. The faculty at UPRM also took them to three communities in Anasco, where they helped clear a community garden of debris and weeds and donated their clothing to help those in need. “The teachers were so grateful for our decision to come to Puerto Rico to help after the hurricane that they insisted that we cancel our reservations at the university dorm and stay in their luxury apartments in the famous beach town of Cabo Rojo!” Taulton said.

The students helped repaint a school to convert it to a community center in Humacao, where Maria had entered the island and where many residents still had no electricity. “Painting the school may not have felt as sexy as farming, but it was a nice change to be out of the hot sun for a while!” Taulton said. A small subset of the group also went to meet with Puerto Rico Off Grid Solar Relief, a group led by Alberto Casas that aimed to restore power using solar panels and bought freezers for those who needed it. “Many of the cables and connectors for the panels...are very expensive to get in Puerto Rico, so we brought a suitcase full of them that I had bought online using funds that were donated to us. [Casas] was so shocked and happy to see them, that he completely stopped talking for a few minutes while he opened up all the boxes,” Taulton said.

The group was amazed by the resilience and accomplishments of the Puerto Ricans they met, despite the lack of federal aid some areas have received. “People in communities were rallying together, but with another hurricane season just a few months away, and no large-scale federal government response on the horizon, they will continue to need help from ordinary people like us,” she said. The campus community can learn more about Puerto Rico’s situation and help out in a variety of ways. San Juan mayor Carmen Yulin Cruz will be attending Energy Week and will be present at a fundraiser event for Rosana Guernica’s work to help the island. Besides these, there are already plans for another trip to Puerto Rico next year.