Labeling grammar policing as discriminatory is a stretch 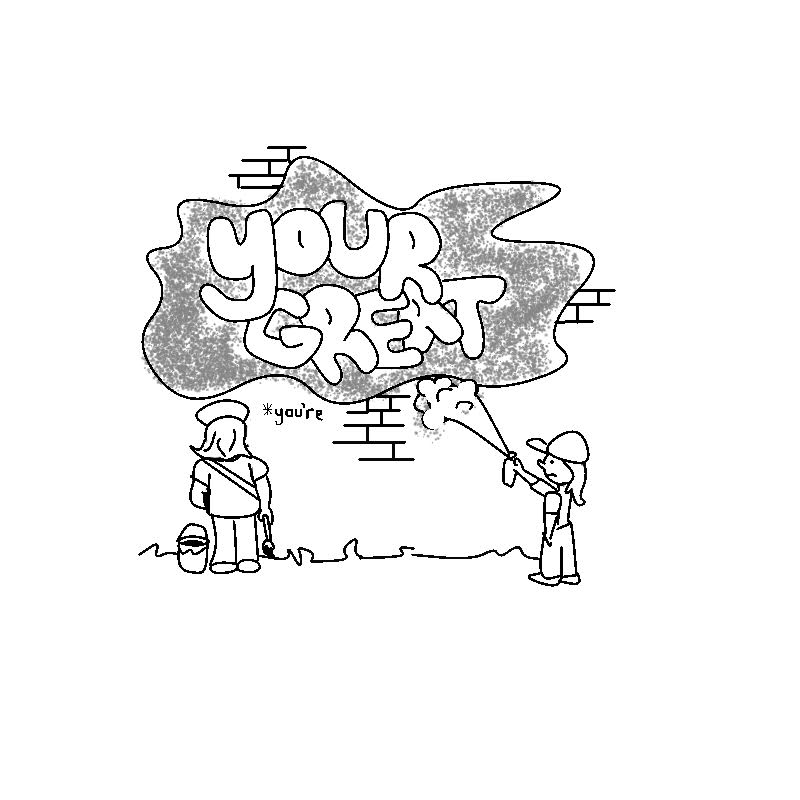 Credit: Rebecca Enright/
Editorials featured in the Forum section are solely the opinions of their individual authors.

Learning a language is difficult for anybody, especially learning one as complex as English. Therefore, it comes as no surprise that people make mistakes when writing, especially in a setting so fast-paced as social media. Sometimes spellcheck and autocorrect let us down. Other times, we might mess up on syntax. Regardless of the error, mistakes happen and most people are aware of that.

But what about pointing out grammatical errors as part of an argument?

On Twitter, a writer known as Your Fat Friend tweeted: “Reminder: unsolicited grammar policing disproportionately targets people with disabilities, poor folks, immigrants and people of color. If you can’t understand what someone is saying, ask clarifying questions. If you can, there’s no need to correct their grammar.”

To be fair, “grammar policing,” or notoriously pointing out grammar errors where irrelevant, is not a good tactic for a multitude of reasons. Grammar policing causes one to inadvertently state that proper spelling and grammar is more important than the actual topic at hand. In the time and character space spent on pointing out grammar, you could state your opinion and open up the discussion. Perhaps you might share an article supporting your argument. You could even scroll past the post and move on with your day. With all of these options open, there really appears to be no reason for one to needlessly point out an error.

To give an example of grammar policing in action, consider the following scenario: you saw a post pertaining to gun control that you disagree with. This post has several grammar errors scattered throughout, but you can still comprehend the main message and supporting arguments. You then type something along the lines of “you used the wrong ‘they’re’/‘there’/‘their.’” By pointing out this error that does not detract meaning from the message of the post, you possibly make yourself look elitist for boasting your ability to spell. Regardless of the content that follows, you still leave that first impression and inadvertently state that you care more about spelling and grammar than you do about the topic at hand. In the time and character space that you took to type your comment, you could have provided a link to a source that backs up your argument or challenges the post’s argument. Perhaps you might have stated your opinion and opened up discussion. You could even scroll past the post and move on with your day. With all of these options open, there really appears to be no reason for one to needlessly point out an error.

Each generation, despite its many differences, appears to have a common sense of optimism. The groups of youth strive to advocate for their respective perception of social justice. In this day and age, political correctness is a prominent theme. Topics such as intersectionality, diversity, and inclusion are all rampant when it comes to determining what is or is not acceptable to say or do.

“-isms,” such as elitism, ableism, and racism are all, undoubtedly, legitimate problems that deserve attention. However, claiming grammar policing to be a part of any of those problems is a stretch. Even though people who share Your Fat Friend’s sentiment most likely have good intentions and want to combat discrimination, these intentions may do more harm to these demographics that they are trying to protect.

Loosely labeling seemingly innocuous actions as discriminatory, can make the meaning of “discriminatory” appear to lose its significance. For instance, the seeming overuse of the term “racism" causes some people to become dubious of the extent of racism’s existence. For instance, in the Olympics this year, a coin toss was determined to be the tie-breaker should there be two athletes of similar accomplishments who are equally qualified to represent the U.S. and bear the flag. This method was agreed upon across the board. However, when the coin toss fell against speedskater Shani Davis' favor, he tweeted: "I am an American and when I won the 1,000m in 2010 I became the first American to [two-peat] in that event. @TeamUSA dishonorably tossed a coin to decide its 2018 flag bearer. No problem. I can wait until 2022. #BlackHistoryMonth2018." By putting the hashtag, he blamed racism, not sheer chance, on the outcome. Now, his Twitter account is private, most likely due to the backlash and criticism that ensued.

There is no doubt we need to continue the dialogue on racism. However, is calling an event that occurred based on pure chance racist promoting fruitful dialogue on racism? No. Instead, we could look at policies that disproportionally affect certain racial demographics or reflect on our own racial biases that affect how we perceive others. Focusing on policies that disproportionally affects education accessibility and poverty rates would effectively help create an even playing field across demographics. Celebrating the accomplishments of various black people throughout the years would help empower the youth. Had Davis made the tweet of his accomplishments and left out his comment pertaining to the coin toss, he could have been a source of inspiration and the Black History Month hashtag would have been relevant. However, the fact that he brought up racism when it was irrelevant made it appear as though racism is not a serious issue anymore. It's the "cry wolf" effect in action. Just as the boy cried "wolf!" and nobody believed him when there was an actual wolf, people loosely crying out "racism" in situations where it isn't applicable are causing others to become disillusioned that there is no racism.

Similarly, we should look at "grammar policing" and not resort to social justice jargon where it isn't applicable. Claiming scrutinizing grammar where unapplicable is damaging to those with disabilities causes people to be desensitized to legitimate problems and policies that go against people with disabilities. Instead, we can demand healthcare programs to be accessible to those with disabilities and help reduce the stigma surrounding disabilities. Likewise, providing accessible education for the economically disadvantaged is far more productive than denouncing grammar policing as "attacking poor folks."

Our society has great room for improvement in terms of ensuring equity and quality of life for all people. However, calling out grammar policing to fight against discrimination against certain demographics can actually serve to be detrimental to those demographics. Instead, we should focus on dialogue pertaining to policies that affect people’s lives and call grammar policing what it is: silly.