How the latest reforms to the Pittsburgh Promise will impact CMU 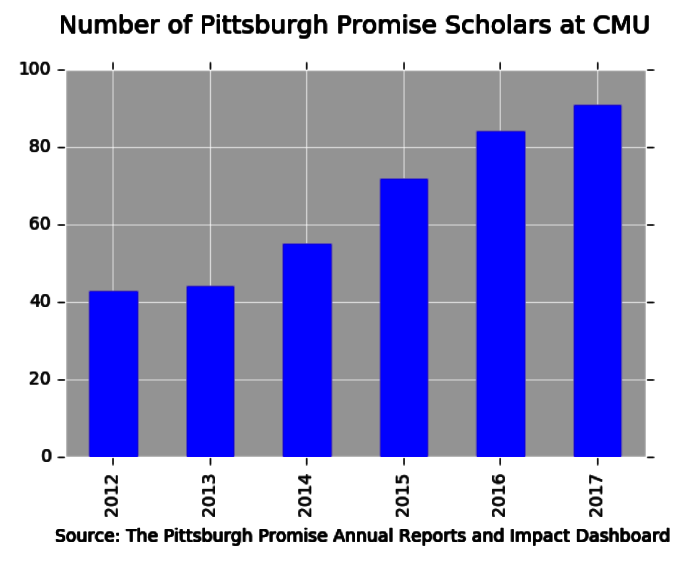 The Pittsburgh Promise scholarship announced on Jan. 29 its intention to implement significant reforms beginning with the current class of seniors in Pittsburgh’s public high schools. The changes involve lowering the maximum scholarship amount from $7,500 to $5,000 per year, while broadening full eligibility status to a larger population of students.

Previously, the scholarship amount was determined using a “sliding scale” which gave more money to students who had been attending Pittsburgh Public Schools for a longer time. A student who has been in the school district since kindergarten used to be eligible for more than someone who transferred to the district in middle school, for example. But starting with the high school class of 2018, students who meet certain criteria (namely a 2.5+ GPA, attendance record of 90+ percent, and acceptance into a college in Pennsylvania,) can receive up to the full scholarship amount so long as they have been attending a traditional public or public charter high school in Pittsburgh since the ninth grade.

Two other efforts to widen the group of scholarship recipients will soon take effect as well. The first is the establishment of a $1,000 minimum scholarship to students who receive a full ride to college via another scholarship program. The second change is the ability to spend scholarship money on room, board, and textbooks in addition to tuition.

These reforms are especially important to students whose tuition are covered by other scholarship programs but nonetheless struggle to afford other college expenses. While critics argue that this money could be better spent helping students whose tuition is not fully covered, The Pittsburgh Promise explained in a press release that these efforts are in response to a University of Pittsburgh study,, which stressed the importance of room and board support for low-income college students.

On top of being one of the many eligible colleges for the Pittsburgh Promise, since Sep. 2017, Carnegie Mellon has been a “Preferred College Partner,” one of 19 Pennsylvania colleges and universities that provide additional support to ensure the success of Pittsburgh Promise Scholars. According to Hill, the financial aid office hopes that this effort will do something to make up for the decreased maximum scholarship resulting from the recent program reforms.

By choosing to be a Preferred College Partner, Carnegie Mellon is allocating some of its limited financial aid funds specifically for Pittsburgh Promise Scholars in order to improve the University’s relationship with its surrounding community. When asked in an interview why such an approach was chosen over allocating the money to the general financial aid pool, Hill defended the decision. “It’s part of being a Pittsburgh citizen,” he said. “The program has been great to our students who have come here through the Promise, and we want to make sure that it continues.”