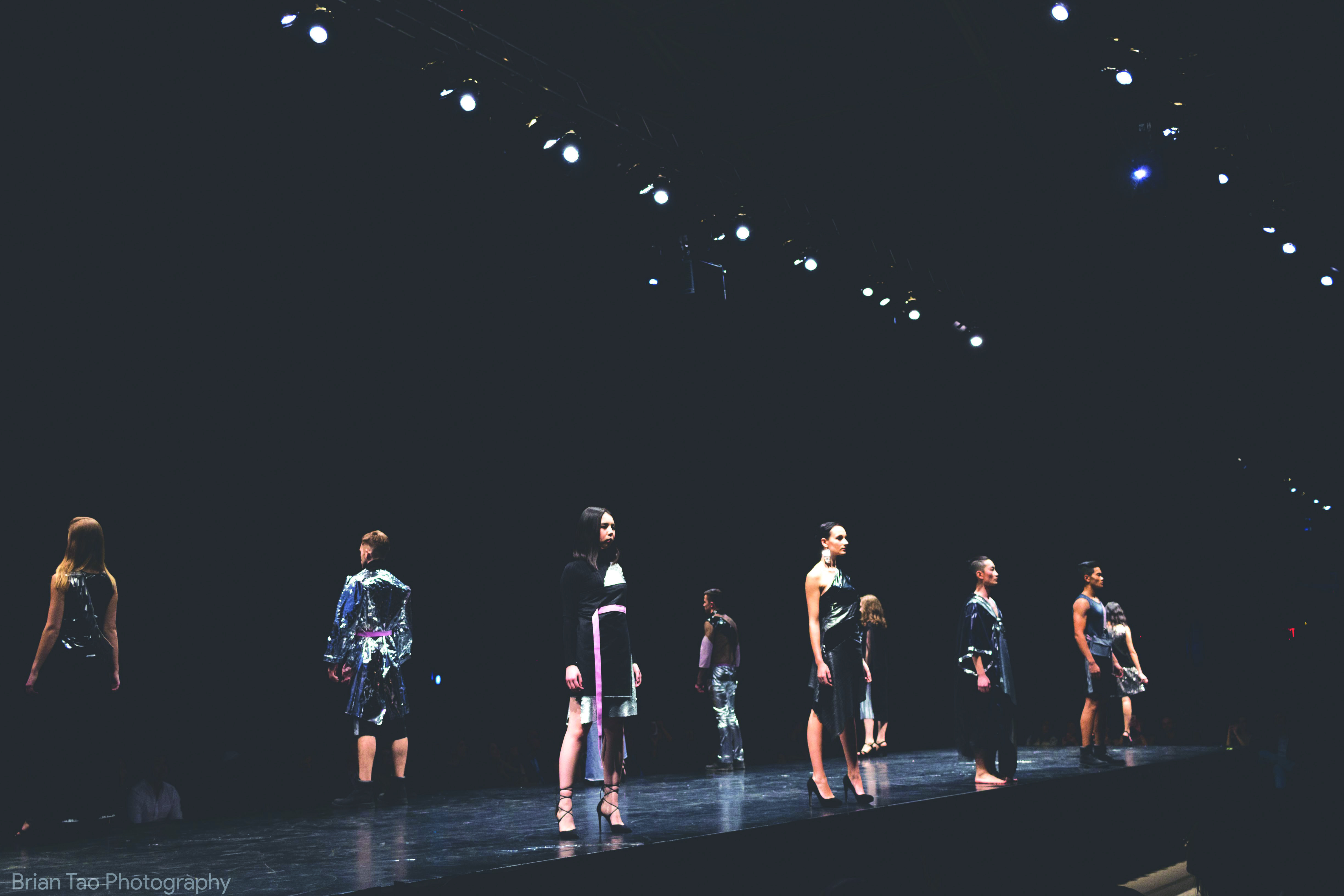 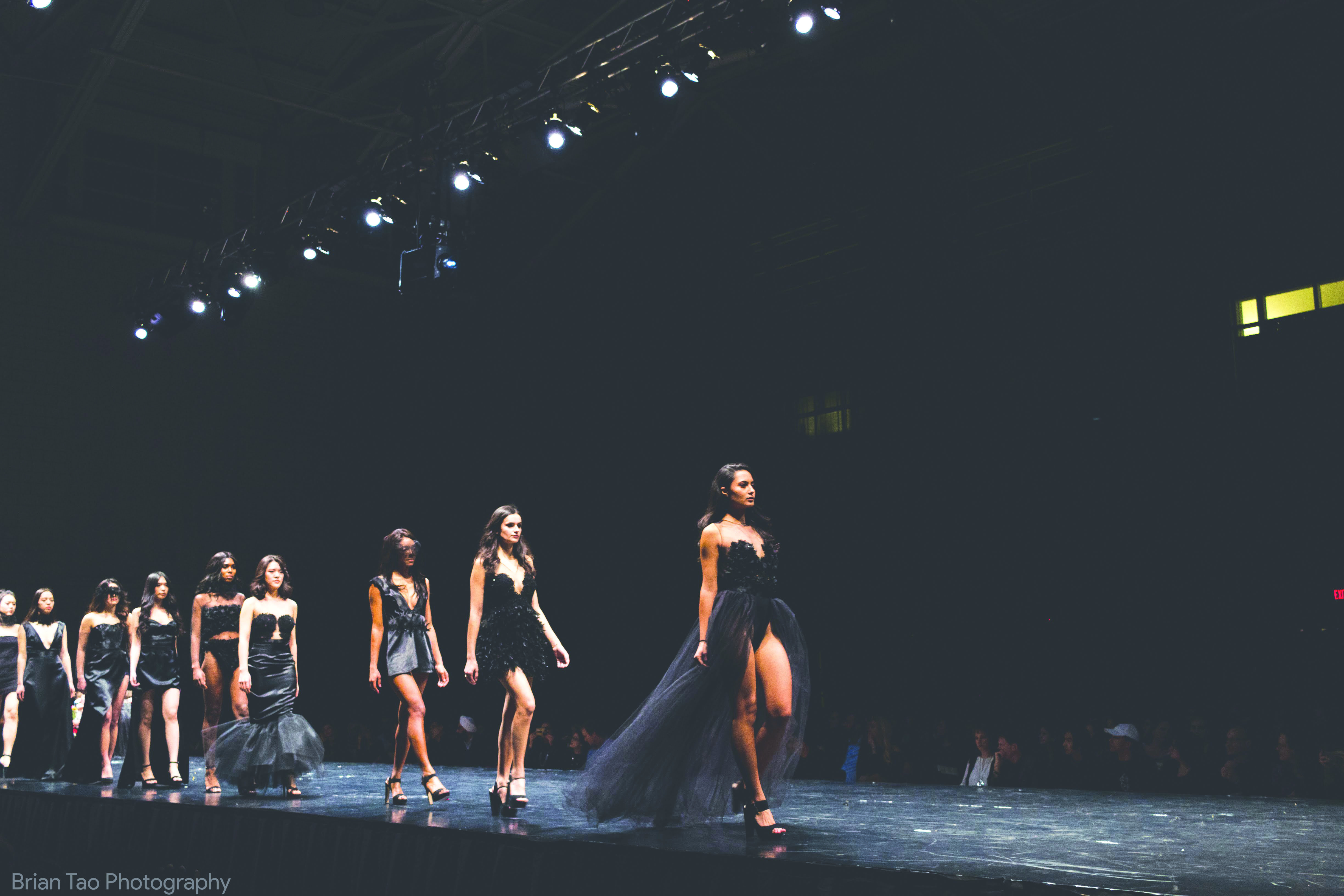 “Ferox is primal. Ferox is chaotic. Ferox is a return to instinct. Embodied by the human species, Ferox represents a blind and reckless freedom that must be contained for the sake of maintaining the civility we all value and from which we all benefit. Ultimately…Ferox must be quelled.”

The theme description for this year’s Lunar Gala, Pittsburgh’s largest fashion event, held last Saturday at the Wiegand Gym in the Cohon Center, accurately described not only the event itself, but also its atmosphere and environment. Coming from someone who can’t go a single day without incorporating black in her outfit, has a lipstick collection that contains predominantly darker shades, and who experiments with bra harnesses, leather, ear cuffs, and heels when going to class, I walked into Wiegand Gym “dressed down” in my worn-down H&M jeans, beaten Steve Maddens, and dark plaid shirt feeling severely underdressed among the amount of suits, fur coats, fringe, and velvet that I saw among the audience members.

Everything about last year’s Lunar Gala felt primitive compared to the higher level of complexity, fashion, and innovation among the dancers, attendees, and the 19 collections featured on the runway in FEROX. The show maintained a perfect balance of raw, visceral passion with modern, sleek talent among all the collections, and each one offered a different dimension, angle, and interpretation of combining those two very different worlds and concepts. Every component of the show worked harmoniously with each other, from the music choices of each collection to the overall program and order of each fashion collection to the choreography of each dance routine.

The first three lines of Lunar Gala, Maille, Chinoiseries, and Travaille, perhaps best describe FEROX’s pristine harmony under its chaotic aesthetic. The medieval-inspired line Maille, created by fifth-year senior and psychology major Noa Wolff-Fineout, establishes a great contrast of elegance and history in preparation for the more futuristic looks from the later collections, while still feeling modern for the present day. Elaborating more on the historical foundations that Maille had established, Chinoiseries, designed by junior architecture students Kornrat Euchukanonchai and Shariwa Sharada alongside senior architecture student Gunn Chaiyapatranun, has a universal, timeless beauty to it that thoroughly explores both Asian and Western cultures. Sophomore art student Ava Kling’s Travaille follows, jarringly and masterfully subverting gender norms exemplified through traditional men’s workwear in a powerful artistic statement that received a ton of praise from the audience after it was showcased.

However, these three collections weren’t the only highlights of the show. Junior art student Tatyana Mustakos and senior humanities and arts student Soojin Sohn’s Morfologia were inspired by elements of the human body to create a line that was ethereal, flowy, and dynamic. Stack, designed by freshman Computer Science and Arts student Sebastian Carpenter, perhaps was the closest collection that resembled art through its use of inorganic materials to create organic structures on the models. My personal favorite (mostly due to the collection’s love affair with black), local designer Krista Wilhelm’s Nightmare, felt current, elegant, and breathtaking. Wilhelm's collection uses the color black as a tool to create an alluring collection pulled straight from my dreams.

2268, designed by junior architecture student Hamza Qureshi and decision sciences senior Anny Fan, is incredibly innovative in its use of plants and its statement on climate change. In addition, the collection feels very central to FEROX’s overall theme, a world where Lunar Gala is run by the fictional Interplanetary Federation and the event puts human culture, or “the savagery we have successfully contained,” on display. *2268’*s agenda that it seeks to promote mirrors the passion and overall storyline of Lunar Gala’s theme. The story of FEROX, as a theme and as a show, feels like a sci-fi novel masterfully interpreted not as a movie but rather as an art piece, with each act telling a larger story on the rebellious and primal nature of humanity, and how while the Federation aims to contain it, attempts are futile and how FEROX can’t be quelled, but rather stoked.

However, at its core, FEROX celebrates humanity – its history, its body, and its spirit. Latin for "fierce," FEROX celebrates our existence through its appreciation of our global and cultural history and its thoughts and dreams on humanity’s future with a fierce passion felt throughout the entire room. Lines seek to challenge social views and put forward a message with a fierce energy that refuses to be contained. It nurtures the spirit, and FEROX uses the restrictive Interplanetary Federation as a call for freedom and revolution in all senses.

Lunar Gala’s FEROX is a celebration of Carnegie Mellon’s innovation, culture, and talent among its student body. FEROX is a movement to promote greater action and creativity. And ultimately, FEROX cannot be quelled.