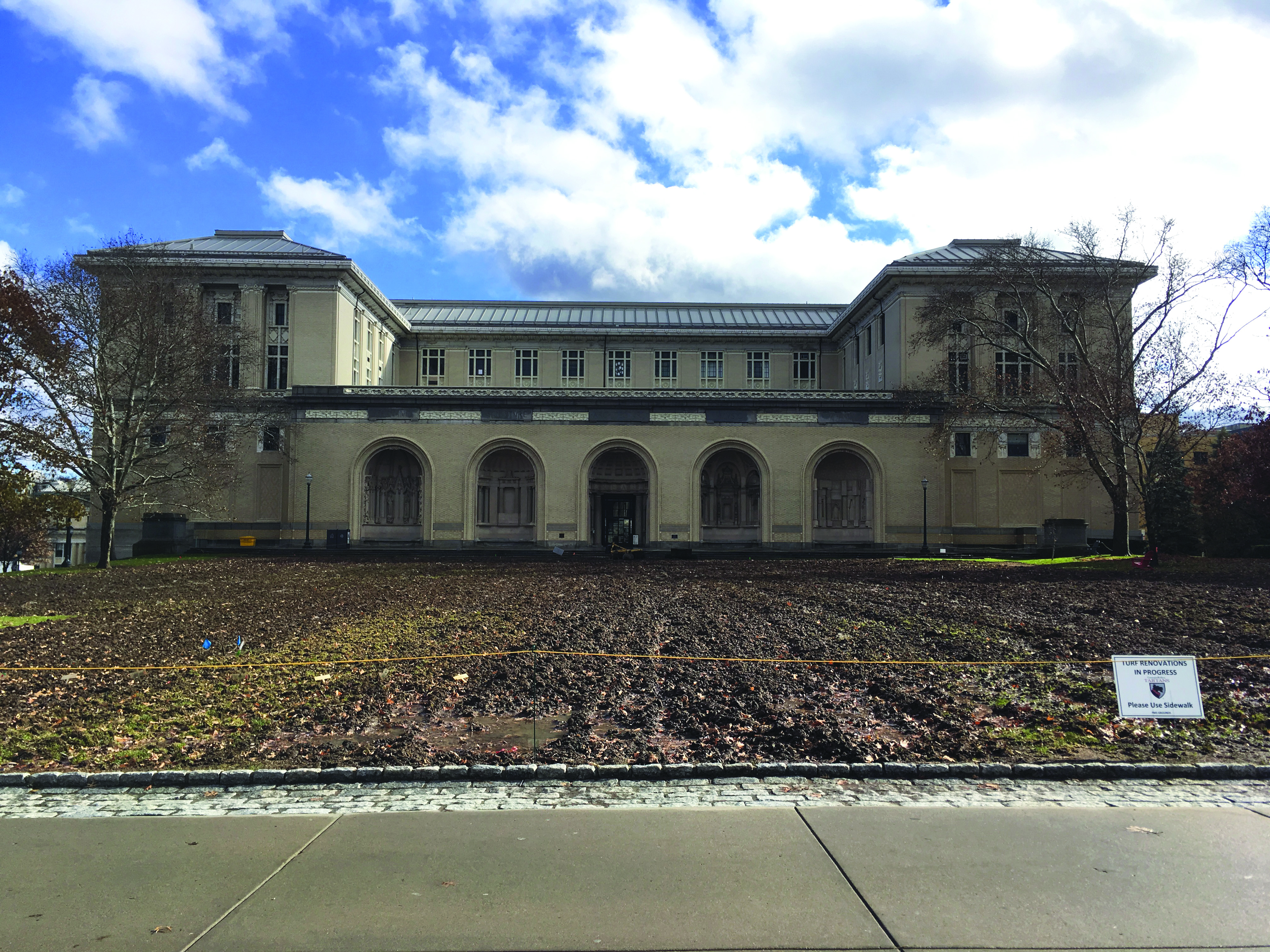 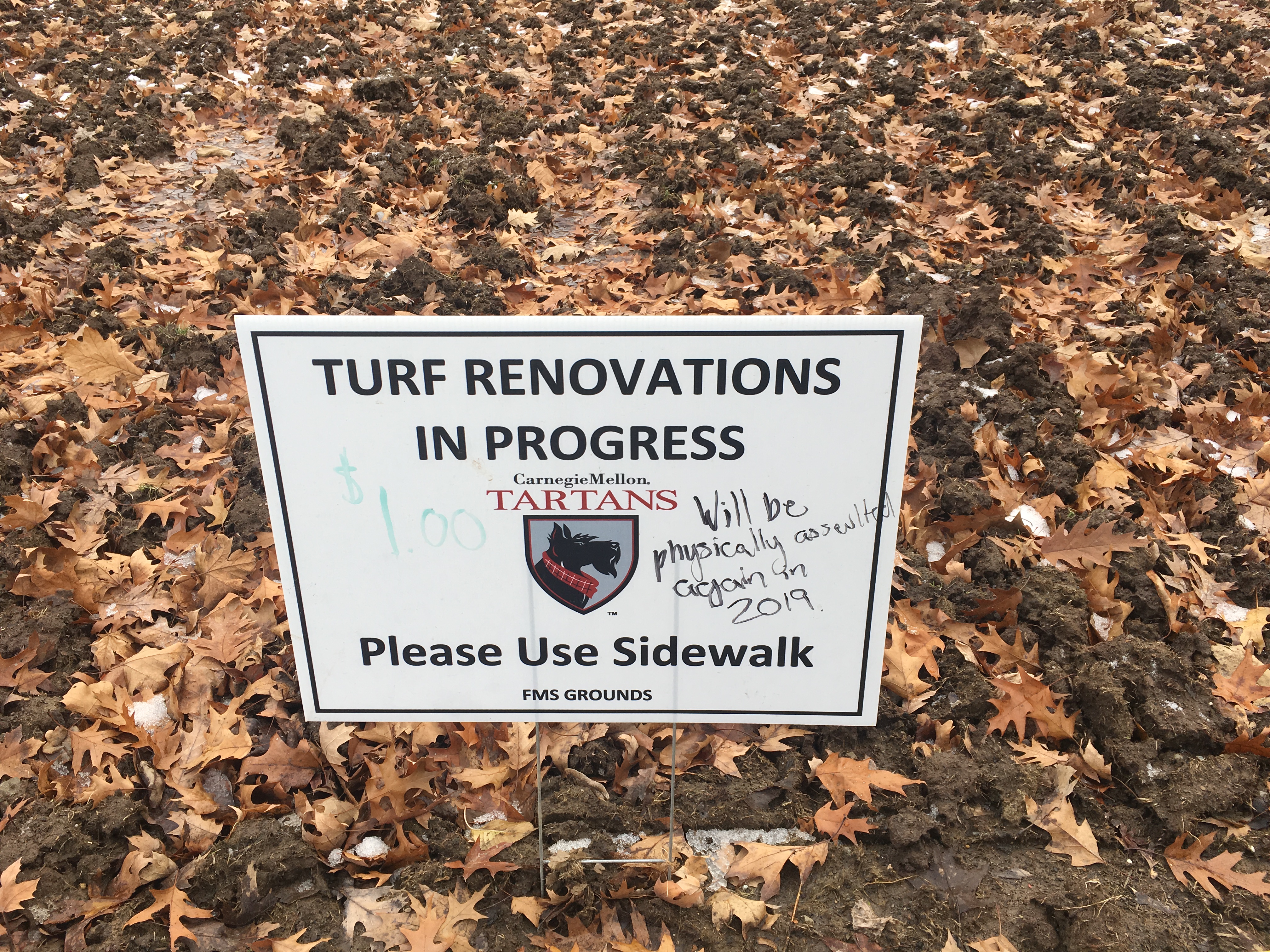 In the weeks following President Jahanian’s inauguration, one perhaps unintended consequence has arisen: the lawn in front of the College of Fine Arts building is more akin to a plowed field than a grass lawn after the removal of the large tent set up for inauguration events.

It is a situation that has left students on campus frustrated. The lawn is a common walking path and one of the first things people see when they walk on campus, but it has been almost grassless since even before the inauguration, after being previously damaged by the first-year orientation events.

The Tartan spoke with Julianne Mattera, National Media Relations Representative for Carnegie Mellon’s Marketing & Communications department, who explained that “the grass in front of CFA is typically replaced each fall following orientation because of the damage caused by the tent that is constructed in that location.” Instead of replacing the grass after orientation events this year, “the university decided to instead wait until after Inauguration to replace the grass because of the tent for that event.”

Some also worried about the cost of the landscaping work, and whether it too would be covered by the Board of Trustees funding for the inauguration tent, as The Tartan reported the week after the inauguration.

Instead, Mattera states that the replacement of the lawn is “built into the university’s operating budget,” as “the [College of Fine Arts] lawn was purposefully used for both Orientation and Inauguration, instead of using a different location for each, to minimize the cost and impact to campus grounds.”

The decision to use the lawn for two separate events and not replace the grass in the time between them was indeed an effective cost saving measure, yet, weeks after the inauguration, the grass has not been replaced. Mattera told The Tartan that “the intent was to replace the turf immediately following Inauguration, but the unusually wet November prevented that work.”

With December’s lowering temperatures and increased snowfall, however, Carnegie Mellon Facilities Management groundskeeping, who are in charge of the relawn, are surely going to face continued difficulty in replacing the grass. The Tartan reached out for a comment from them, but unfortunately, no response was given.

Since the inauguration, people continue to air their frustrations with the aesthetic of the lawn. Someone unknown to The Tartan even vandalized a sign that read “Turf Renovations in Progress - Please Use Sidewalk” with the sentence “[lawn] will be physically assaulted again in 2019.”

In terms of outward appearance, Sophia Angel, a junior in Dietrich College and a Carnegie Mellon Andrew Ambassador, told The Tartan that when giving tours to prospective students, parents, and visitors, Andrew Ambassadors “do not mention the lawn unless specifically asked because talking about the lawn is not in our tour script.”

Angel continues, “when someone does make a comment we talk about the event that happened which caused the mess,” as in the inauguration of President Jahanian. Despite some campus displeasure over the state of the lawn, Angel says “I personally don’t think the state of the lawn detracts from the appeal of CMU especially because we direct everyone’s attention to the academic mall, which is stunning.”

As of now, The Tartan is unsure of exactly when the lawn will be replaced. But as outdoor spaces typically aren’t heavily used in the winter, we can look forward to sitting on the College of Fine Arts lawn when the weather warms, at the very least.