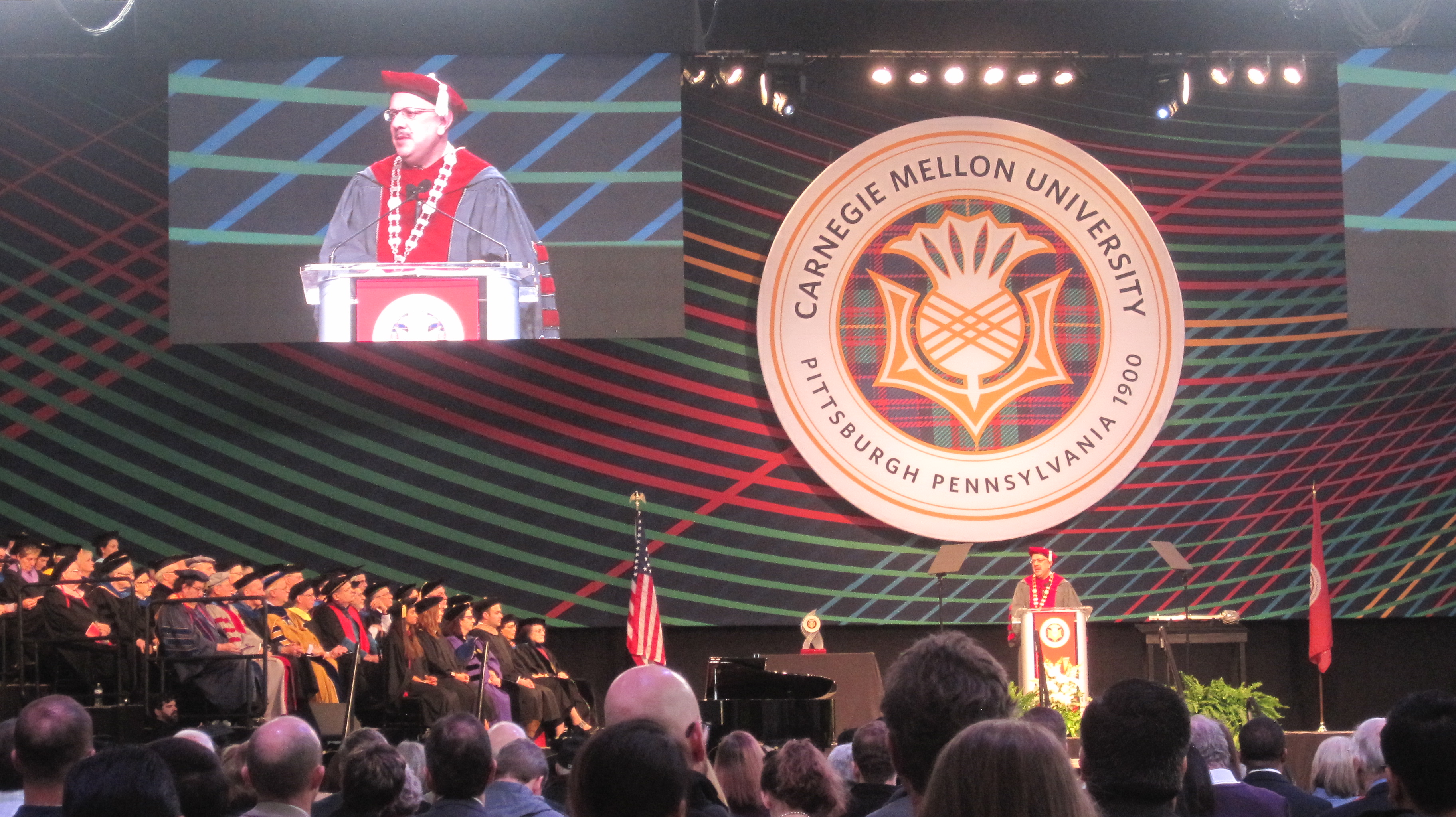 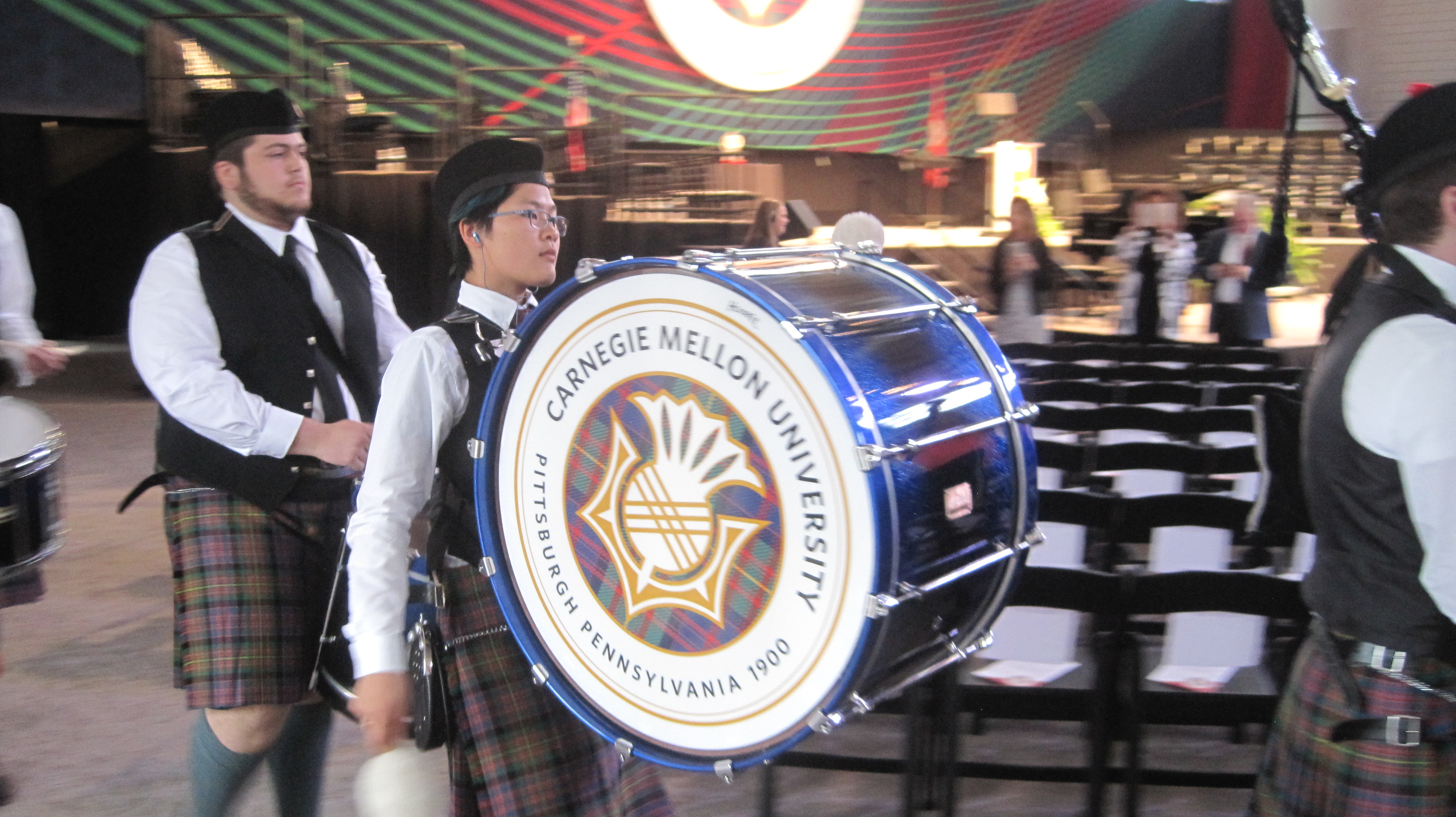 This past Friday, Oct. 26, Farnam Jahanian was officially inaugurated as the 10th President of Carnegie Mellon University. Students received a day off from school Friday in celebration of the inauguration, as well as the celebration of Homecoming Weekend.

The celebration started in the Cohon Center, where a catered breakfast opened up at 9 a.m. The line extended from the Lee Lobby, where the food was served, to well down the hallway, past the wall of Cohon Center donors.

The students, professors, and university staff in attendance cheerfully collected their breakfast under the Lee Lobby Chihuly art piece and crowded around small tables, everyone adorned with thistle-and-plaid necklaces.

At 9:30 a.m., the inauguration fanfare began. The inauguration took place in the Wiegand Gymnasium, where the basketball hoops were folded up and the woodgrain was traded for grey carpet. Modernized plaid drapes hung in front of the cinder block walls and leather fold out chair seats covered the floor of the gym, all facing a huge stage at the front.

As guests filed in, a classical orchestration hummed through the PA system. In attendance were the family of President Jahanian, as well as countless community leaders, faculty, and staff, though very few students. Many students who wanted to see the inauguration did so at campus watch parties that streamed the events.

People rushed to sit down as the first procession of bagpipers, formally known as the Carnegie Mellon University Pipes and Drums, led robed faculty toward their seats in the front of the gym. Moments later, the “esteemed platform group” was led again by the Pipes and Drums onto the stage. Last in this elite group, comprised of senior faculty, the board of trustees, and high ranking administrators, was President Farnam Jahanian.

Holding a large ceremonial chromed thistle, Faculty Marshall and Howard Heinz University Professor Baruch Fischhoff spoke first, declaring the beginning of the ceremony. A variety of speakers then gave remarks, including the first keynote speaker Keith Block, co-CEO of Salesforce and Heinz College alumni, who commended the “vision, passion, and focus” of President Jahanian, optimistically touting the future of the university.

The second keynote speaker was Martha Pollack, President of Cornell University as well as friend and colleague of President Jahanian. They had known each other since working together as faculty members at the University of Michigan. Quoting Hopper from “A Bug’s Life,” she half-jokingly reminded Jahanian that, as president, “everything is your fault,” but also expressed optimism in his leadership.

Later, Jahanian was officially crowned the President of Carnegie Mellon University with the award of a stylized thistle from Carnegie Mellon community leaders, a presentation of the charter of the University, and a detailed presidential collar. The collar had a pendant depicting the thistle with the Andrew Carnegie quote and campus motto “My heart is in the work” above it.

Farnham's inaugural address focused on Carnegie Mellon’s groundbreaking legacy, and how he intends to add to it in the future. He spoke on the incredible power that education has to change lives, and among others referenced the computer science pioneer Grace Hopper, whom he paraphrased: “The most dangerous phrase in the English language is, ‘we've always done it this way.’”

He spoke directly to Carnegie Mellon students, saying “you are my most important motivation,” and thanked them “for entrusting us with the most important chapter of your lives.” Jahanian paused mid-speech after losing track of the presidential-style teleprompter, and while finding his place in a printed copy quipped, “I didn’t realize this speech was so long!” President Jahanian concluded his speech by restating the University's four core values: integrity, knowledge, compassion, and respect, and channeling Andrew Carnegie's statement “My heart is in the work.”
Students from the School of Music passionately sang the Alma Mater as a final note of the event.

The inauguration, steeped in tradition, futuristic optimism, and plaid ornamentation, concluded at around 11:45 a.m. The Pipes and Drums procession again led the platform elite, this time off of the stage, chrome thistle in the hands of Faculty Marshall Fischhoff, followed by a cheerful President Jahanian and the rest of the group.

After the inauguration, attendees were encouraged to walk to the official inauguration picnic held in the grand, very level, temperature-treated, glass-walled tent on the College of Fine Arts lawn. The picnic featured free meals for members of the community, faculty, attendees of the inauguration, as well as university students. Many students seemed thrilled at the prospect of free food, like those who woke up for the breakfast in the Cohon Center.

Though the picnic was scheduled to run through 1:30 p.m., some students who arrived late were disappointed to find that they had run out of food. Jackie Chou, a junior design major, arrived at 1 p.m.: “I was pissed. I grabbed two LaCroix and left.”

There was some criticism of the inauguration extravagance amongst the student body. Gabriel Garcia, a Junior vocal performance major who sang the Alma Matter in the inauguration, questioned why the Carnegie Mellon student body was not more involved in the ceremony. “If this is an event for the future of the university, then why was the future not involved?”

Most heavily scrutinized was the tent. Though the Carnegie Mellon University Marketing and Communications informed The Tartan that a “small group of trustees covered the cost of the tent,” most students assumed that it was paid for by their tuition. After witnessing its construction for over two weeks, from the scaffolding system to the entirely glass walls, many students found it questionable that it was only used for a dinner, cocktail party, and a picnic, before being rapidly deconstructed.