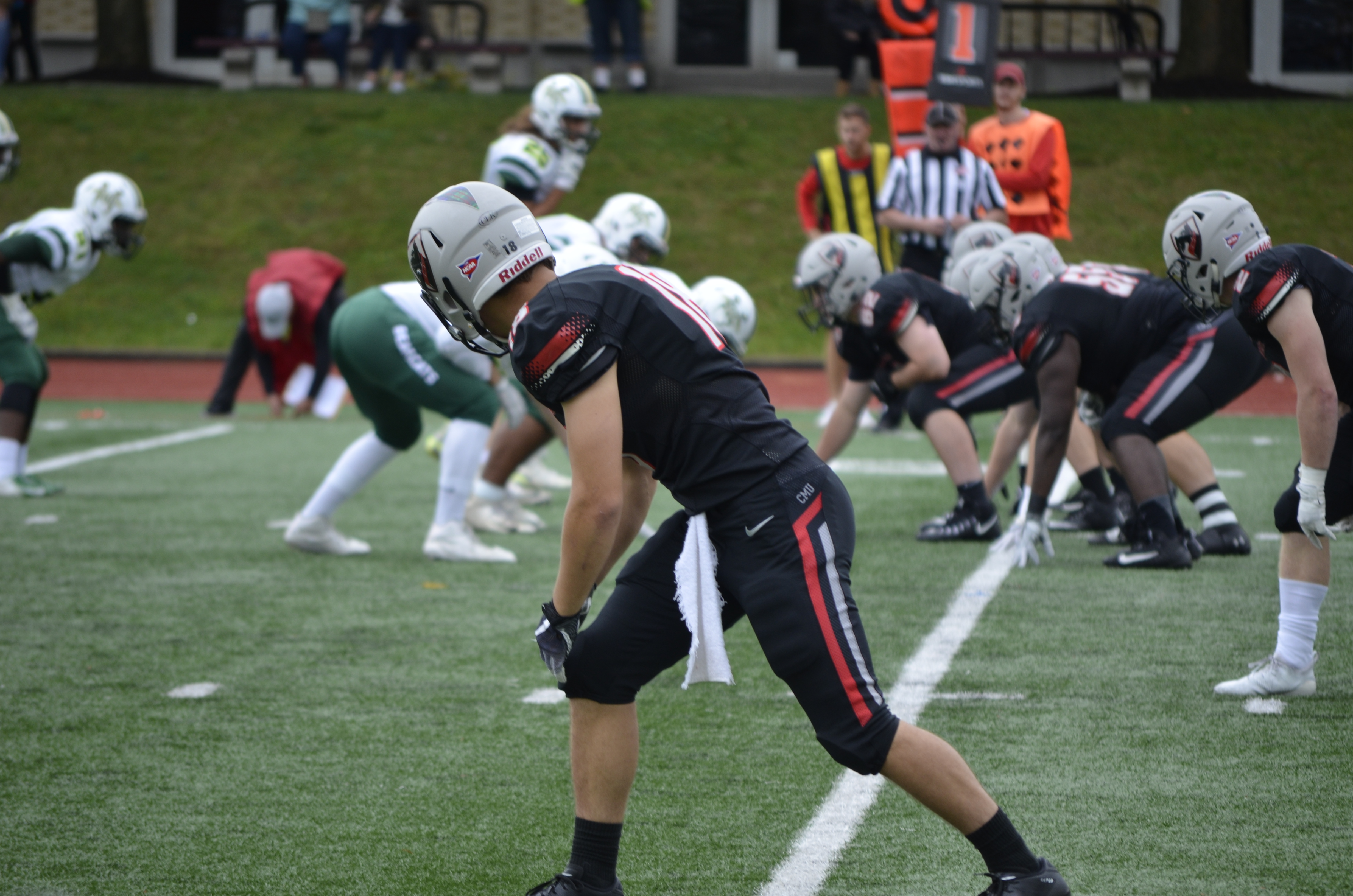 The Carnegie Mellon University football team hosted Bethany College Bison at Gesling Stadium on Saturday, Oct. 13. It was the 7th Annual Cindy Lackner Memorial Game, and was a tough back and forth matchup that was decided in a thrilling finish. The Tartans came out on top on Scotty Saturday, pulling off the win, 17–14. They now move to 3–3 overall and 2–3 in Presidents’ Athletic Conference (PAC) play.

The game started out slow, with both teams going three-and-out and punting the ball away. The quarter belonged to the defensive side of the ball.

After the first quarter finished scoreless, the Tartans put together a 10-play 51-yard drive to the get the first points on the board. On 3rd down & 2 yards from the Carnegie Mellon 41-yard line, senior quarterback Alex Cline threw to first-year wide receiver Kris Hughes, who caught the ball at midfield and crossed into Bethany territory to the 35-yard line. The Tartans made it to the 16-yard line but stalled, resulting in a 33-yard field goal by Brandon Nguyen, which opened scoring 3–0.

Bethany’s following drive ended with an interception by sophomore linebacker Darian Cohen after the ball was tipped by junior safety Thomas Polutchko. The ball went back to the offense, who marched down to the Bethany 8-yard line. However, the Tartans came away with no points after a sack resulted in a loss of eight yards, and a field goal attempt was blocked and recovered by Bethany and returned at mid-field. The Bison took advantage of the turnover and scored a touchdown, making the score 7–3.

With 1:10 left to play in the first half, the Tartan offense returned to the field. In the fast-tempo style, all plays were pass attempts. But like their last drive, the Tartans scored no points after a strip sack of Cline by the aggressive Bethany defense. The Tartans defense held the Bison for the remaining 21 seconds of the first half.

Like the first quarter, the third quarter began slowly, the first points of the second half coming in the final seconds of the quarter. After three drives ending in punts, the Tartans retook the lead with 1-yard rush from senior running back Rory Hubbard.

The score now 10–7, the Bison got the ball back with five seconds left in the third quarter. Transitioning into the fourth quarter, the Bison were unable to respond, and punted the ball back to the Tartans after a three-and-out.

In two players, the Tartans pulled away from the Bison. First was a 23-yard pass from Cline to senior halfback Karl Kumm along the right sideline to the Bethany 45-yard line. A false start penalty pushed the offense back to midfield. On 1st & 15, Cline connected with Hughes, who ran the ball in for the touchdown. With the extra point, the Tartans extended their lead to 17–7.

Later in the quarter, the Bison cut the score to 17–14 with a 11-play 75-yard drive that ended with a touchdown. With 2:47 left to play and a chance to come back in the game, the Bison attempted an onside kick, which was recovered by the Tartans. Nursing a three-point lead with less than three minutes to play, the Tartans turned to the running game to eat up the clock. On 3rd & 1, the offense decided to go to the air, but the 12-yard reception to Kumm ended with another turnover, a fumble recovered by the Bison.

The Bison had 2:23 left for one final chance to tie or take the lead. The Tartans defense, made one final stand. On their own 43-yard line, the Bison failed to convert on 3rd & 14, when senior defensive end Long Tran broke through the offensive line and blocked the pass away. On 4th & 14, a quarterback scramble threatened to change the momentum of the game, but the attempt fell just a yard short, turning the ball over on downs with 1:06. The Tartans took a knee in victory formation to close out the game.

Cline went 16-for-29 for 268 yards and threw a touchdown. With his 268, Cline became Carnegie Mellon’s all-time passing leader, surpassing the previous mark of 5,519 with his 5,746 career yards. Kumm recorded the first 100-yard receiving game after catching six receptions for 111 yards. Hughes wasn’t far behind with 89 yards on just three receptions and a touchdown. Hubbard led the running game 84 yards on 22 carries and a touchdown, adding 33 yards through the air.

After the game, Cline spoke with The Tartan about the victory, which came after two losses to Grove City and Waynesburg.

“It was an ugly win, but we pulled it out,” Cline said. “I think we can use this game as a steeping story for the rest of the season [and] can carry this momentum and focus on our next game.”

For his new passing record, Cline highlighted his team, and how every part of the team contributed to his 5,746 yards (and counting).

“Nothing gets rolling without the line blocking well and the receivers catching the ball,” he said. “It’s a great honor but there are a lot of unmentioned guys that went into it as well.”