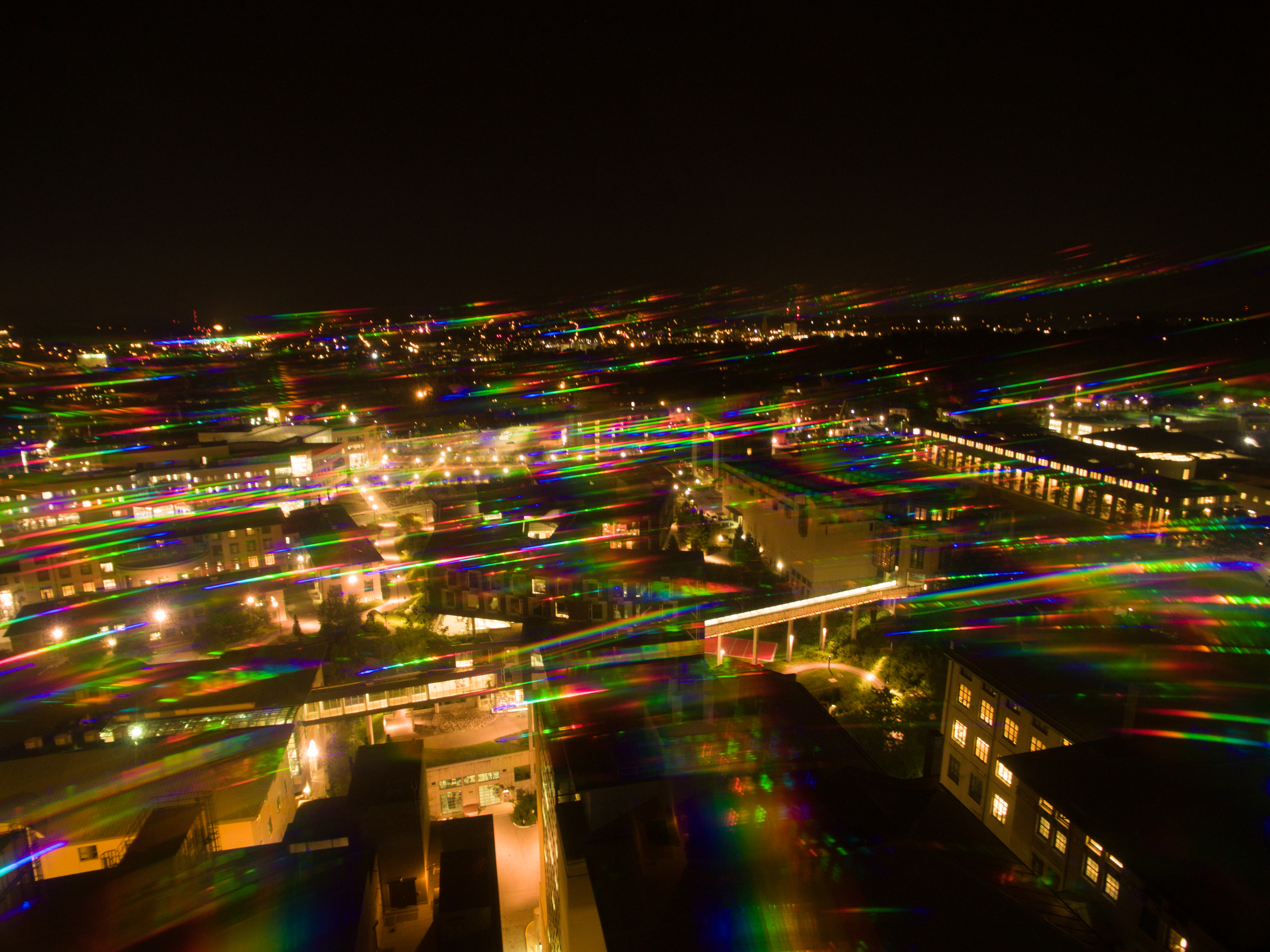 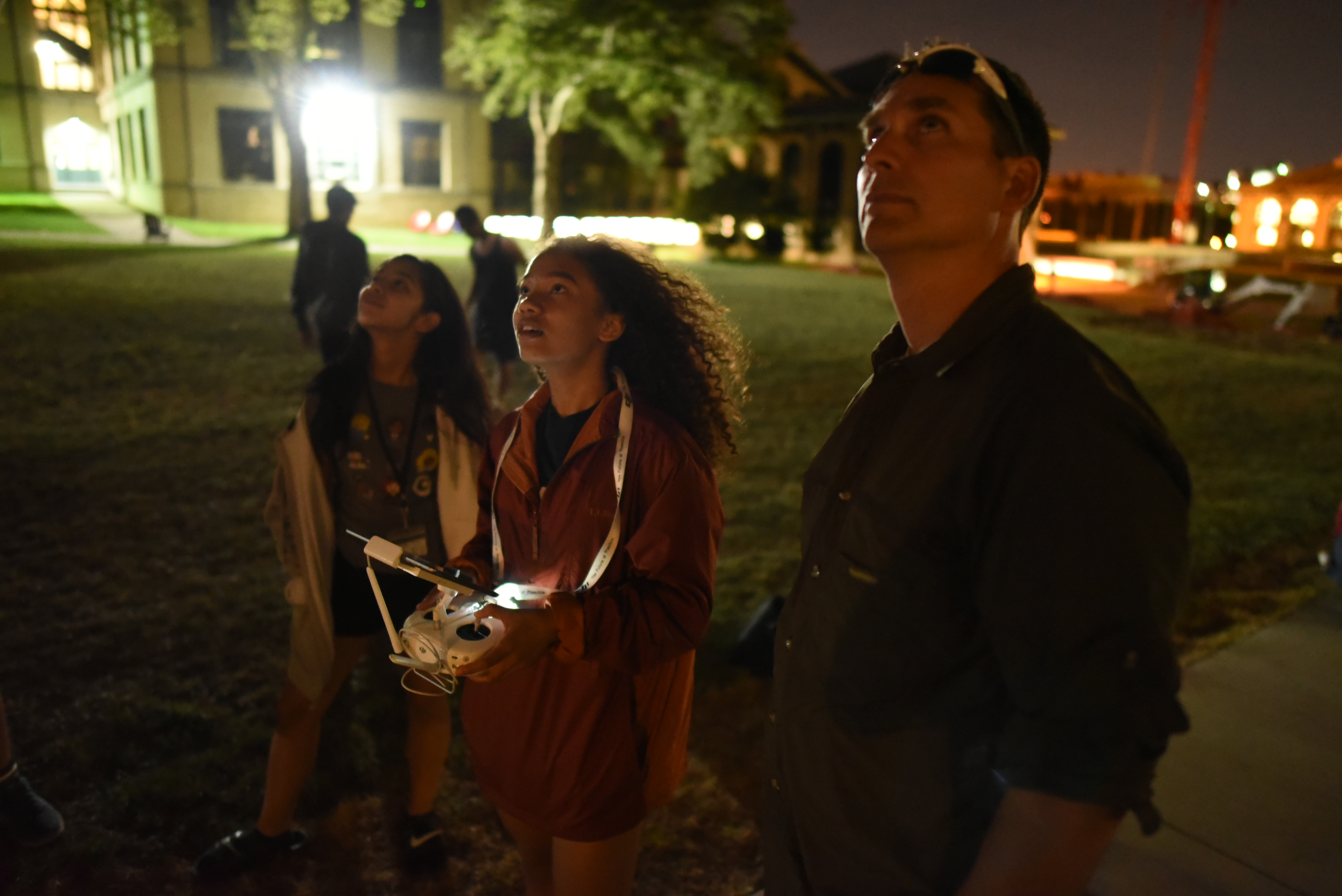 When was the last time you saw the Milky Way? Many decades ago, the vast trail of stars, planets, and nebulae making up our galaxy could be seen from almost anywhere, even urban centers. But nowadays, this view of the night sky is increasingly uncommon: for 80 percent of Americans, the Milky Way is almost totally obscured.

Light pollution, the cumulative glow emitted by street lamps, house lights, and commercial installations, has made the sky almost opaque. Over the past 20 years, researchers, state agencies, and non-profit organizations have been working to combat this problem in a number of ways, from mapping the glow emitted by man-made light across the globe, to crafting policy initiatives that would change the streetlamp grid of whole cities. Now, thanks to a grant from the Metro21 Smart Cities Institute at Carnegie Mellon, a new team of researchers is bringing the issue of light pollution home to Pittsburgh.

Led by Diane Turnshek, a professor of experimental physics at CMU, and Stephen Quick, a professor in the School of Architecture, a team of about 15 researchers, students, and night sky enthusiasts are hoping to create a comprehensive map of Pittsburgh’s light emissions using drones. Pilots would use a combination of quadcopters (drones with 4 propellers) and fixed wing drones (similar to tiny planes) to capture data-rich images of the night sky all over Pittsburgh. These images would contain data not just on how much light is being emitted, but where that light is coming from and what exactly is producing it.

In recent years, researchers have hoped to highlight the negative effects of light pollution, not just on our view of the night sky, but on the entire ecosystem. But studying these effects on a more intimate level is difficult without a detailed map. Turnshek hopes that the information provided by this project will assist scientists in figuring out the more granular effects of light pollution, and eventually even turn Pittsburgh into a hub for exactly that kind of research.

Many cities around the world have begun the process of lowering their light emissions. Local governments, from Los Angeles to Pittsburgh, have replaced a huge percentage of their incandescent street lamps with LEDs. These lights have the advantage of both emission reduction and energy efficiency, but they’re not an end-all be-all. In Pittsburgh, early efforts to replace incandescent street lamps used blue LEDs, which can actually cause more glare than the lights they replace. Blue light scatters more widely than lights with redder hues, and while the blue LEDs appeared bright white to the naked eye, this subtle difference in wavelength meant that the light they produced had more severe effects on for the environment and drivers. Other cities have experimented with lamps that only emit light downward, but without attention paid to light color, the same problem can occur, while the shape of these lamps can often reflect light off the sidewalk and straight into the sky.

Last week, the mayor’s office in Pittsburgh released a proposal to set aside $13 million for the replacement of the city’s street lamps with new amber-colored LEDs, which scatter significantly less light than their blue counterparts. Turnshek is optimistic about this proposal.

Turnshek hopes that if Pittsburgh becomes one of the few cities in America to tackle light pollution head on, her team’s research will provide before and after pictures of the night sky to allow scientists and activists in other places around the world to further their understanding and advocacy. Unlike other projects that have captured images of light emissions from high altitudes (including outer space), drones can capture both the light from the city below and a view of the night sky above. This means that if the city replaces its street lamps, Turnshek’s cameras will be able to see the effects of this change from the most comprehensive vantage point possible.

While it’s hard to imagine the impact of changing an entire city’s emissions output, the effects on the night sky would become visible literally overnight. Unlike other kinds of pollution, light emissions don’t stick around. Right now, someone in Pittsburgh who wants to see the Milky Way would have to drive for two hours away from the city. If the lamps are replaced, this time could shrink to as little as 20 minutes.

The effects of a massive reduction in light pollution are far-reaching, and poorly understood. Light emissions disrupt the lives of animal populations, from nocturnal mammals disoriented by artificial brightness, to amphibians whose mating rituals rely on the cover of night. Nighttime brightness can affect humans too, disturbing our natural sleep cycles and physically changing how our eyes adjust to actual darkness. Glare from street and commercial lighting can have effects as obvious as distracting motorists and degrading eyesight, or as subtle as changing the rate of melatonin our bodies produce in the course of a day.

More than that, Turnshek worries that separating ourselves from the universe around us can have psychological repercussions we haven’t even considered.

“There are 6000 stars in the sky we could be seeing every night,” she says, “and we see about a dozen. We have no idea what that does to us.”
Turnshek believes it’s important to know that our planet is one of many, a relatively small part of an enormous galaxy, itself a tiny fraction of the universe we collectively inhabit. There’s a provincial attitude that comes from limiting your field of vision to the dense but isolated world of modern cities, and she worries that, without a connection to the night sky, we risk severing ourselves from something integral to the way humans have understood reality for millenia.

This research project is just a stepping stone, and Turnshek hopes that in the future, more people will be drawn to the issue of light pollution, and to preserving the beauty of the night sky. She also wants this project to get new people, especially students, involved in the astronomical community in Pittsburgh.

“I need help from students,” she says. “If you can do software imaging, if you have an interest in topology, or astronomy, or if this issue is important to you, we would love to have you on board.”

Turnshek and her team will be having a meeting, open to the public, in the Cohon Center Connan room on Monday, Oct. 22 at 6:30 p.m. No experience or prior knowledge is required to attend or participate. Researchers and advocates at the meeting will discuss different aspects of the work they do to combat light pollution, including astrophotography, political activism, and even children’s book publishing.

Turnshek hopes that Pittsburgh can serve as a model for how collaboration between people as varied as artists and physicists can create real and lasting change. “We’re the only city who’s ever done something like this,” she says. “Whatever skills you have, we’ll find a use for it.”