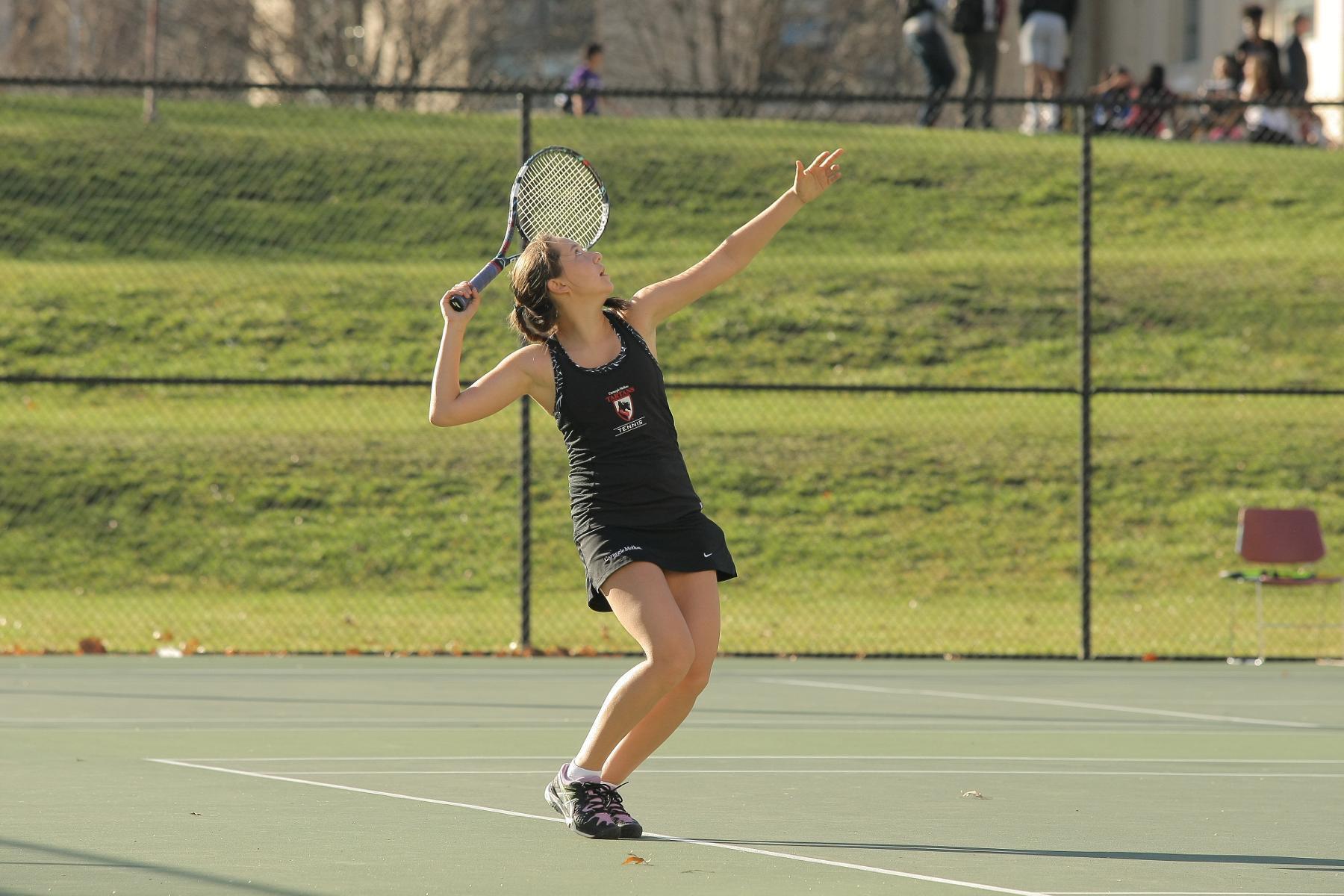 Sophomore Jaime Vizelman sets up to serve in a contested rally against her Kenyon College adversary. (credit: CMU Athletics) 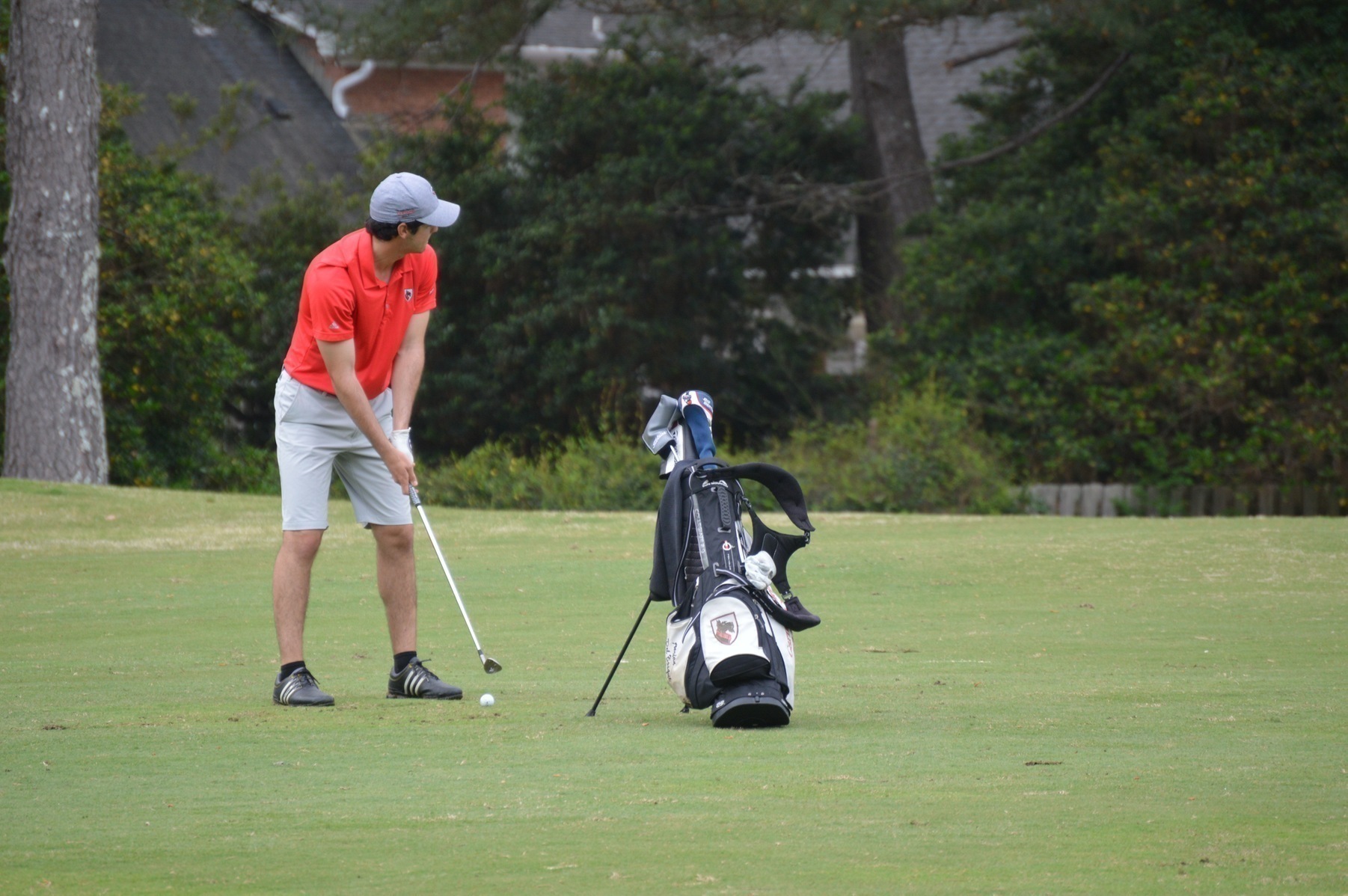 Junior Adrian Del Bosque surveys the field as he prepares to swing en route to a 155 (78–77) score. (credit: CMU Athletics)

The seventh-ranked Carnegie Mellon men’s tennis team traveled to Kenyon College to face 24th-ranked Kenyon and 26th-ranked Lewis & Clark College. The Tartans earned two victories, 5–0 versus Lewis & Clark and 5–4 versus Kenyon, to improve to 13–7 on the year.

Against Kenyon, the Tartans rallied from down one to hold a 2–1 advantage after doubles play, earning wins at second and third doubles. The second doubles team of Chen and Downing forced a tiebreaker which they won 7–4 to earn what was a pivotal point for the team. Levine’s match at first singles was first to finish, as he won 6–1, 6–0 to give the Tartans a 3–1 lead.

Kenyon tied the score at three-all with wins at second and fourth singles and took a 4–3 lead with a victory at third singles. Kirkov closed out his sixth singles match with a 6–2, 6–2 win before Arora earned match point with a 7–5, 7–6 (7–3) win at fifth singles. Arora trailed 5–1 in the first set before winning six straight games.

The Tartans will next face the no. 16 University of Mary Washington on Saturday, April 8 and no. 20 Johns Hopkins University on Sunday, April 9. Both matches will be played at home in Pittsburgh.

The 12th-ranked Carnegie Mellon women’s tennis team traveled to Kenyon College to play the 32nd-ranked Ladies on Saturday, April 1. The Tartans won 5–4 and move to 12–6 for the season.

After doubles play, the Tartans led 2–1. The number one pair of senior Nicholle Torres and junior Cori Sidell finished first with an 8–2 win, while junior Katie Lai and sophomore Jamie Vizelman put the Tartans ahead 2-1 with a 9–7 win in the third position.

The Tartans will next host the no. 17 University of Mary Washington on Saturday, April 8 and No. 15 Johns Hopkins University on Sunday, April 9.

The Carnegie Mellon men’s golf team carded a final round of 298 at the Wynlakes Intercollegiate in Montgomery, AL, on Tuesday, March 28, and finished third with a 36-hole score of 589 (291–298). The field of 13 teams, including five teams ranked in the top seven nationally, was won by the host Huntingdon College, ranked first nationally, with a score of 567 (280–287). The University of Texas at Tyler, ranked second nationally, placed second with a score of 578 (296–282). The 36-hole event was played at the par 72, 6,979-yard Wynlakes Golf & Country Club.

Senior George Qian continued his school record performance on Tuesday, as he carded a two-under par 70 for a 36-hole score of seven-under par 137 (67–70). The senior finished second on the individual leaderboard, as Huntingdon’s Addison Lambeth carded a 10-under par 134 to win individual medalist honors. Qian’s two-round score of 137 breaks the school record score of 139 set by junior Adrian Del Bosque in 2015 at the Edward Jones Shootout at The Links at Spring Church.

On Thursday, the Tartans placed first at the annual Carnegie Mellon Spring Invitational for the second consecutive season after carding a 304. The 18-hole event was held at the par 70 Longue Vue Club in Verona, PA. Top individual medalist honors went to Mohan who fired a four-over par 74. The win marked Mohan’s first collegiate individual medalist honor. Qian and Jennette tied for second individually in a field of 54 golfers, as both entered the clubhouse with a 76. Berger placed fifth after carding a 78 on Thursday while Del Bosque finished with an 82.

The Tartans had three individuals play in the invitational with senior Alex Woodward leading the trio with a score of 82. Senior Alexander Pomerantz fired an 83 and sophomore Nicholas Moreno carded an 86.

The Tartans will next compete at The Hershey Cup at Hershey Country Club in Hershey, PA, on April 2–3.