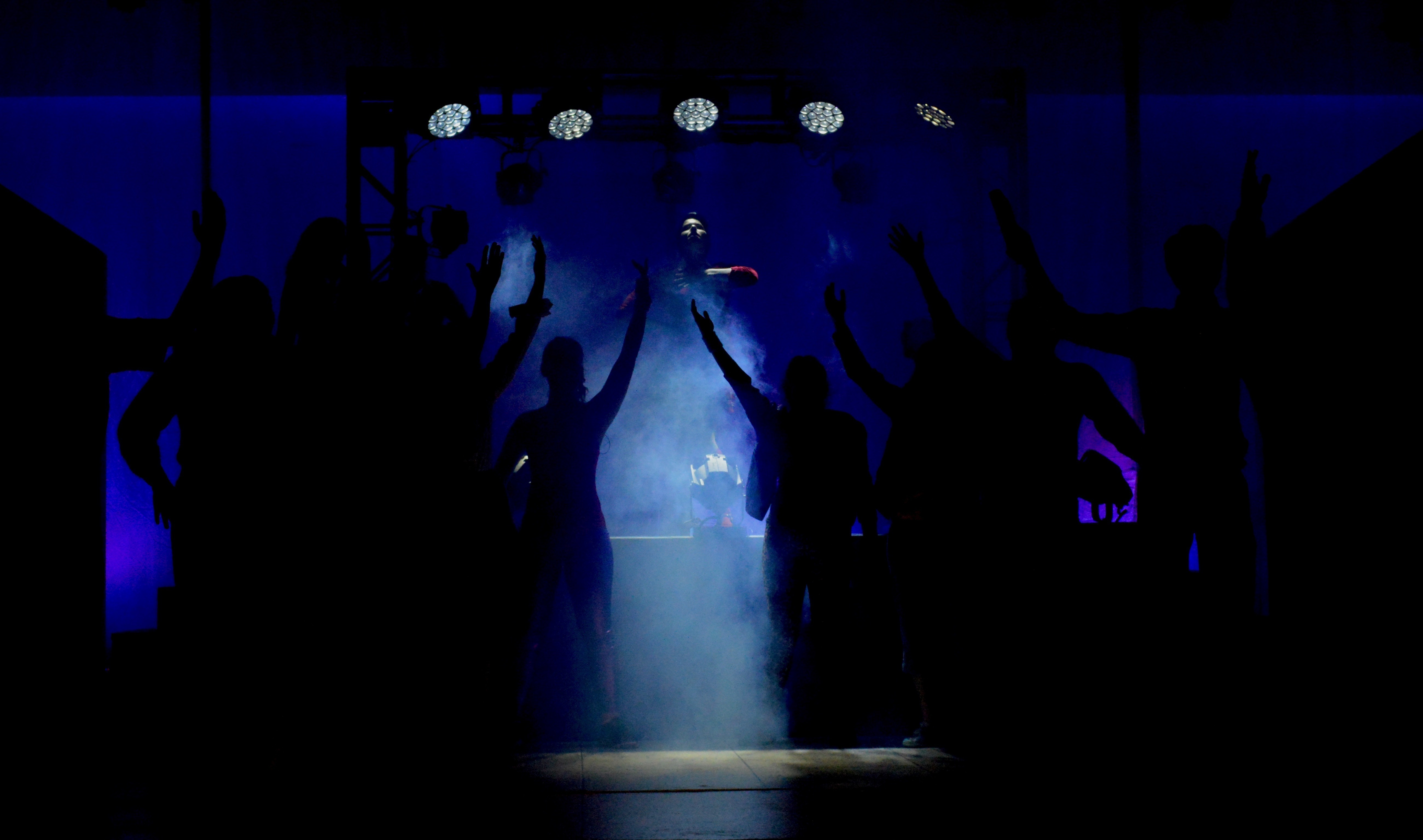 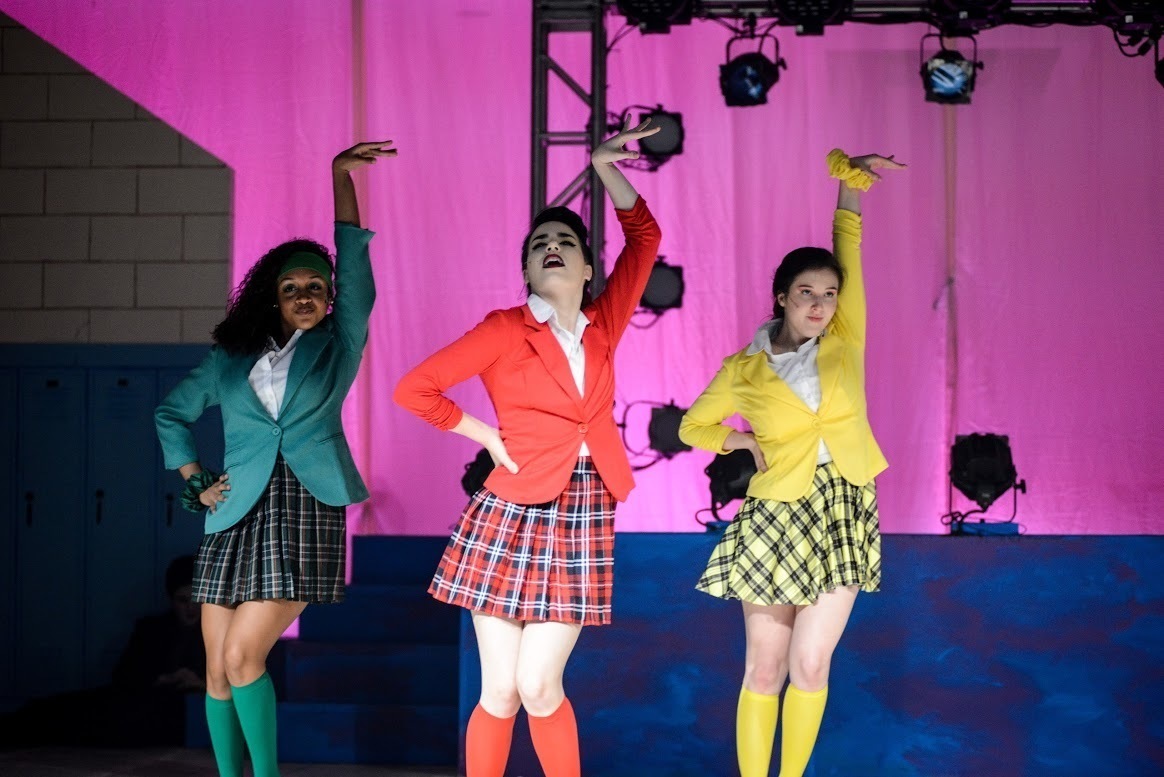 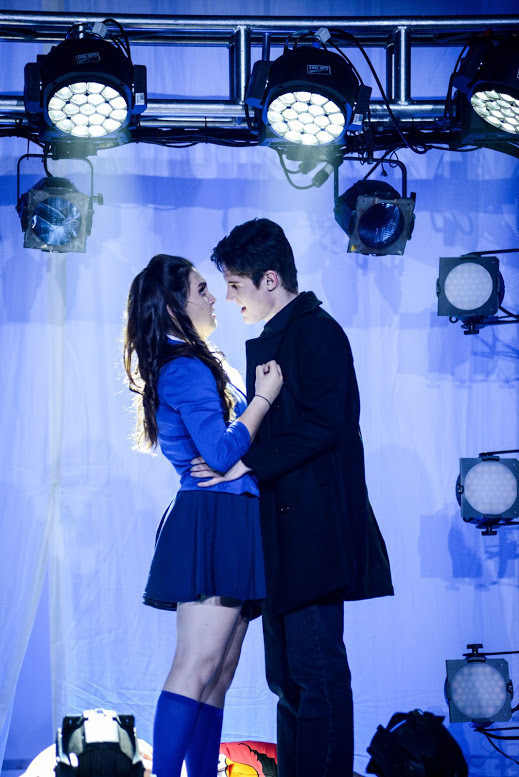 When I first heard that the Scotch’n’Soda production for Carnival would be Heathers: The Musical, I was wary. Having watched Heathers, the 1988 film on which it is based, I was unsure of how such a dark and racy movie would translate to musical theater without becoming corny. There was no need to worry, however. Adjustments to the plot, catchy songs, raunchy humor, and, above all else, an extremely talented cast turned Heathers: The Musical into an undeniable success.

Set in suburban Westerburg High School, Heathers follows Veronica, the newest member of the most popular clique. The group is comprised of her and three other girls: Heather Duke, Heather McNamara, and the leader, Heather Chandler. Veronica, however, doesn’t actually enjoy spending time with the Heathers, but tolerates their bratty, rude behavior because they make her popular. Veronica becomes enamored with a mysterious new kid, J.D., and after angering Heather Chandler at a party and realizing her social life is about to come to an end, she boldly sneaks into J.D.’s room and sleeps with him. The next morning, while apologizing to Chandler, Veronica unintentionally gives her a poisonous concoction crafted by J.D. He convinces her to fake a suicide note, but his malicious intentions are revealed as he tries to kill more of their classmates.

The musical changes several plot points from the movie, and these alterations heighten the character’s emotions and strengthen their motivations. One of the biggest changes is removing Betty Finn, Veronica’s nerdy childhood friend, and adding her role to Martha Dunnstock, the victim of much of the bullying at Westerburg High. Since Veronica is formerly friends with Martha Dunnstock, their relationship feels more significant than in the film, giving Veronica more reason to be bothered when the Heathers tease Martha. Martha’s later attempted suicide becomes a far more powerful motivator for Veronica to restore peace to the school, and also makes it a much sadder moment for the audience.

This fusion of characters also changes the relationship between Heather Chandler and Veronica. In the movie, Veronica draws the wrath of Chandler for not having sex at the frat party they attend. However, in the musical, Veronica stops a game at a party that Chandler created to humiliate Martha in front of the rest of the school. While Chandler’s behavior in the film is rude and certainly not that of a good friend, the changes made in the musical make it an even more powerful breaking point for Veronica as she turns on her clique.

My worries about the music making the story too corny were immediately dispelled. The soundtrack expertly walks the line between funny and dark — but much of this can be credited to the two fabulous first-year leads: vocal performance major Sophia Masterson as Veronica, and economics and statistics major Alec Albright as J.D. Masterson showed off her impressive range and handled Veronica’s ever-shifting emotions with ease. She balanced her character’s vulnerabilities and motivations well, showing Veronica’s doubts about J.D. while falling for him regardless, and her impeccable timing added humor to her role. She blew the audience away with her confident singing on “Dead Girl Walking” and beautifully conveyed Veronica’s desire for a return for normalcy as she pleaded with J.D. on “Seventeen.”

Albright perfectly captured the shady-but-sexy effect used by Christian Slater in the film. Albright used his expressive voice to fill his songs with feeling and his dynamic range to switch emotions both within individual songs and through the scope of the entire show. On “Our Love Is God,” Albright quickly alternates from loving and soft to high-intensity and out-of-control. Another standout track is “Meant to Be Yours,” where J.D. reaches his breaking point, and Albright manages to scream with anger while still staying melodic.

The rest of the cast impressed as well. Sophomore music major Daniel Brennan as Kurt and sophomore information systems major Walter Donnellan as Ram were hilarious, perfectly capturing the juvenile humor of the idiotic jocks with their goofy smiles and over-the-top fist bumps. They excelled on the hilariously vulgar “Blue,” where they crooned about their genitals while breaking out jazz hands and other ridiculous dance moves. Senior electrical and computer engineering major Don Zheng and junior electrical and computer engineering major Russell Hawkins were also strong in their roles as the jock’s fathers in their comedic song “My Dead Gay Son.”

Other members of the cast stood out for their dramatic performances. Sophomore vocal performance major Marina Byrne, who played the bossy Heather Chandler, was a commanding presence — she owned the stage during her scenes. The Heathers — Byrne, senior decision science major Alexis De La Rosa, and sophomore bachelor of humanities and arts in dramaturgy and professional writing major Anna Jamieson Beck — mesmerized the audience with their dancing and harmonizing on “Candy Store.” Sophomore vocal performance and creative writing double major Sydney Roslin, who played Martha Dunnstock, stunned the audience with her heart-wrenching performance on “Kindergarten Boyfriend.”

Despite a few technical hiccups, Scotch’n’Soda’s rendition of Heathers: The Musical was a major success, aided by a dark but funny script that preserved the character of the original film and was bolstered by standout vocal and acting performances from the entire cast.