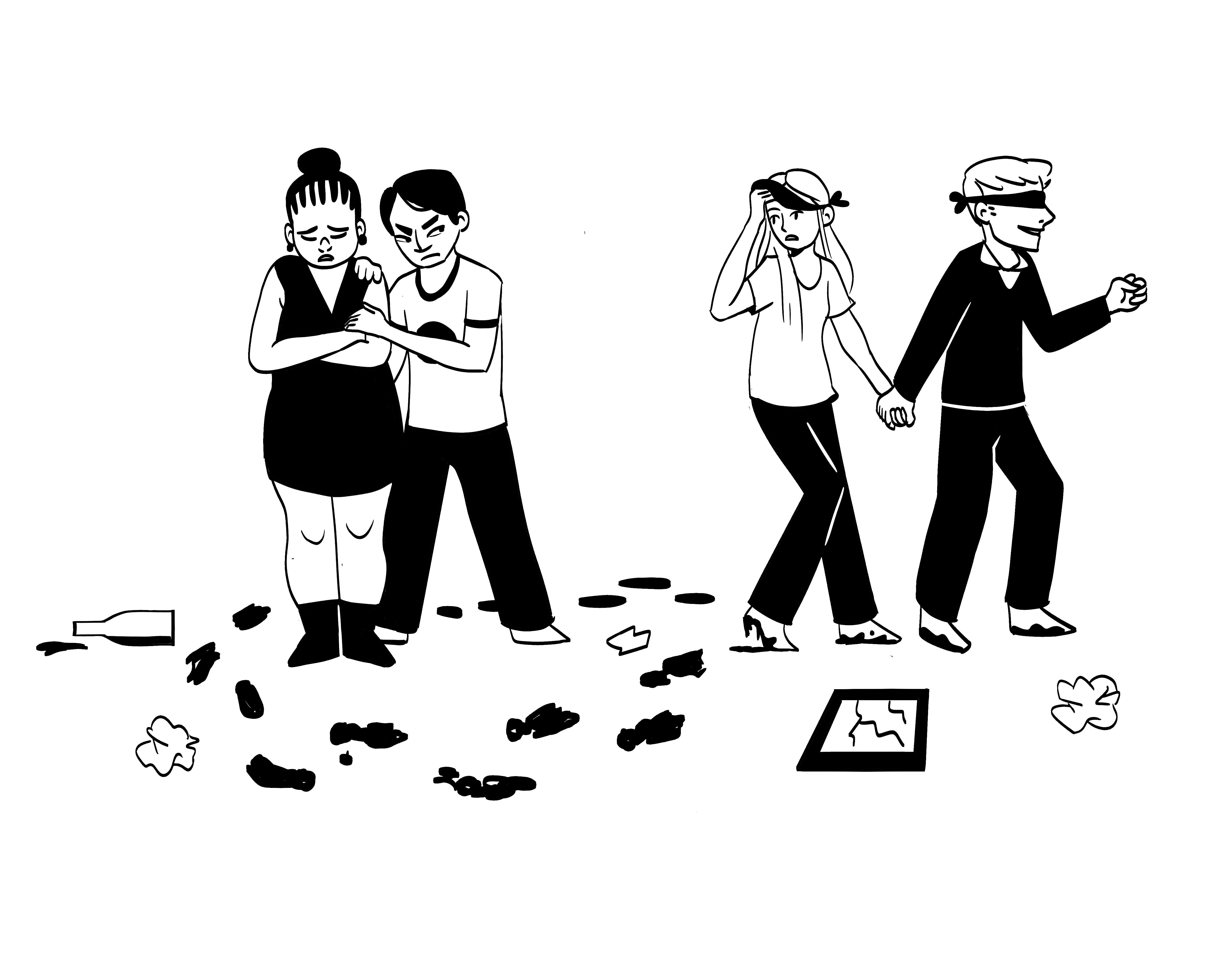 Credit: Anna Boyle/
Editorials featured in the Forum section are solely the opinions of their individual authors.

You are racist. Maybe you are a perfectly nice person. Maybe you have twenty friends of color. Maybe you treat people of color the same way you treat white people. Maybe your life is terrible and difficult on a daily basis. But you are racist, I am racist, we are all racist.

This is not name-calling or a judgment of your character. You probably didn’t choose to be racist — you were probably born into it — yet, here you are, and you contribute to racial oppression. Racial oppression is not just composed of obvious individual acts. Rather, it is primarily a system of small, subtle interactions that we, as white people, might not notice contribute to a greater picture unless we are really paying attention. Whether we realize it or not, we all play a role in these systems, and it is high time that we started paying attention.

It’s not about what you do — it’s about how your actions are received. A white person with a “thing for Asian chicks" may ostensibly be attracted to Asian women because of their physical characteristics, but the why of it doesn’t change the fact that this type of fetishism adds to the oppression of Asian women. We, as white Americans, treat Asian women like exotic foreigners, denying them the status of "real Americans" even if they and their families have lived in the United States for generations. Additionally, as Rachel Kuo describes in her article "5 Ways 'Asian Woman Fetishes' Put Asian Women in Serious Danger," the media perpetuates a stereotype that Asian women are more sexually submissive than other women. This the stereotype is not just limited to movies and TV shows — Kuo suggests that a common reason white Americans often find Asian women attractive is due to a subconscious internalization of the stereotype. She argues that the stereotype is dangerous, as Americans expect Asian women to be submissive even in the face of abuse and mentions that up to a whopping 61 percent of Asian women in the U.S. experience intimate partner abuse at some point in their lifetimes.

No matter how well-meaning you may think you are, you can't prove the exact reason for something as subconscious as a sexual preference. And even if you could, singling out Asian women as more attractive because of their race is still racist, because doing so has the same effects as other individuals doing so and goes right along with a system that fetishizes Asian women to less innocent ends. At best, fetishizing Asian women makes them feel othered and objectified, and at worst, it complies with a culture that violently abuses them at higher rates than women of other races.

We have created an environment that is hostile and alienating to people of color. Now that we have finally started to improve the system with socialist programs, such as welfare, that are disproportionately needed by people of color and affirmative action programs so that people of color can (at least sometimes) hope to actually achieve something when they work hard, we still refuse to acknowledge that people of color face extra barriers to success and deny that socialist and affirmative action programs are still necessary for achieving fairness. Instead, when people of color succeed, we attribute their success solely to these programs and tell them they are less smart, less hardworking, and generally less deserving of resources and success than white people are.

It is not a surprise that black people feel like they must constantly work to impress white people just to appear “normal”. The Atlantic recently published a video in which then-President Barack Obama explains how he was able to break through the race barrier and become president of the United States. Obama notes that he is unique as a black person in that he was raised by white people who loved him. This positive personal history with white people allowed him to trust us. Obama argues that most black people struggle with gaining power and prestige in America in a way that he didn’t have to because, for most black people (including his wife, Michelle), walking into a room full of white people inevitably requires the extra work of having to prove oneself that a white person walking into the same room would never be expected to do. The idea that black people have to do an unequal amount of work to achieve success can discourage them from pursuing their dreams as vigorously as Obama was able to. White people don’t even have to do anything to be contributing to racism — if we are not actively validating the talents of people of color, we are forces for oppression in their lives.

Above all, we have the privilege to remain ignorant. If you or I hear a racist joke, we get to decide whether or not to be hurt because the joke doesn’t directly insult our personhood. We’re fortunate enough to have civil debates with truly dangerous people and leave with only our worldview offended. People of color are not so lucky. They don’t get to just opt in and out of oppression. The opposition to racist language is about more than preventing hurt feelings — it’s about opening up the debate to marginalized people whose voices are not traditionally heard and allowing them the same level of comfort in spaces of power that we allow ourselves. It is easy for us to dismiss people of color and their allies as “special snowflakes” when it is not our freedoms up for debate and we are unable to experience firsthand how deeply racism really affects people of color, but we can and must challenge ourselves to do better. When we think that a person of color is overreacting to something we’ve said, we need to realize it means that we aren’t seeing their full perspective and need to educate ourselves more.

In calling out your racism, I am not blaming or insulting you. Rather, the word “racist” is a call to action. We need to recognize the privilege we hold and the power we have to make a difference. As one of the wealthiest and most powerful segments of the country, we are in the best position to dismantle systems of racial oppression, and that starts by making changes in our everyday lives.

We must invite people of color into white spaces of authority with open arms. We need to smile more and initiate more conversations and friendships with people of color, make them feel cared about. We must appreciate everything that people of color do for us and for themselves. We must listen to and believe their stories and elevate their voices. It is our job as white people to call each other out and educate each other on how our actions contribute to systemic oppression as well as recognizing our own problematic behaviors. We can only begin to change these extensive systems if we act together.