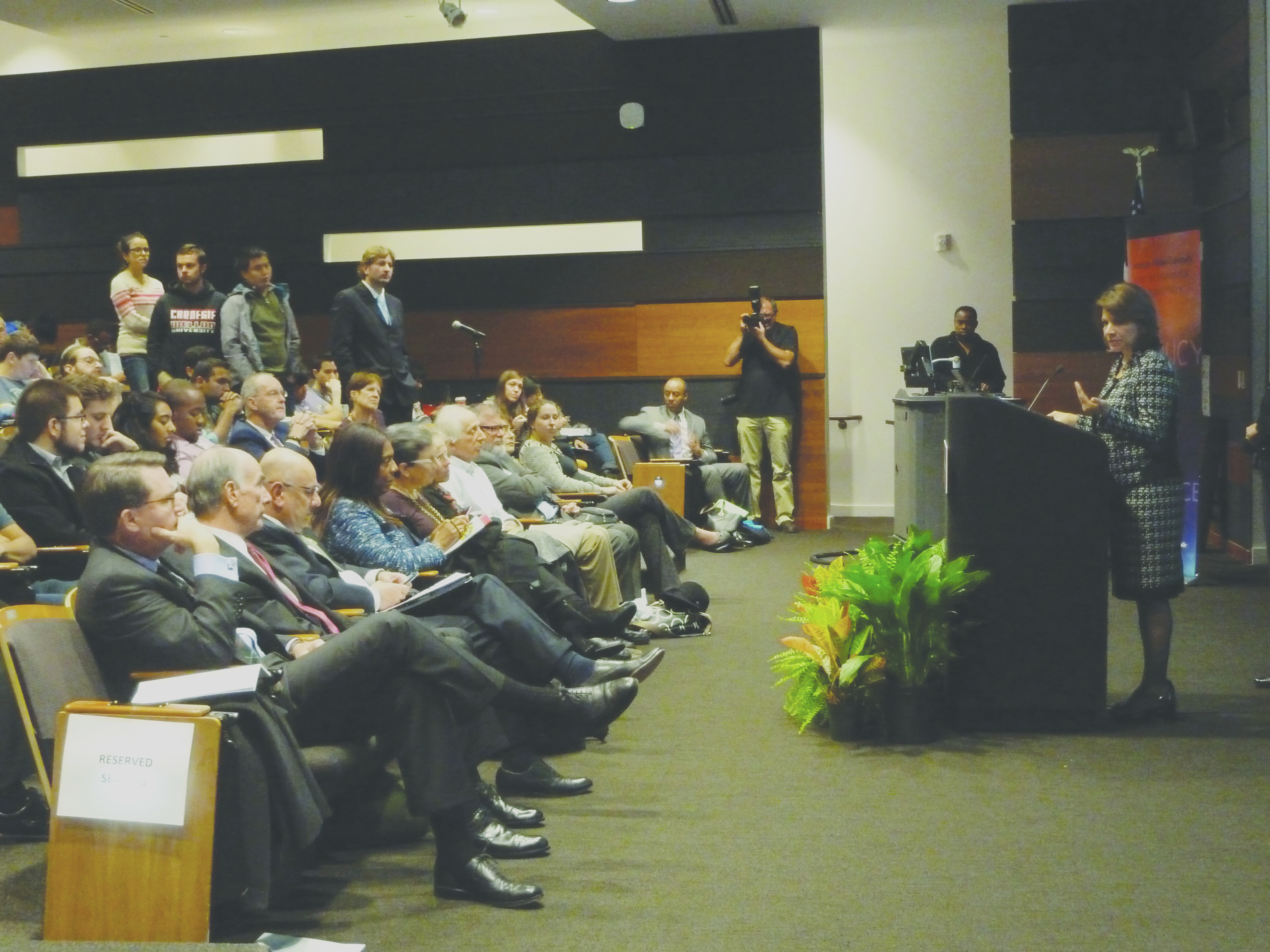 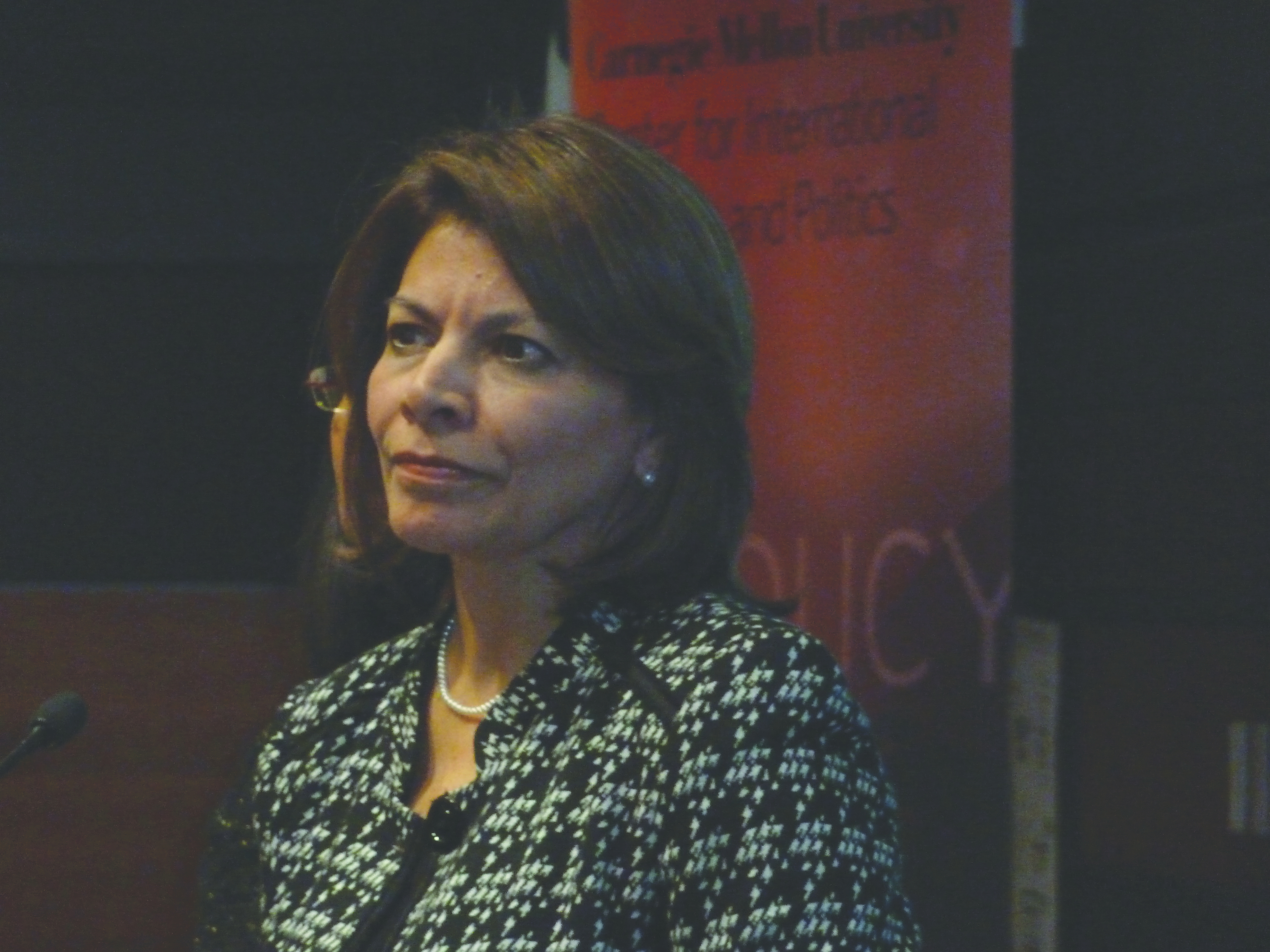 Though Laura Chinchilla, former president of Costa Rica, has spent fourteen years in public office and only one year as a fellow at Georgetown University, the tone struck in her talk on Wednesday, Nov. 1, was decidedly more professorial than political. This event, sponsored by the Center for International Relations and Politics, the Office of Government Relations, and the Department of Modern Languages, explored Chinchilla’s hopes for the future of Latin America in the face of what she sees as the encroaching threat of populism.

The Rashid Auditorium was packed to the brim with faculty, students, trustees, and visiting business, foundation, and nonprofit leaders by the time Kiron Skinner, Director of the Center for International Relations and Politics, the Institute for Politics and Strategy, and the Institute for Strategic Analysis gave her introduction to Interim President Farnam Jahanian, interim president of Carnegie Mellon University, who kicked off the event by explaining the place of the policy forum on campus, finding that “the Center for International Relations and Politics integrates international relations and politics into intellectual conversations at Carnegie Mellon.”

For this purpose, Dr. Jahanian introduced former President Laura Chinchilla, reminding audiences that she was the first female president of Costa Rica and the fifth woman to be elected to lead Latin America in the past forty years before quipping that impressed audiences “can clap, if you want, by the way.”

Chinchilla started by bringing up that, though Latin America is often on the backburner of American Foreign policy, its social and political situation affects the U.S. in a way that few other regions do. “Trade, immigration, and drug trafficking are three of the more important domestic policy challenges that the United States faces today. And to succeed in all of them, it will require the action and cooperation of all of Latin America,” emphasized Chinchilla.

She finds that this inattention to Latin America is where “precisely, lies the importance of academia in organizing events like this one to highlight priorities and redress long due policies within the public administration.” She echoed Dr. Jahanian’s point that events like these are necessary to reevaluate priorities in stating that “if academia continues to care about the relationship with Latin America, the government will not be able to ignore that call.”

In her analysis of the current political and economic situation of Latin America, she diagnosed the frequent fluctuations of Latin American economies as the reason for the lack of sustainable growth, stating that “the variation in the economic cycle that has characterized our nations has also affected our social indicators.” She specifically brought up the example of Venezuela, noting that it had moved from being one of the largest economies in the world to a country in economic collapse, experiencing a humanitarian crisis. “Instead of devising new ways to expand democracies, some governments have come up with new ways to undermine it. Corruption, for example.” This is an issue that hits close to home for Chinchilla, as the New York Times cited anger about “unemployment, crime, and corruption scandals” as part of the reason she left office with one of the lowest approval ratings of any Latin American leader.

Her talk was titled “Hope in Times of Populism,” so the bleak opening that cited the “strong sense of wasted opportunity” which she felt was unique to the region was surprising for many in the audience. After outlining the problem, she quickly assured that she “would like to take a kind of different approach today. I am a very strong critic of my own region because also I understand that criticism is very important to try to move everybody ahead.”

The “hope in times of populism” which the title of her talk referenced was that Latin America was poised to combat what she saw as the problem that “the benefits of free trade, democracy, and globalization have been called into question.” She felt that “deepening democratic reforms,” by strengthening commercial ties with the rest of the world, attempting to create a robust middle class, and “advocating for a peaceful resolution to international conflict,” which she felt was a particular strength of the region, could not only stabilize Latin America socially and economically but could serve to combat anti-globalist sentiment.

She views this anti-globalist sentiment as inherently detrimental to democracy regardless of the ideological foundations, stating “it doesn’t matter if it is from the left or from the right, populism itself is something really terrible for a democracy because it does not have any kind of ideology,” when asked about left-wing populist movements in the U.S.

The points Chinchilla made in her talk strongly reflected her agenda during her tenure as president. In office, she reduced crime rates and combated the corruption that she so derided in her talk. She cited education as a means to avert populism, and it was under presidency that the Costa Rican constitution was amended to mandate that eight percent of the government’s money be spent on education.

Her experience also led her to warn the audience against viewing the shift from autocracy to democracy as a permanent one. The work she has done after her presidency, such as leading Electoral Observation Missions for the Organization of American States in the U.S. and Mexico, demonstrates her commitment to reinforcing the norms of international liberal democracy in political and academic spaces.