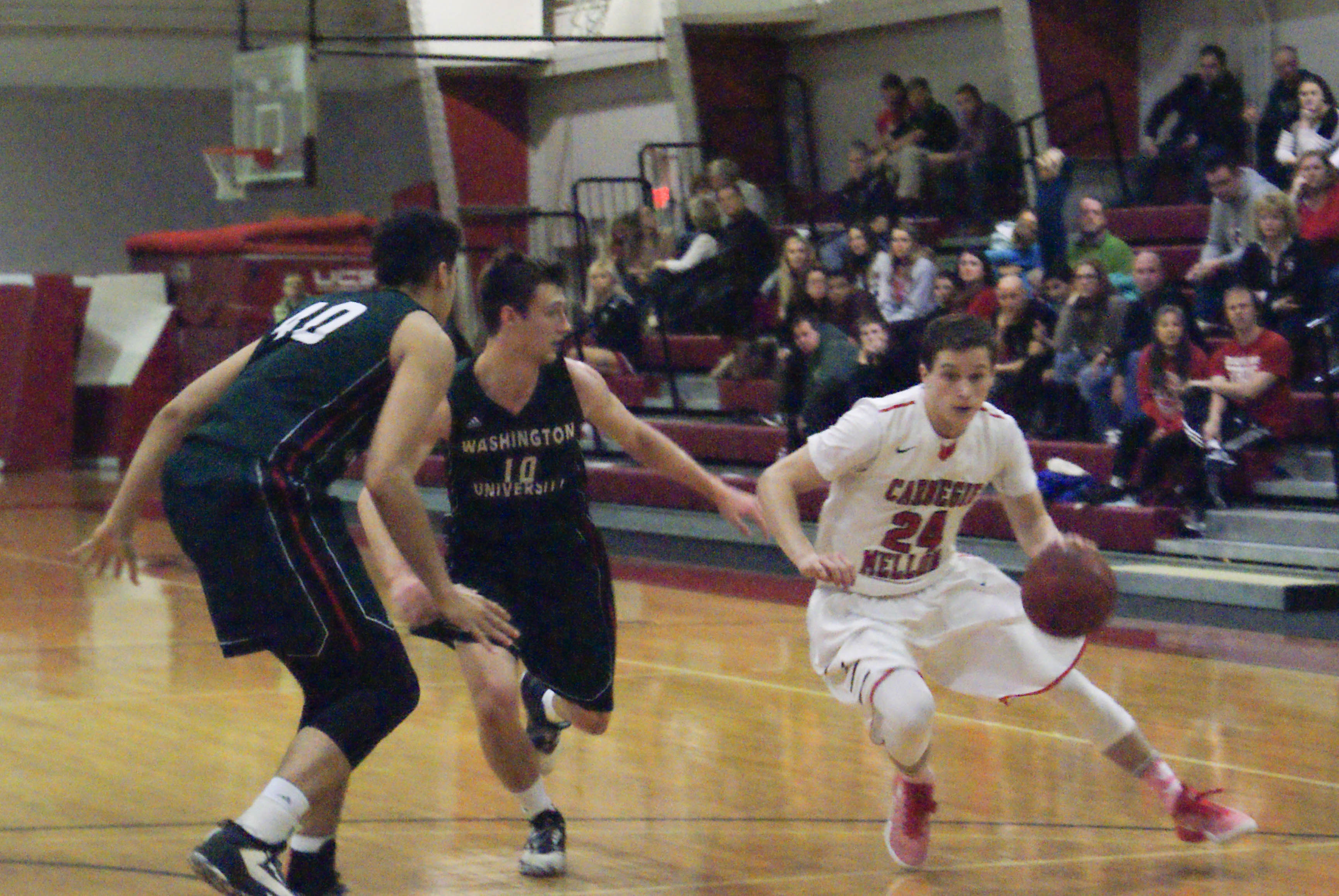 First-year guard Colin McNeil rushes to the basket despite the ultimate defeat against the visiting Bears. (credit: Comic Editor)

The Carnegie Mellon men’s basketball team returned home to face Washington University in St. Louis on Friday. The Tartans fell to the Bears 70–47, bringing the Tartans’ overall record to 9–8 and their University Athletic Association (UAA) record to 3–3.

The Bears got the ball from the opening tip-off, but it was the Tartans who struck first, scoring seven unanswered points before the Bears finally made their first shot to make it 7–2. After a second three-pointer for the Tartans and a pair of Tartan fouls that resulted in two points for the visitors, the Bears capitalized off a turnover to make a slam dunk to send the message that they weren’t going to give up easily. The Tartans settled into patient defense, keeping Washington from converting opportunities before making another three pointer to extend their lead to 17–6. The Bears continued to take shots but found themselves unable to make many of them before a Tartan foul gave them one more point off a free throw. Scoring for the Bears continued to be limited, with sophomore forward and center Patrick Ehland often interrupting Washington’s scoring opportunities.

Coming out of a timeout, the Tartans rushed to make a three-point field goal, but the clocks malfunctioned, causing the points to be rendered void. The Tartans were still able to get 2 points to go up 21–13 before the game stopped again due to a malfunction in the shot clock. A dropped ball gave the Bears an easy two points, and after a series of turnovers, the Bears made another two points despite protests that senior center Chris Shkil had been pushed down. Another shot for the Tartans and two free throws for the Bears later, the Bears mounted an offensive assault that was stopped by the Tartan defense many times. One free throw and another shot brought the Bears to a 23–21 deficit, and a missed three-pointer allowed the Bears to get downfield where the ninth team foul for the Tartans almost cost the Tartans the lead. A lane violation and a miss allowed the Tartans to escape, but the failure to get points on offense gave the Bears another chance. The Tartans fouled for the tenth time, and this time the Bears made both attempts to tie the game at 23 apiece. The Tartans made their way back downfield where two fouls allowed the Tartans to take time off the clock and the chance to retake the lead; however, both free throws missed, and the Bears made a buzzer beating three-pointer to take the lead 26–23 going into halftime.

The Bears got the ball to start the second half and got another shot after the ball changed sides twice. Senior forward Jack Serbin brought it back to 28–25, but the Bears quickly made another shot and to extend their lead to five. After a foul against Shkil resulted in one made free throw attempt, the Bears struck again, extending their lead to 32–26 before the Tartans took a timeout to try and stop the game from falling out of their reach. The Tartans began to push forward more aggressively, drawing another foul that resulted in two points. The Tartans were able to knock the ball out on the Bears’ next possession, and eventually forced a jump ball to get it back. Unfortunately, Serbin was unable to get in a two point shot before the shot clock ran out, giving the ball back to Washington. Another foul by the Tartans gave the Bears two more points, extending their lead to 36–28 before another takeaway from the Bears resulted in a further two points. A missed three-pointer by the Tartans was followed by a made three-pointer by the Bears, bringing the score to 41–28.

The Bears pushed forward again to get three points out of a layup and subsequent free throw before making another shot. The Tartans finally answered with another shot to bring the score to 59–39, later adding two more off a layup. Washington made another shot before committing their tenth foul which gave a point to the Tartans. The Bears quickly got down the field to force a foul, resulting in an offensive rebound that led to nothing.

The Tartans tried to quickly get a three-pointer, but they were unable to make it. They were able to get another point out of a Washington foul, and the Tartans later got a quick shot to bring it back to 64–45. Washington made another three-pointer before the Tartans called timeout to substitute all their players. Another three point shot brought the score to 70–45. The Tartans made one more shot before time expired.

The fouls in the first half added up quickly, and once the Bears took the lead, they moved too quickly to relinquish it. Making the most out of opportunities is something the Tartans were able to do early on, but it was the Bears who were able to make enough opportunities to overcome their early inefficiency.

On Sunday, the Tartans rebounded against the University of Chicago, earning an 89–80 victory that brought the team to 10–8 overall and 4 –3 in the UAA.

The Tartans earned the lead quickly and never relinquished it. The Tartans opened the game shooting 10-of-15 from the floor and built a 25–9 lead following a triple by Serbin with 11 minutes to play. The Tartans maintained the double digit lead for the remainder of the half and led 47–32 at the break.

The Tartans opened the second frame with two quick baskets and led 51–32 29 seconds in, but Chicago scored 14 unanswered as the lead shrunk to 51–46 at the 16-minute mark.

A traditional three-point play by Crawford eight minutes later pulled the Maroons to within a basket at 64–62, but the Tartans responded with a 10 straight points to push the lead back to double figures.

During the run, Maha accounted for seven points. Carnegie Mellon never saw its lead drop below eight points the rest of the way.

Carnegie Mellon shot 54.2 percent from the floor while Chicago shot 47.5 percent. It marked the third time this season the Tartans shot above 50 percent, winning all three. The program has won 51 of the last 62 contests when shooting better than 50 percent.

Four Tartans reached double figures in scoring with Serbin leading the way with 22 points. Serbin led all rebounders with 11 boards to record his league leading 11th double-double. Junior guard Ryan Maha poured in 20 points and converted 3-of-4 from behind the arc. Sophomore forward and guard Seth Henry and McNeil each contributed with 12 points. Henry earned his second double-double of the season.

It’s clear that the Tartans took Friday’s loss to heart, turning things around on Sunday. They will need to continue to fight hard entering the final month of play.

The Tartans will next travel to St. Louis for a rematch against the Bears on Friday, Feb. 3.