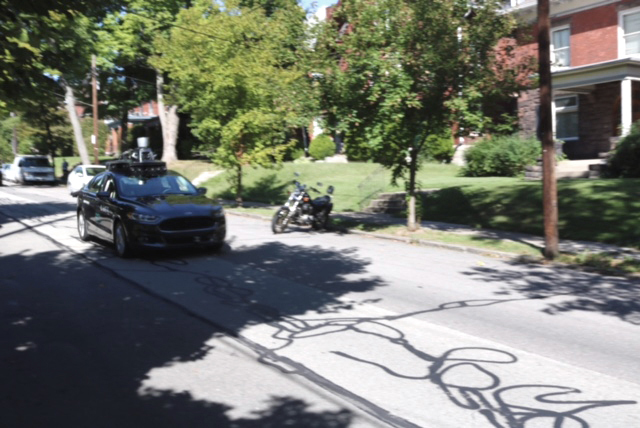 Out of the millions of Uber customers out there, only two can say that they were the first riders in an Uber self-driving car, and it happened here in Pittsburgh.
On Sept. 14, Carnegie Mellon President Subra Suresh and Pittsburgh Mayor Bill Peduto shared a ride in the first official self-driving Uber. They were picked up at City Hall with two Carnegie Mellon alumni, Uber test operations manager Peter Castelli (CIT, Mechanichal Engineering ‘03) and Uber vehicle operator David Power (CFA, Industrial Design ‘16), who made sure the ride went smoothly in the front seat. After driving around Oakland, Suresh and Peduto were dropped off at the University. This marks the company’s unveiling of this technology and their promotion of its accessibility to the public.

Not only is it significant for the University that President Suresh got to represent the school at this technological milestone, but Carnegie Mellon’s role in autonomous vehicle (AV) technology is also what makes this ride so important for the academic community.

“Universities like Carnegie Mellon have the power to change the world. This demonstration is a very good example of that,” Suresh said in a university press release. “This is why innovation is so closely connected to research universities. For several decades, Carnegie Mellon has pioneered the technology behind autonomous vehicles.”

“The college has developed a tremendous body of work during the past 30 years in the area of self-driving technology, and we will continue our efforts in shaping the future of transportation,” dean of the College of Engineering James Garrett said in an interview for the Engineering magazine.

As this field advances, more updates will be added to auto production. For example, parking assistance and adaptive cruise control are now in commercial vehicles.

“Features of automated self-driving cars will appear incrementally and organically, with vehicles eventually driving themselves. This will make the cars affordable and encourage public adoption,” Professor Raj Rajkumar of electrical and computer engineering and the co-director of the GM Collaborative Research Lab at Carnegie Mellon said in an interview for the Engineering Magazine.

Right now, the people of Pittsburgh can experience this technology in a self-driving car through Uber’s pilot program. The ride-sharing company will be inviting its most loyal customers to have the option of being picked up by one of these cars. When requesting an Uber, the rider will get a self-driving Uber, if available, that has a safety driver to make sure the ride goes as planned.

In a press release from Uber about self-driving cars being available in Pittsburgh, the company said that “self-driving Ubers have enormous potential to further [their] mission and improve society: reducing the number of traffic accidents, which today kill 1.3 million people a year; freeing up the 20 percent of space in cities currently used to park the world’s billion plus cars; and cutting congestion, which wastes trillions of hours every year.”

Carnegie Mellon’s College of Engineering website says that predicted that the rise of AV technology will change the world of transportation in the next ten years. Also, it’s expected that during the years 2020-2030, cars will contain a virtual valet that will park cars by using a phone app and traffic jam assistance.
“In the not-so-distant future self-driving cars will provide society with many benefits pertaining to safety and quality of life,” said Rajkumar in an interview for the Engineering Magazine.