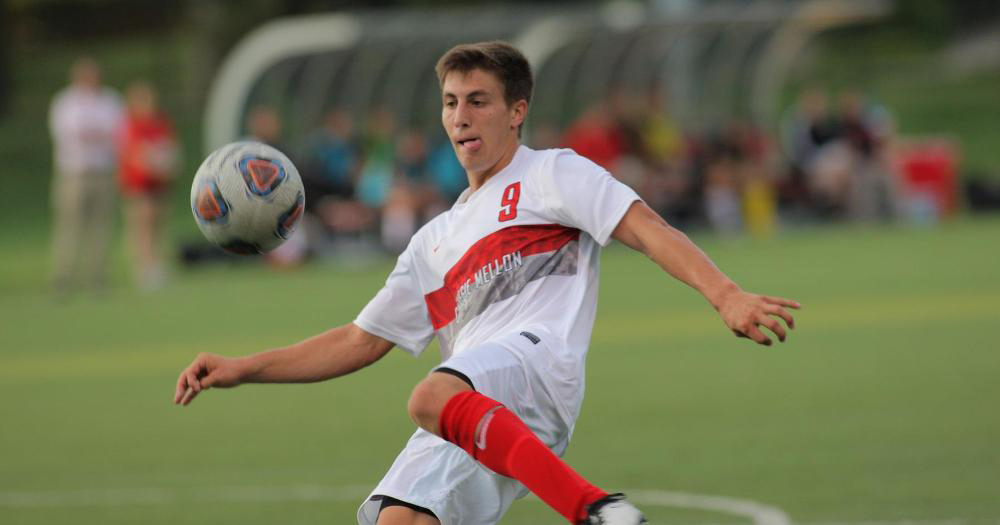 Sophomore midfielder Zack Masciopinto focuses on landing a high kick. He has been a key player this year. (credit: Courtesy of CMU Athletics)

The Carnegie Mellon men’s soccer team took the field at home on Saturday against Frostburg State University in the Carnegie Mellon University DoubleTree Showcase. The Tartans took the match in an exciting 1–0 overtime victory.
The game was an even matchup for most of regulation time, although the Tartans played with a man advantage after the Bobcats were given a red card. This man advantage only lasted fourteen minutes, however, because the Tartans were handed a red card of their own.

The teams spent almost 35 minutes of regulation time with only ten men. Despite the man advantage that the Tartans carried until the red card, they could only find one scoring opportunity when sophomore midfielder Zack Masciopinto headed a shot toward the goal, but it was deflected and ended up wide of the goalpost.

Before the teams had to play with a man out of the game, first-year midfielder Cooper Tubiana tried his hand at getting the Tartans a lead. He made back-to-back shots on goal in the 21st minute, but neither attempt was successful.

The Bobcats found just as much success in scoring as the Tartans did, and only saw a glimmer of hope in the 65th minute when a free kick nearly made it into the Tartan goal but ricocheted off the goalpost instead.

The game remained even at zero goals until there was 49 seconds left to play in overtime. A foul was called against Frostburg, and Carnegie Mellon was given a free kick from 35 yards away from the goal. Sophomore midfielder Philip Petrakian played the kick to the far goalpost, and Tubiana leapt into the air over every other player and headed the ball into the Frostburg goal, ending the game with a 1–0 victory for the Tartans as they gathered on the field in celebration. Sophomore goalkeeper Alec Lam earned his first shutout of the season as well as his second win with three saves on the day.

With this victory, the Tartans improve to 3–0 on the season while the Bobcats fall to 1–3.