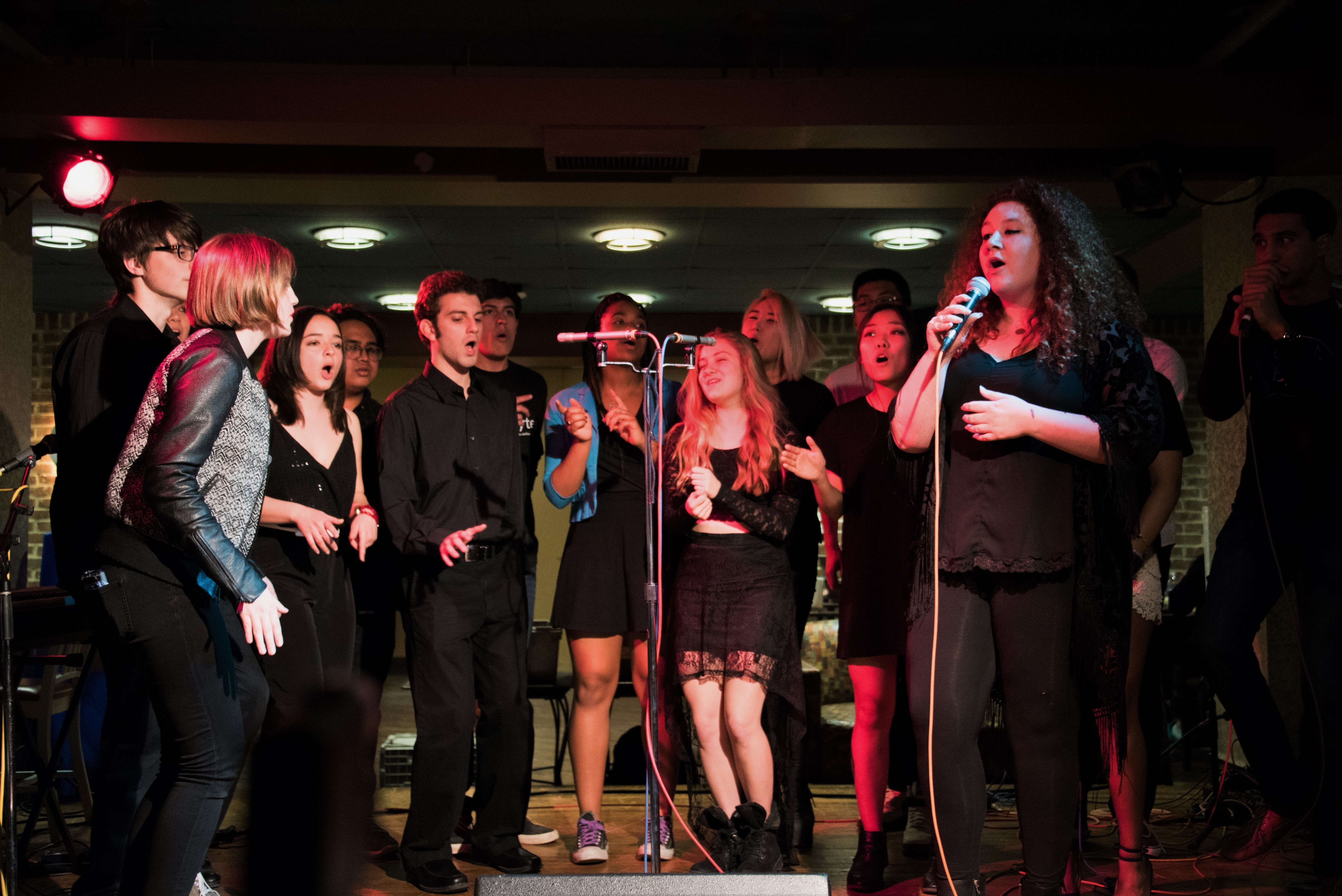 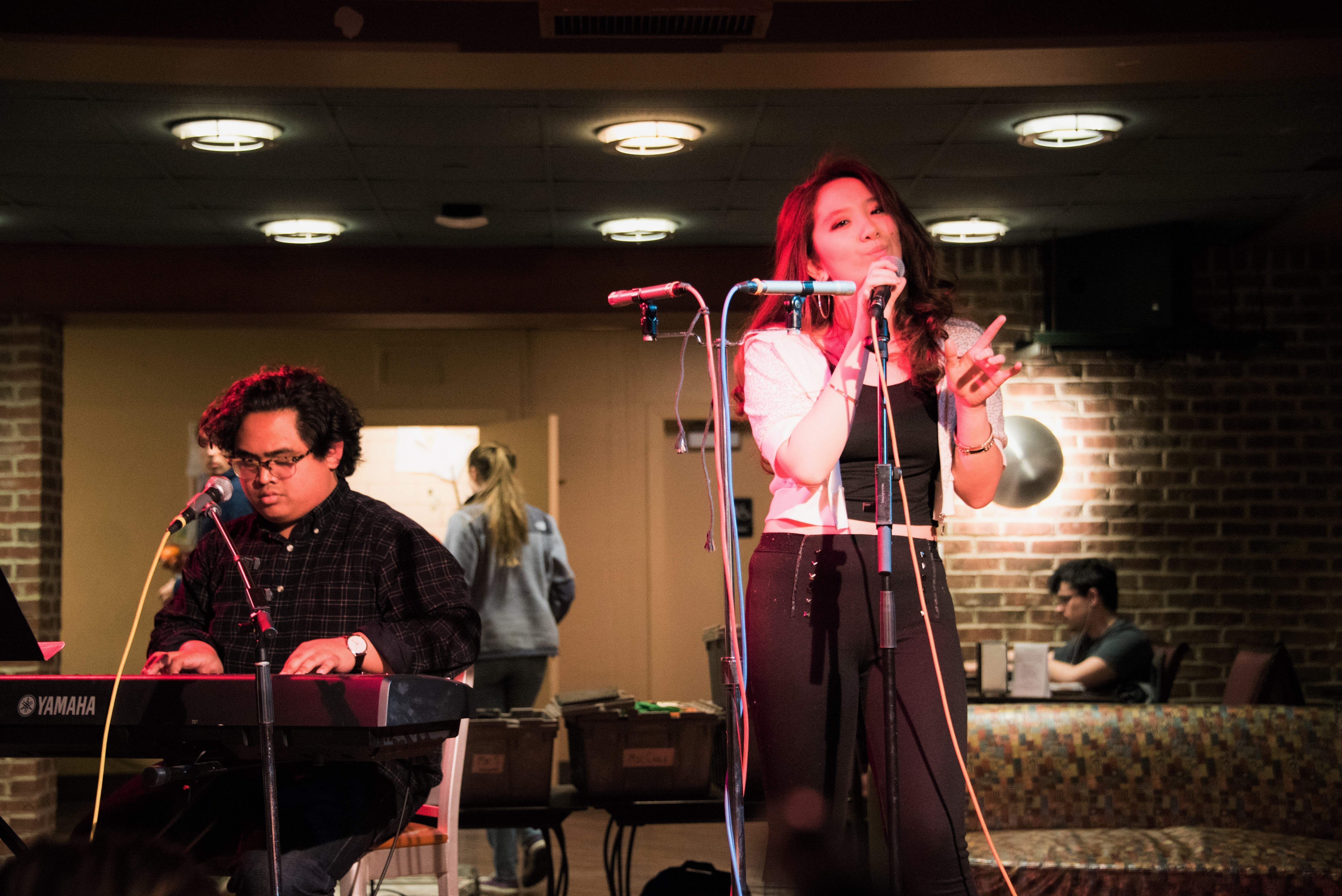 On Wednesday, March 30, the CMU Soundbytes staged a performance in The Underground. This restaurant has such a quaint little cafe quality, with its dim lights, comfy sofas, and its intensely sugared coffee. The little stage in the front of the room was covered with cords and chords and the talented members of this enjoyably upbeat a cappella group. It was a smaller, more intimate performance than you'd typically expect, with fewer group numbers and more duets and solo songs.

This week had been difficult for many reasons, so it was nice to experience such a comfortable, warm space filled with music. The cabaret began with a word from Soundbytes vice president and sophomore science and humanities scholar student, Christina Cabana, who quoted Karl Paulnack, Director of the Music Division of the Library of Congress, who said "Someday at 8 p.m. someone is going to walk into your concert hall and bring you a mind that is confused, a heart that is overwhelmed, a soul that is weary. Whether they go out whole again will depend partly on how well you do your craft." This quote has always stuck with me personally, but in the context of this week, there were a lot of us who needed to be put back together. Music is certainly a lovely glue.

There were several highlights from the night, but the first one to come to mind was sophomore physics major, Paul Rogozenski, who sang Johnny Mathis' "Misty." Cabana introduced him by saying that when he chose the song, "all of the panties in the room dropped," and as the investigative journalist I am, I paid close attention to see if it would happen again. I'll be darned if the second he opened his mouth to sing, there wasn't the noticeably soft "whoosh" of undergarments hitting hardwood. His voice was so melty and delicious and transcendent, and it was a real joy to listen to. He could have just guzzled an entire bottle of honey, and rather than sing, just open his mouth and let it ooze out sensually, and it would have achieved the same effect as his performance.

Halfway through the performance, the group took a 20-minute break to create an impromptu arrangement of the audience-requested song, Sir Mix-a-Lot's "Baby Got Back." After twenty minutes, they reconvened on the stage to prove that baby did in fact have back. It was only a fraction of the group, with Cabana as the soloist, two harmonizing voices, and three percussion boxers, and this group size worked out really well. It was a really nice, light performance that left the audience both happy and at peace with the world and all of the bodacious badonkadonks which inhabit it.

Cabana also sang Fleetwood Mac's "Landslide," accompanied by junior chemical engineering major Johnathan Roppo, on the guitar. In contrast with some of the other performances, this one melded seamlessly. Roppo and Cabana's voices were very well suited to each other, and particularly for this song. Cabana's first song, Adele's "Can't Let Go," utilized a higher register than "Landslide," and during the entire Adele performance, I was wishing that Cabana had settled into her lower register more. "Landslide" granted that wish, and it was so pleasant. My notes for this performance were "omg her voice is gorgeous, and wow their harmony is fantastic, I'm actually peeing, yes."

Perhaps my favorite Soundbytes soloist was freshman art major Toby Donoghue, with Adele's "Remedy." Christina introduced Toby by saying that "we always do fun facts at auditions because we have to weed out all the weird people mirthful laughter. Her fun fact was that she is half mermaid, but it should have also been that she is half Adele." Toby has such a casual way of singing that doesn't match the transcendent angel chorus that is her voice. She makes it seem so easy, but I'm sure that if half of the audience tried to sing in the same way, we'd sound like tortured goat people rather than an angel chorus. In my notes, I have recorded that when she sang the line "When the pain cuts you deep," my reaction was "omg I'm crying what is this life."

Overall, it was a lovely night. There were a few lyrical slip-ups, where one of the soloists sang something to the tune of "words words, there are more words here," and another just kinda mumbled a bit until he got it back, but these just added to the cute, casual atmosphere. The audience was there to enjoy, not to judge or to rebuke; it was a lovely night full of music and good feelings and delicious, melty, panty-dropping voices.