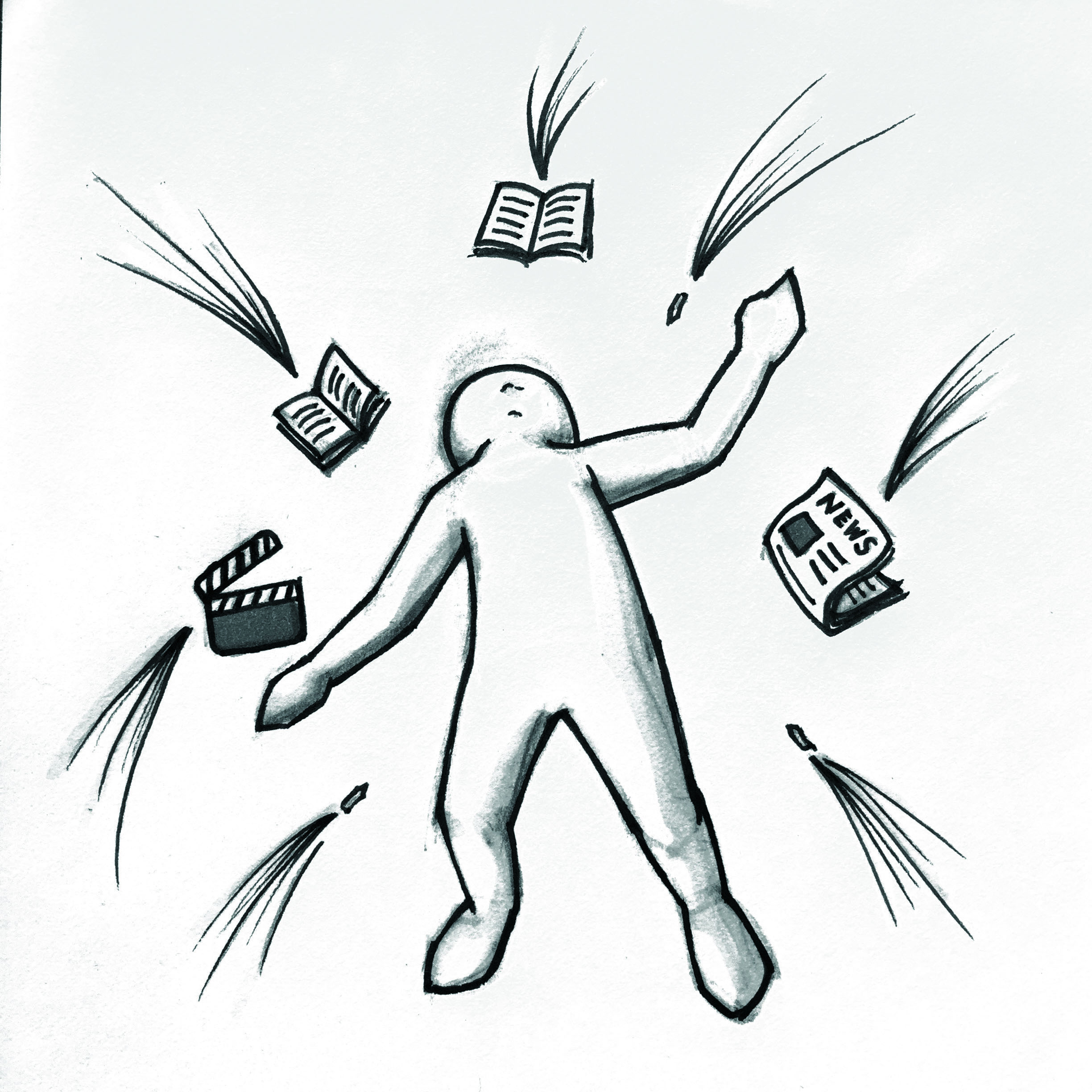 There has been a lot of discussion about stress culture, mental health, and social support at CMU, and it is clear that people aren’t really sure what the best way to move forward is. Not even considering the issue of limited funding for mental health, there are so many factors in what it takes to create a mentally healthy environment and it would require a lot to move the discussion outside of hashtags and figure out how we can do better.

This is simply because mental health is a complicated topic, there are so many factors that could benefit from intervention. Arguably no mental health debate has gotten more attention that the question of trigger warnings. Restructuring this discussion to focus on the ways we can provide additional support on campus and with the media we consume will allow us to create a more accessible and safe environment for individuals with mental illnesses.
Despite the fact that the conversation about trigger warnings and mental health has successfully left the utopia of social media blogging platforms and entered discussion on college campuses, the discussion has become so polarizing that it is no longer moving in a productive way.

Without a solid understanding of what people that are suffering from trauma, anxiety, depression, and the huge range of disorders that are vulnerable to triggers actually need from their environment, the conversation has turned into a question of censorship, what people find uncomfortable, and a one size fits all accommodation for mental illnesses.

A look into the history of trigger warnings does not tell us much. The thing about the word “trigger” and the definition we now associate with it is that, well, it’s not clear where it comes from. Looking at academic papers in psychiatric and clinical journals, the term trigger doesn’t hold the same specific meaning; it is largely just used as verb to describe a cause-and-effect of a disorder. Papers in The American Journal of Psychiatry use the word trigger to describe what causes a disorder, such as a study on whether physical illness triggers body dysmorphic disorders.

It appears to have first emerged through feminist journals and social media to describe a common experience of mental illness, and it garnered enough popular opinion to stick around. With the support of extremely liberal students, vaguely therapeutic speech has worked its way into our culture as a clinical buzzword.

Changing mental health care based on experiential accounts rather than research is not new, or really the main issue behind trigger warnings. Therapy and psychiatry rely on the development of language to break down problematic neural associations that underlie a number of mental disorders and help their patients bring symptoms under control.

So, naturally, there is a parallel development in language growth of the therapeutic and pop cultural. In fact, Post Traumatic Stress Disorder (PTSD) was first included in the third Diagnostic and Statistical Manual of mental disorders (DSM-III) as a result of veterans returning home from Vietnam, and this diagnosis initially faced a lot of skepticism and controversy. What a trigger means colloquially is a stimuli that sets off destructive symptoms of a disorder, usually relating to trauma, phobias, or self harm.

Any sort of label or diagnosis or buzzword serves the function of simply communicating a specific idea in a way that allows us to explain our experiences more specifically. The lack of language to talk about illness is a challenge for most people dealing with mental health problems. I would be hesitant, therefore, to dismiss both the significance of the term as well as its origins.

One of the other arguments against the implementation of trigger warnings is the idea that the real world does not come with trigger warnings, so we should not be teaching students to avoid their problems.

This is a statement that needs to be unpacked and, to some extent, debunked. It is clear that the immediate need to dismiss the idea of trigger warnings is directed at its origins. Those involved in feminist, racial, and queer discourse are more likely to promote the use of trigger warnings, and the need to lump triggers in with political correctness and censorship is frankly callous. It is not “coddling” or unreasonable to expect a college environment to prevent students from reaching a state of psychological distress that they pose a danger to themselves or their well-being.

On the other hand, the response to such accusations ends up in such a state of defensiveness that there is not enough attention given to the practical issues of implementation. The prevalent idea behind trigger warnings is a starting point, not a final solution to changing the environment on college campuses to foster better mental health. For either side, it would be valuable to look into clinical strategies and the etiology of the myriad of mental illnesses that trigger warnings are intended to help.

Exposure therapy is used mainly to treat phobias, and this is what the classic arguments against trigger warnings seem to be drawing from. The idea behind exposure is that to deal with the triggering stimuli, you have to face it and learn to cope with the negative reaction. Over time, the association formed will become weaker and the stimuli stops being triggering.

As much as learning to cope with immense psychological and physiological reactions is the foundation of most treatments, it is not simply advise to just deal with being upset. Patients learn to face their triggers in a clinical, safe environment using a combination of skills from talk therapy, progressive muscle relaxation, mindfulness, distress tolerance, and the wide range of specific treatment plans to an individual’s disorder and mental state.
Trigger warnings intend to give power back to an individual to take control of their own recovery and what they are capable of dealing with on a day to day basis.
That is the idea behind it, anyway. But it is also where the proposed solution falls short. On social media, designing your own utopian space is the point.
But the reality is that colleges do not have the resources to accommodate everyone’s trigger in the form of a trigger warning, and therapists do not generally support the strategy of avoiding triggers in real life.

The reason for this is that anything can be a trigger. Yet not labeling everything with a trigger warning implies a hierarchy of legitimacy in disorders, and that is counter productive.

And it is not realistic to expect trigger-warning labels for literally everything, for obvious reasons. Sexual assault and suicide trigger warnings are thoughtful, but they do not consider the fact that triggers are generally random associations — a location, an object, a name, a sound — with a traumatic event or the fight-or-flight response. Furthermore, not everyone knows what will be triggering.

So it is more helpful to have a plan to help if something triggering comes up rather than struggling to keep classes and media trigger free. The second part of a clinical exposure is learning to apply distress tolerance and coping skills. Developing a safety plan is a part of trauma treatment, and there are modifications that can be designed for a wide variety of disorders. This is great because it gives an individual skills to try to cope with a trigger, which means that facing the world is a more achievable task.

A campus-wide safety plan, therefore, would appear to be the best solution for the exposure to a trigger. Giving students the ability to opt out of a lecture is important, but the follow up care is by far more important. Leaving class because of triggering subject matter can increase the stress of the situation, putting the spotlight on the student without actually starting a conversation . In some ways it is another way of letting our campus community not take responsibility for our collective mental health.

If a student is triggered in class, given a warning or not, what support structures do we have in place to help them? This is about day-to-day challenges, so there should be an easily accessible professional to turn to or a space to work through a safety plan.

CaPS and the Mindfulness Room are both good first steps to providing that support, but they are both difficult spaces to enter. There are small changes, like having counsellors that can be reached immediately rather than the two week appointment or comfortable lounges where students can decompress, working with skills they have learnt in therapy.

Moving towards these kind of questions, trying out different solutions and working through problems in existing systems, is a better discussion to be having because it allows to account for the complexity of mental health.

Mental health care is not a one and done deal, it requires the community and professionals to work together to provide support.