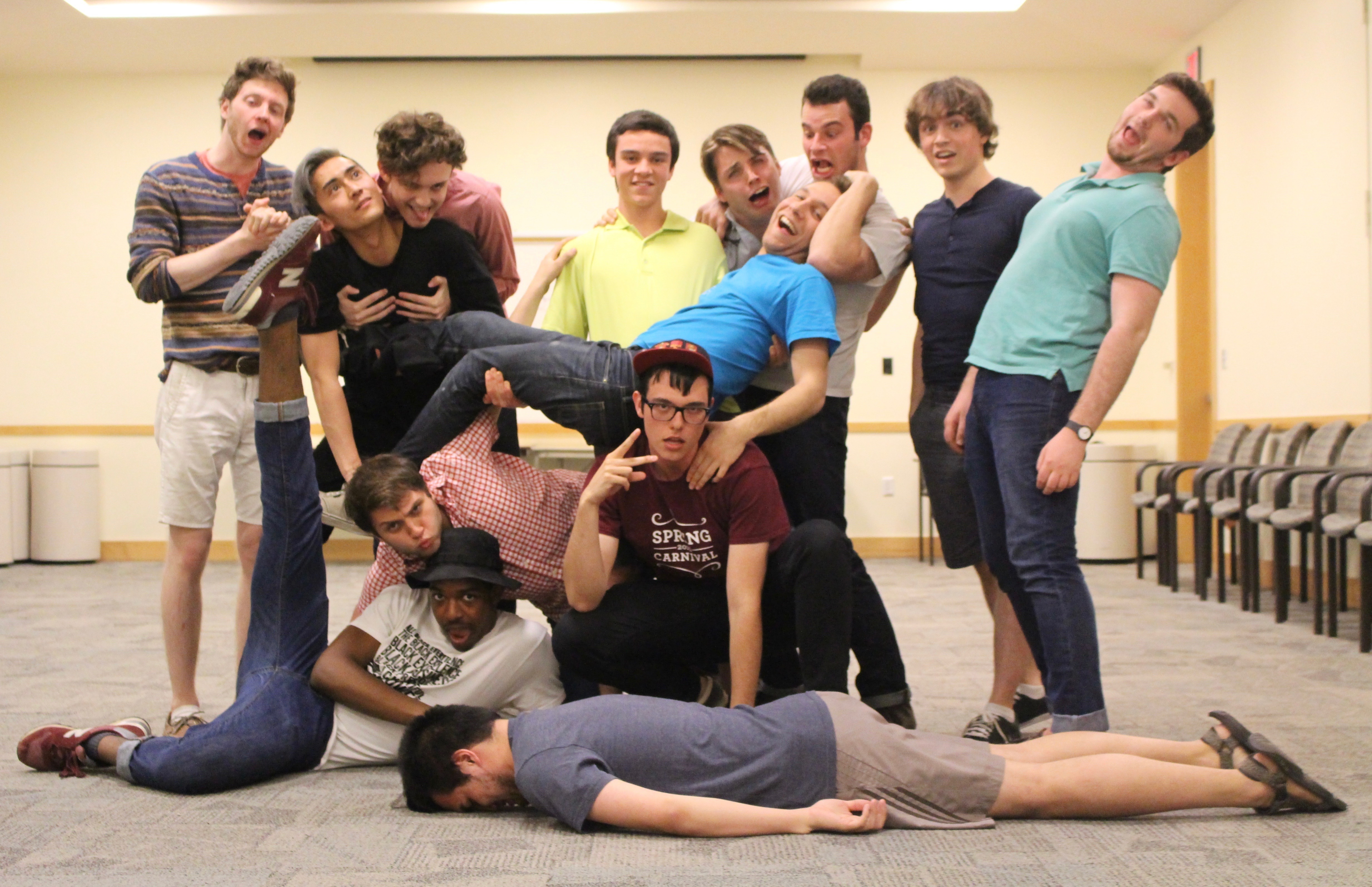 As the clock on my phone creeped towards 9:30 p.m., the 13 members of The Originals’ team trickled into Peter-Wright-McKenna. The guys jumped around, humming to themselves and catching up with each other until their Artistic Director, senior electrical and computer engineering major Nitsan Shai, walked over to stand towards the middle of the floor.

Like clockwork, the rest of the guys, still chatty, began to form a circle around where Shai stood, with first-year business administration major, president, and choreographer of The Originals, Leopoldo Galvan, signaling them to quiet down. As chatting turned to murmuring, which turned to hushed whispers, all the members turned their attention towards Shai, who took their quieting down as a signal to begin practice for the day, saying, “Okay guys, let’s sing.”

Earlier this month, The Originals won the semi-finals for the Central Region Division at the University of Buffalo Center for the Arts, a category that includes 38 groups from Ohio, upstate New York, Western Pennsylvania, and parts of Canada. Now they’ll be heading off to the Beacon Theatre in New York City for the International Championship of Collegiate A Cappella (ICCA) finals.

“It’s such an honor to be selected for the finals,” Galvan said.

“Until this happened, this was literally somewhat of a dream for us,” said Originals member, choreographer, and senior industrial design major Gene Hua. “My freshman year was the first time that we made the semi-finals, and even that was crazy.”

As The Originals, or The O’s as they commonly say, get ready to attend the ICCA finals, their usual nine hours of practice a week are being pushed towards perfecting everything from vocals and choreography to synchronization and expressions. Leading up to the competition, each member has easily put in at least 100 hours of time working on their vocals — both on their own, and with the group. Occasionally the group goes through what they call marathon weekends, where they put around 10 hours into fine-tuning their arrangement in a single weekend.

“One weekend, thanks to Senate funding, we were able to travel to SoJam in Atlanta, where we saw tons of groups that we admire perform,” Galvan said. It was through their trip to SoJam that the O’s were not only able to see Lark, an incredible all-female a cappella group from Colorado University at Denver, perform, but were also able to meet their coach Erin Hackel.

“One thing that we’ve definitely done more of this year, which has helped us improve a lot, is taking feedback from other people, and Erin was a huge help in that respect, as were our friends and just people from different backgrounds,” said senior BXA mathematics and music technology major Erik Fredriksen, who works on arrangements for the group. “We’ve tried to keep our sets secret in the past, but we’ve realized that more than having a great reveal, it helps to have as many eyes on an arrangement as possible.”

Last Tuesday, I had the opportunity to be one of these eyes, and learn about some of the things that make The Originals the outstanding group that they are.

On Attire:
Dressing up is a pretty important part of any a cappella group, and The Originals have had a long and evolving relationship with a dark color palette and the mixing and matching of style techniques. The Original uniform per se, back in 1996 when the group was conceived, was a suit jacket, vest, and slacks with a plain shirt of any color. Over time, this changed to become a white shirt, blue jeans, black shoes, and a 3” wide “clown tie,” as Shai described it. In 2014, the black shirts came in, both the ties and the jeans got slimmer, and the color palette of dark blue and black was strongly established. “It’s a sexier look,” Shai laughed.

This year the team is striving to embody a theme of innovation, and is letting the outfits bring out the individuality that each member brings to the table, while still adhering to a color scheme that brings coherence to the look. “We let people experiment more with what they’re wearing, so that they’re comfortable on stage, and just give them suggestions at practice,” Shai said. “There are always, however, like two guys in blue ties, as a sort of homage to the original Originals.”

On Preparing Arrangements:
While Shai and Fredrikson are mostly responsible for putting the actual notes for arrangements down on the page, The O’s follow a very holistic method while putting sets together.

Around October and November, members have plenty of opportunities to submit songs, which are discussed as a group. The O’s collectively decide on what they like, don’t like, and slowly eliminate songs until they find songs that work well together, that have some individual uniqueness or flavor, and that everyone enjoys.
“People won’t sound good if they don’t love what they’re singing,” Fredrikson said, “so we make sure that the set makes sense and that every member can get into it.” Once the songs are picked, Shai and Fredrikson meet with one another to pen down notes and host open sessions where any member can come and provide suggestions and contribute to the process. The aim of Shai and Fredrikson, in terms of putting these sets together, is to bring a pop appeal to their arrangement, while staying true to both the artists’ and their own artistic integrity. The end result in this case is a three-song masterpiece.

The set that The Originals have been working with for the ICCAs begins with a jazzy and infectiously enjoyable rendition of Nick Jonas’ “Levels.” The next song in the sequence is Lorde’s “Everybody Wants to Rule the World,” which alters the lively atmosphere to a much creepier, post-apocalyptic one. Finally, with the mood mellowed out, The O’s end with Demi Lovato’s soulful “Stone Cold,” for which first-year musical theatre major Ramsey Pack took home the award for Outstanding Soloist at the Central Quarterfinals and the Central Semifinals.

“The sign of a great arrangement is when you can practice it for dozens of hours and still not get sick of it, and I’m still not sick of ours,” Hua said, with his fellow members smiling and nodding in agreement.

On Choreography and Coherence:
If you went to Almost Midnight A Cappella last semester, then you’ll definitely remember the O’s performing Vampire Weekends’ “I Think Ur a Contra” and the very intricate choreography that they brought to the event. Well, turns out that was one of their least choreographed performances of the year.
“It was very experimental,” Galvan chuckled, “Basically the choreography was that there was no choreography except that when you’re singing you step and when you’re not you stay still.” Since then, both Galvan and Hua have worked hard to keep the energy from experimental performances such as that, but to have a set choreography established so that the singers can focus on their voices.

“We listen to these songs hundreds of times and try to figure out what we want to do with it, like with “Everybody Wants to Rule the World” we have Gene largely separated from the group, with the rest of the guys acting like his evil minions or something, just to bring out that dystopian vibe,” said Galvan.

The coherence that arose out of such a performance comes a lot from the familiarity the guys have with one another and hours and hours of practice. During practice, Galvan steps out of the group and watches the rest of the members perform, stopping them and readjusting wherever he sees an error, so that the final result is polished, coordinated, and smooth.

On What’s Coming:
The Originals are planning to host a fall concert inviting a cappella groups that inspire them from outside Pittsburgh to come and perform in Rangos Ballroom on November 11. This will be the first time that such an event will occur on such a grand scale at Carnegie Mellon. With The Nor’easters (2013 ICCA winners) and Voices in Your Head (2015 ICCA Runners up) already confirmed, and more groups to come, this is definitely a show you don’t want to miss.

“We’ve got new stuff coming out soon too,” Galvan hinted, so keep your eyes peeled.