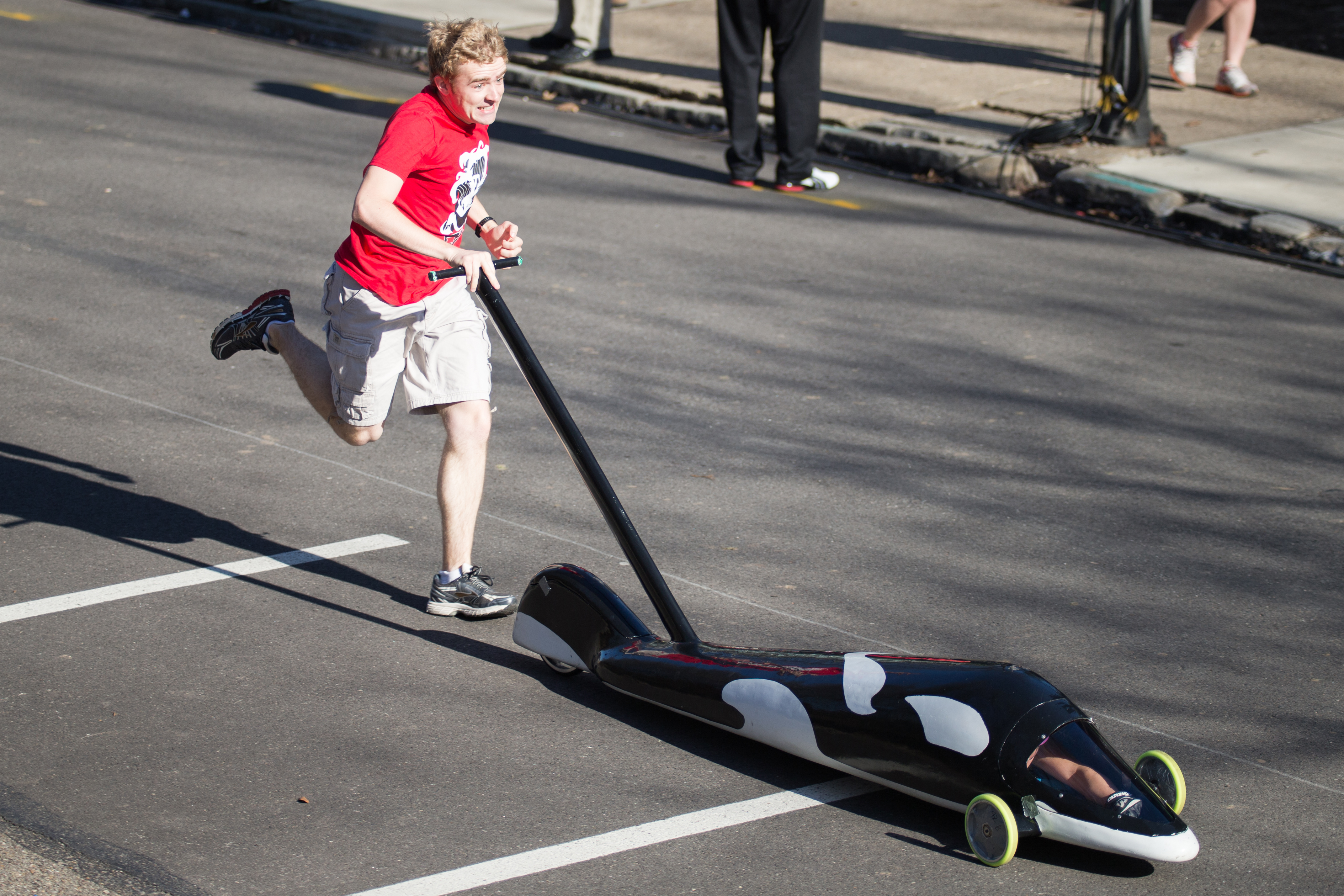 A pusher propels his team's buggy through the race course while his teammate steers from inside the vehicle. (credit: Brandon Hong/Photo Editor)

Last Friday and Saturday, organizations from all over the Carnegie Mellon campus competed in Sweepstakes, better known as Buggy, in which teams construct a pushable vehicle called a buggy and then race these buggies on the roads near campus. The buggies have one passenger and are propelled by a person who pushes the vehicle from the rear. This yearly competition is always a highlight of Carnegie Mellon's Spring Carnival.

The Buggy prelims did more than just get things rolling in the competition, as perfect weather conditions saw incredible performances in the qualifying round. Student Dormitory Council’s (SDC) men’s A team highlighted the round with a record shattering 2:02.499, over two seconds faster than the previous mark.

SDC had huge success on the day, winning qualifiers with both the top women’s team and the top men’s team. SDC also crowded the finals field with their teams, sending both the women’s and men’s A, B, and C teams to the finals. With six teams in the finals, including the top two, this was arguably one of the most successful days for a single buggy program in history.

The other teams making the finals from the women’s side were CIA, Fringe, SPIRIT, and Fish. On the men’s side CIA, SPIRIT, Fringe, and Sig Ep were the other squads to make a run to the next round.

The day started off bright and early, with Robo-buggy opening up competition with a somewhat speedy run, putting together a 3:33 performance, which was about 20 seconds off the mark from last year. After the robotic exhibition, it was time to get to the women’s side of things.

The very first race showed a huge jump in competitiveness from last year on the women’s side, with SDC’s C team battling CIA’s B team in a near photo finish race that seemed to be a battle of two clear cut finalist teams. CIA looked to have a 5-second lead going into the hill, but a late surge by the SDC squad brought things down to the wire. With both buggies finishing in 2:47, where finalists from last year often couldn't even break three minutes, it looked like the early successes would send both teams on to victory.

By the end of the women’s prelims, it was clear that racing under the 3-minute barrier wasn't enough this year. SDC C and CIA B squeaked by, taking the last 2 spots in the final with their 2:47 results, as Apex’s A team came up short with a 2:49.

The race of the day on the women’s side came, unsurprisingly, from the SDC women. The A team wrapped up day one competition in the 8th heat with CIA A team’s 2:34 as the time to beat.

The women blasted out from the start, opening ahead, and never coming close to losing their lead. Most closely pursued by Apex’s A team, the SDC women already led by about 15 seconds over their nearby rivals going up the hill. The team built on the lead, and challenged for their previous record time with a 2:26 finish, coming up about a second short. The SDC A team, however, was disqualified since they didn't have their hands on the handles when crossing the finish line, making the CIA A team the winners.

The men’s side saw speed to compare, with the slowest 2016 team to qualify, Apex A, finishing in 2:21, 10 seconds faster than the 2:31 it took to make the final round a year ago. With tight competition through the day, just like the on the women’s side, the best was saved for last, with SDC’s A team prepared to make a seemingly annual run at the record books.

With football star Brian Khoury’s opening push, SDC exploded to the lead, blowing away the competition in their heat in similar fashion to their female counterparts a couple hours before. A clean roll down the hill gave SDC an uncontested run up Frew Street with each of their pushers sprinting behind a flying buggy. The efforts were rewarded, as SDC smashed their previous course record and brought about some talk of an attempt at the 2-minute barrier in the future.

The finals saw more domination from SDC. The men’s SDC team A took first place overall in the competition with CIA A coming in a close second. Fringe A and Spirit A took third and fourth respectively. With such an overwhelming performance as this one, SDC will no doubt be the favorites yet again coming into next year’s event.

The weather wasn’t the only factor in arguably the fastest buggy-racing days in the history of the sport. Great weather throughout the late winter and spring opened up a window for significantly more practice for all of the buggy teams than last year. This storied Carnegie Mellon tradition continues to thrive and improve on itself every year. Buggy races will undoubtedly be a central event at Spring Carnival for years to come.