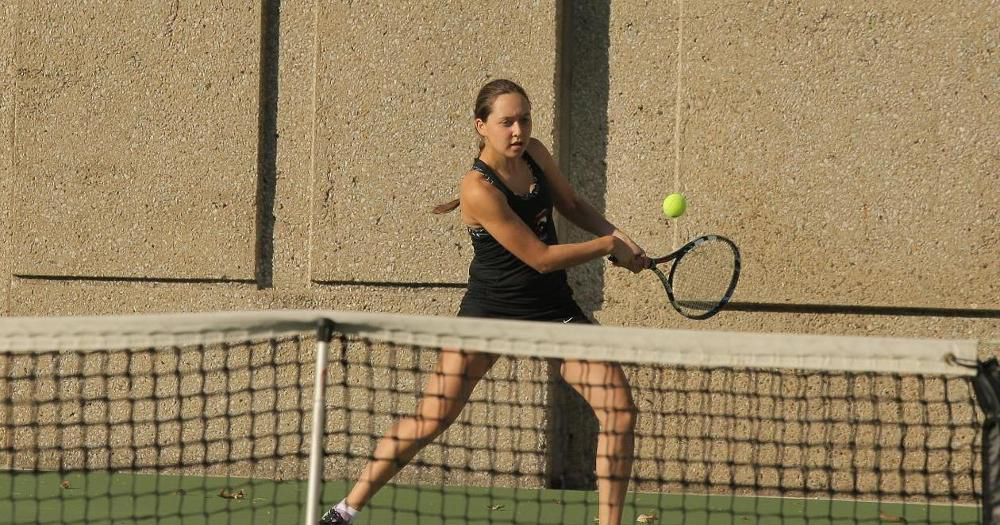 First-year Jamie Vizelman concentrates on returning a volley in a match against Washington and Lee University. (credit: Courtesy of CMU Athletics)

The Carnegie Mellon women’s tennis team faced off against the defending President’s Athletic Conference (PAC) champions Westminster College on Monday. The Tartans dominated the Titans in a convincing 9–0 victory.

The duo of senior Brooke Tsu and first-year Marina Selenica started the day with an 8–0 win in second doubles. Junior Margaret Anne Smith and sophomore Katie Lai also won 8–0, scoring the second point for the Tartans in third doubles. Sophomore Cori Sidell and first-year Minami Makino closed out doubles play, taking first doubles 8–2 to give the Tartans a comfortable 3–0 lead.

The Tartans took the court at home on Saturday to face off against 13th-ranked Washington and Lee University. The 11th-ranked Tartans defended their position in the standings against the Generals in a close set of matches that came down to the final round of singles play. The Tartans were victorious with a score of 5–4.

Doubles began with the Generals coming out ahead, but the pair of Tsu and first-year Jamie Vizelman quickly answered with a point of their own in second doubles, winning the match 8–4. The Tartans then took control of the lead as the tandem of Hamstra and junior Nicholle Torres finished third doubles with a close 8–6 win to end doubles play.

Makino started off singles play by scoring a point for the Tartans in the fifth position, winning 6–3, 6–4. This put the Tartans up 3–1, but first, second, and sixth singles were all heading into a third set, and the Generals were ahead on the other two courts.

Carnegie Mellon still had to put up a fight before they could take home the victory, but the Generals found wins in first and third singles to tie the match at 3–3.

However, Torres came in with a comeback win in second singles to give the Tartans another lead, winning 2–6, 6–2, 7–5.
The Generals quickly answered and re-tied the match at 4–4 in sixth singles. Vizelman was the clutch player of the night though, and she took fourth singles in an intense match by forcing a third set and winning a tiebreaker, 4–6, 7–6 (7–5), 7–6 (7–5).

The Tartans are now 11–5 in the season, and will next take on Washington College at home on Friday, April 1 at 4 p.m to continue their run.