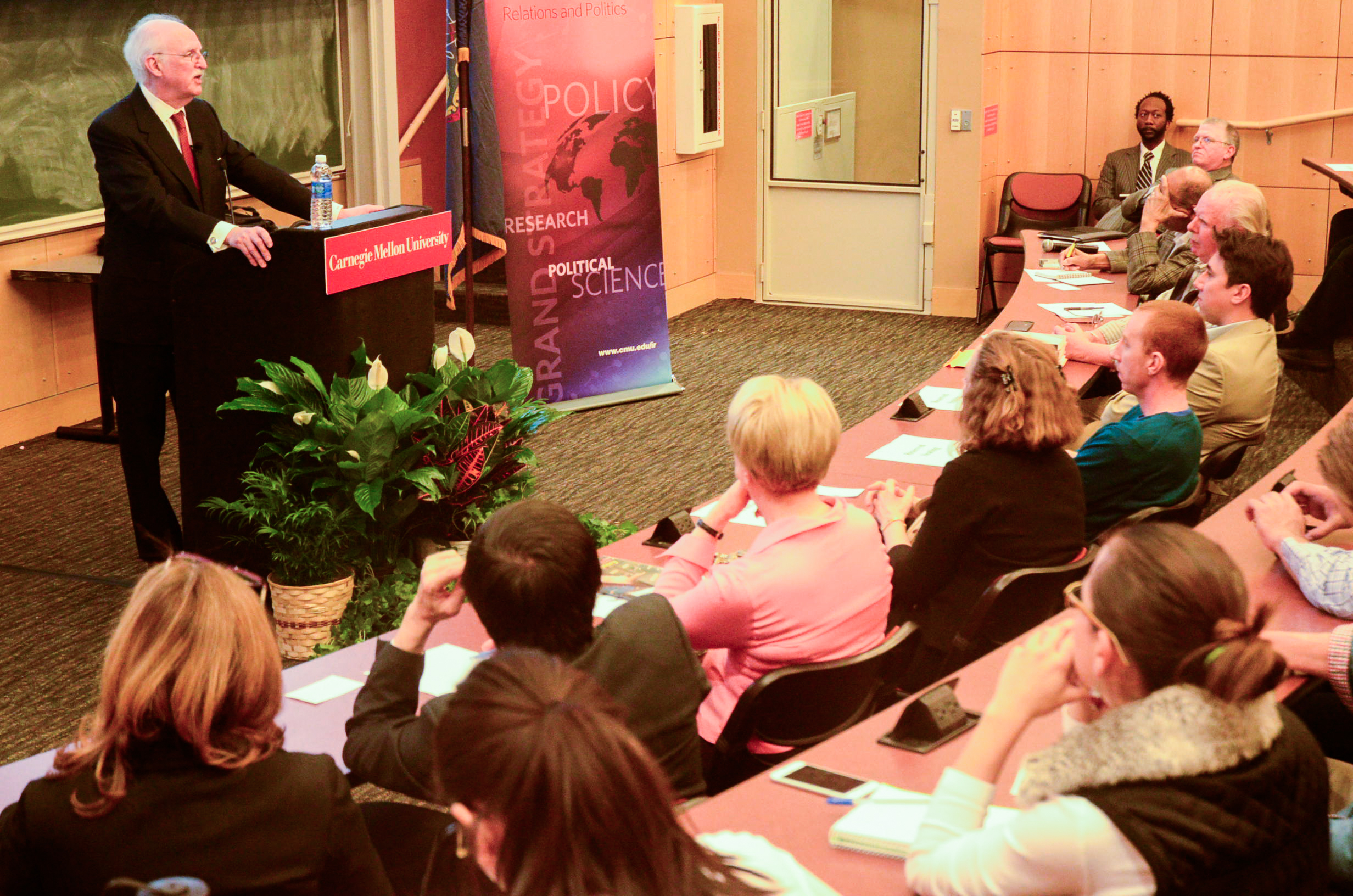 On Wednesday, March 23, an impressive number of people assembled in the Giant Eagle auditorium in Baker Hall for Judge Douglas H. Ginsburg’s lecture titled “A Matter of Interpretation.” Among the audience were not only Carnegie Mellon students and faculty members, but also graduate students and law students from neighboring universities and members of the broader Pittsburgh community.

The event was organized by Kiron Skinner, the director of Carnegie Mellon’s Institute of Politics and Strategy and the Center for International Relations and Politics. Joseph Devine, assistant dean of Dietrich College, gave the opening remarks, and William Carter Jr., dean of the University of Pittsburgh School of Law, moderated the Q&A session following the lecture.

Judge Ginsburg is a federal judge on the United States Court of Appeals for the District of Columbia Circuit, which some may argue is the second most influential court in our nation after the Supreme Court. The popularity of the event was unsurprising, as Judge Ginsburg is considered to be — according to Devine’s introduction — “one of the nation’s most distinguished jurists.” Judge Ginsburg was even nominated for a seat on the Supreme Court by President Ronald Reagan in 1987, though he withdrew his nomination shortly thereafter. His lecture, named after the late Justice Antonin Scalia’s book A Matter of Interpretation, revolved around two major themes: the purpose of having a written constitution and the federal courts’ roles in interpreting legislative statutes.

Judge Ginsburg set the stage for his discussion on the philosophy of Justice Scalia with an in-depth explanation of common law, to which he would constantly refer back throughout the rest of his lecture. He described common law as a type of “judge-made law” in which judges decide the customs. He states that it is a process in which, “judges are hearing a dispute, resolving them in a way they think is just or appropriate or perhaps more efficient … by [using] some criteria that resolves that dispute, which puts the judge in the position of lawmaker.” This question of whether judges assume the role of discovering or creating the law steered the conversation into a more extensive exploration of Justice Scalia’s legal philosophy.

It is without a doubt that Justice Scalia’s intellectual influence had a great impact on American law and conservative politics, though he was notoriously pugnacious and was criticized by many for being callous at times. The late justice was best known for adopting a rigidly originalist approach towards his interpretation of the Constitution. He was an unwavering advocate of the principle that, “context is everything and the context of the Constitution tells us not to expect nitpicking detail and to give words and phrases an expansive rather than a narrow interpretation.” He believed “every issue of law resolved by a federal judge involves an interpretation of text” and that the idea of a living Constitution “frustrates the whole process of a written Constitution.” Judge Ginsburg defended originalism by clearly distinguishing that, “the great divide with regards to constitutional interpretation is not between the Framers’ intent and objective meaning, but rather between original meaning, whether derived from the Framers’ intent or not, and the current.”
With the progression of his lecture, it became apparent that Judge Ginsburg and Justice Scalia share tremendously similar outlooks of legal philosophy, including a disdain toward the idea of a “living Constitution.” Judge Ginsburg defined this concept to be a “body of law that, unlike normal statutes, grows and changes from age to age in order to meet the needs of changing society,” and noted that judges have the authority to determine those needs and find the changing law. He said that with this notion, common law would prevail with an infinitely powerful comeback and an influence to overturn statutes passed by the legislature. He hinted at a possible imbalance that this would cause between the three branches of our federal government.

In ending his lecture, the judge cautioned that continuing to conform to the evolving standards of decency would allow the courts to essentially rewrite the Constitution in the way that the majority wants. He concluded on a powerful note that this itself would be the end of the Bill of Rights as society has known it. Judge Ginsburg was enormously successful in both relaying Justice Scalia’s legal view in an impartial light, and illustrating the cumbersome nature of the United States Constitution. He was also able to successfully convey his personal legal philosophy without imposing his opinions on the audience, but rather offering unobtrusive yet insightful commentary throughout his discussion.