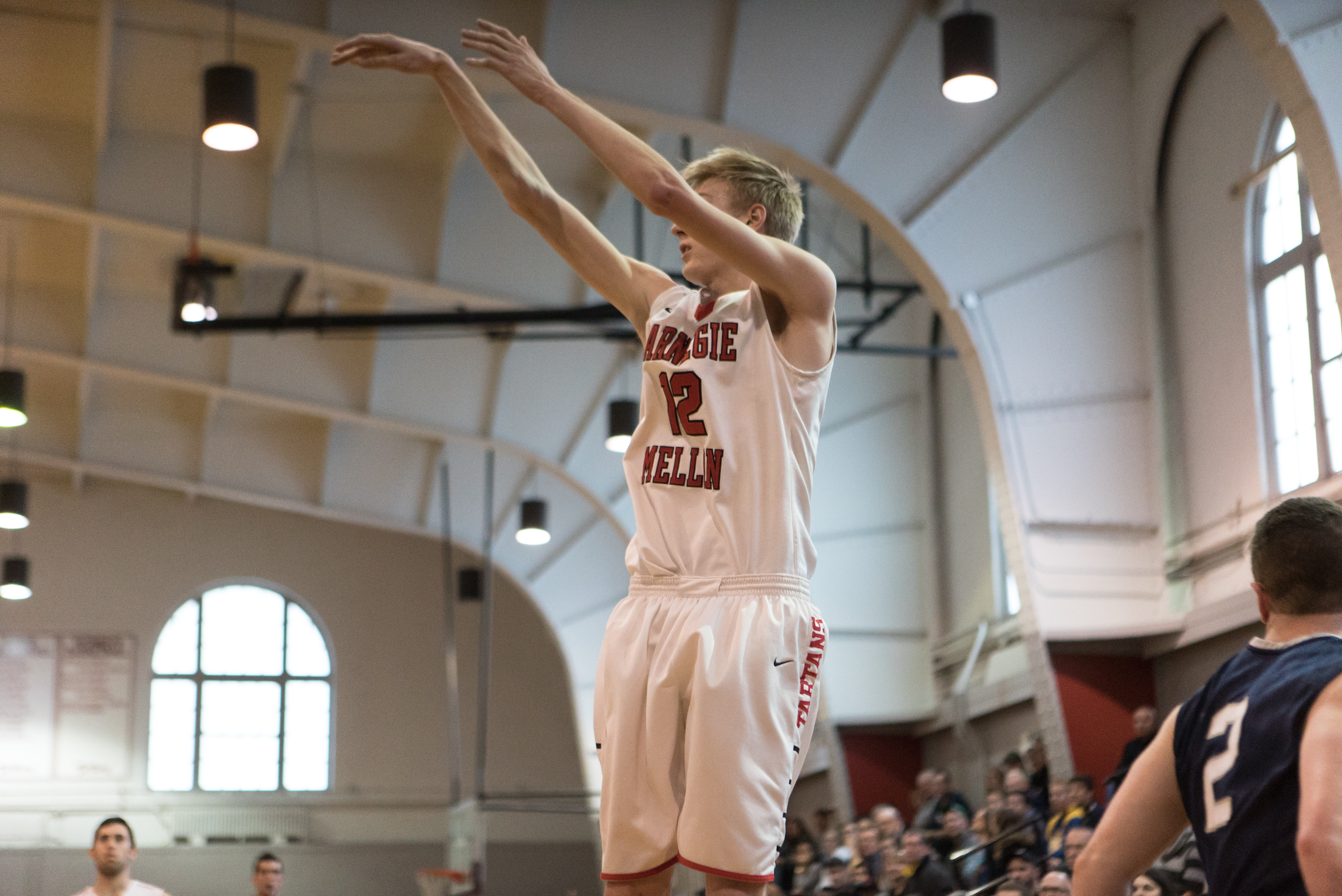 Junior Jack Serbin shoots a quick jump shot during his massive performance in the final contest of the season. (credit: Brandon Hong/Photo Editor)

The Carnegie Mellon men’s basketball team took the court on Saturday for the final contest of the season against conference rival Case Western Reserve University. The Tartans fought valiantly, but could not overcome the Spartans and fell with a score of 93–87. The loss ends the Tartans’ season with a 10–15 record, 3–11 in University Athletic Association (UAA) play.

The game opened with explosive offensive play from both sides, and the first half saw the lead change eight different times. The teams went back and forth for the majority of the half, trading fouls and points until it seemed no team would come out ahead. Junior forward Jack Serbin made the difference for the Tartans. Serbin finished a lay up with three minutes to play in the half to keep the Tartans up until the break. Serbin took control of the court, scoring 22 points in the first half alone and shooting 9 for 13 from the floor. Serbin’s massive performance sent the Tartans into the locker room with a 42–40 advantage.

The second half proved less than ideal for the Tartans, but it started with a bang. Carnegie Mellon opened the half on a 14–2 scoring run over five minutes. Five different Tartans contributed to this run, and the Tartans were gaining momentum as they found themselves up 60–48 with just over 12 minutes left to play. But the Spartans would not be silenced, and answered with a comeback of their own, scoring 11 of their next 13 points, cutting the Tartans lead to 3, 62–59.

The Tartans pushed back again, increasing their lead to double digits with seven minutes left to play as junior guard Matt Hillman hit a jumper. The score was 74–63 at this point, and the Tartans felt in control. That feeling didn’t last long however, and the Spartans quickly responded with a 14–3 scoring run of their own to tie the game at 77. The game clock ticked down, and the Spartans drained a three-pointer with just over a minute left in the game to give the visitors the lead for good.

The Tartans fought to the end, shooting 48.4 percent from the floor to the Spartans 38 percent. Serbin led all players in scoring with 36 points and tied his own season-best record with 18 rebounds. The junior closed out the season with 24 double-doubles, and scoring 20 or more points in seven games.

The Tartans may not have reached all of their goals for the year, but it was definitely a season to remember. Carnegie Mellon won their first four games, but could never manage to win consistently after that. The rest of the season was plagued by loss streaks, but the Tartans were resilient and always found a way to pull themselves out of a rut. Even in conference play, the Tartans upset a very strong University of Rochester team in double overtime to remind themselves that they can still compete with the best, even if their record does not show it. Serbin was an anchor for the Tartans this season, averaging 18.4 points per game. He scored 460 total points with 161 field goals made, shooting 42.5 percent from the field. Sophomore guard Ryan Maha has also been a force for the Tartans this season, scoring 295 pints of his own on 109 field goals. Maha shot 44.5 percent from the floor for the season.

The entire Tartan squad made this season possible, and they will be looking forward to improving in the offseason and coming back with a vengeance in the fall.