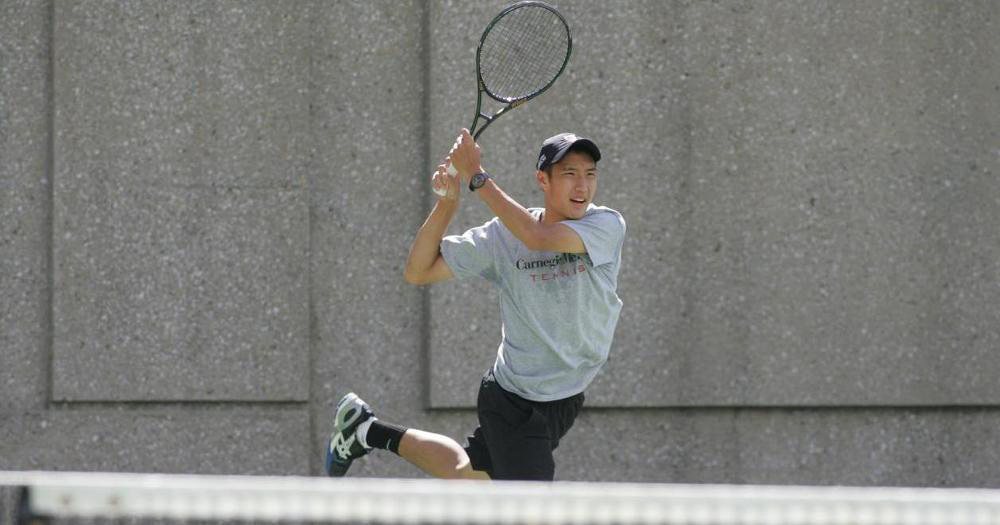 The Carnegie Mellon men’s tennis team took the court on Saturday to face off against the Saint Francis University Red Flash, an NCAA Division I opponent. The discrepancy in division might bring one to think that the Division III Tartans took the fall in this seemingly David vs. Goliath matchup, but the Tartans ended up emerging victorious in a landslide 6–1 victory, improving their record to 4–1, and bumping the Red Flash down to 5–2.
Carnegie Mellon completely dominated doubles play as the duo of seniors Yuvraj Kumar and Abhishek Alla were the first to taste victory in third doubles, winning the first slot 6–4. The first-year tandem of Vayum Arora and Daniel Levine took control of first doubles to win 7–6 (7–2), while the Tartan’s third pair of sophomore Jeffrey Chen and junior Kenny Zheng won 6–3 in second doubles. The Tartans moved into singles play feeling very confident that they could continue the sweep.

This dominating performance against a team placed two divisions higher than the Tartans shows that the men’s tennis team is a real contender for national ranking, and they are going to continue to improve on their current No. 11 rank through consistent hard work and practice.

On Sunday, the Tartans suffered a tough loss to Division I opponent Youngstown State, 4–3. Their next competition will be against Pomona-Pitzer at Case Western Reserve University in Cleveland, Ohio on Friday, Feb. 19 as they look to come back from this week’s loss.

The Carnegie Mellon women’s tennis team improved its record to a perfect 6–0 on Saturday in a match against NCAA Division I opponent Saint Francis University. The Tartans emerged victorious with a score line of 5–2, earning the doubles point and then going on to win the first four singles match in a show of incredible athletic prowess.

First-year Minami Makino and sophomore Cori Sidell worked together in first doubled to take the victory 6–1, while junior Nicholle Torres and senior Abbey Hamstra similarly dominated their match in third doubles with a score of 6–2.

The first to finish singles play for the Tartans was Sidell, who took the match in the second slot by a core of 6–4, 6–2. Torres followed her to win by the same score, improving the team’s lead to 3–0. Senior Brooke Tsu took the match point at first singles in a nail-biting come from behind win in the third set, winning with a score of 6-2, 3–6, 6–4.

The next challenge for the Tartans comes on Friday, Feb. 19, as they take on another Division I opponent, Duquesne University. The Tartans will look to continue to improve their rank against Duquesne before playing in the ITA Division III National Indoor Championship the following week. If the Tartans keep this up, they’re on track to run the gauntlet and become a force to be reckoned with on a national level.