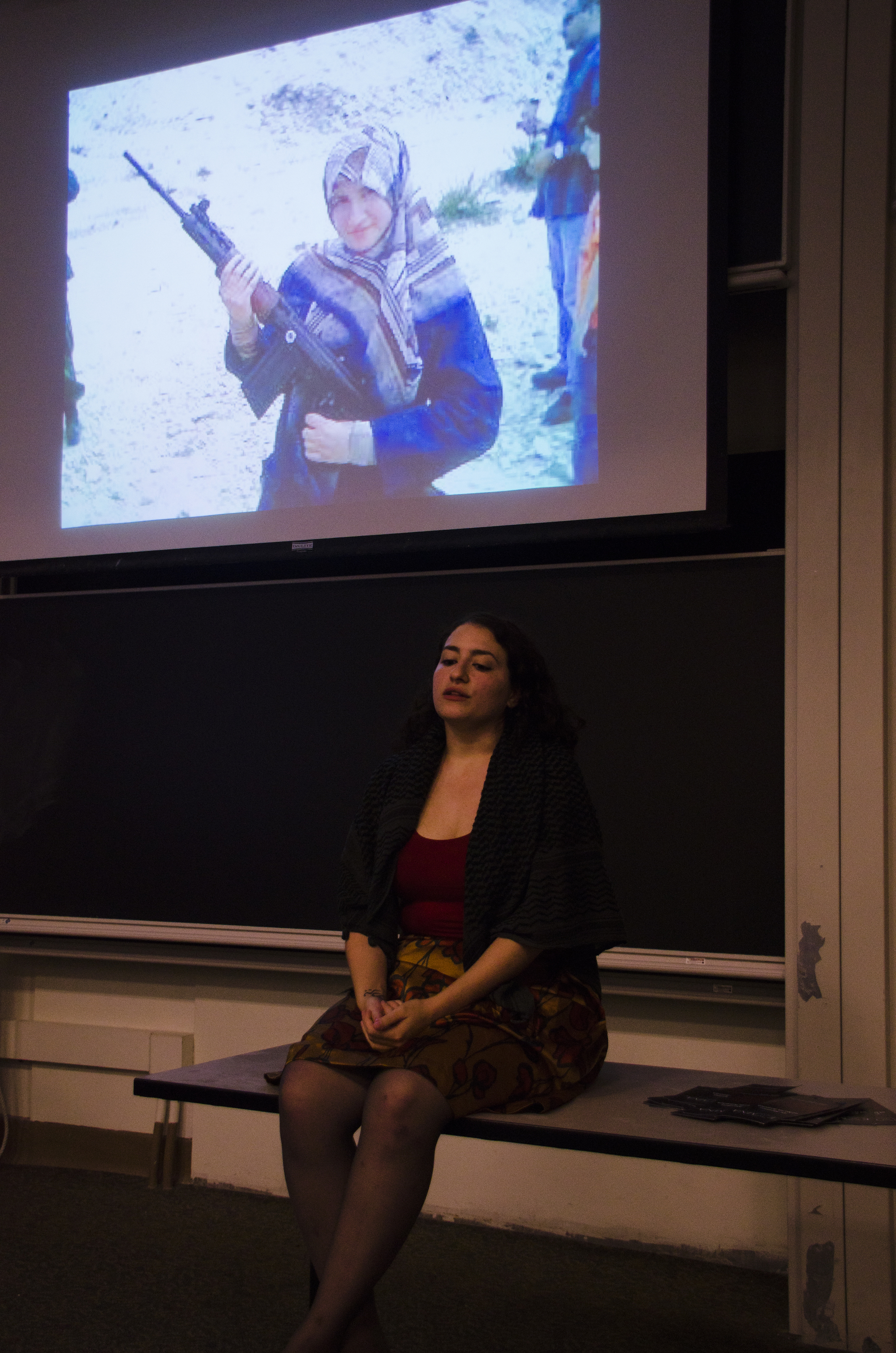 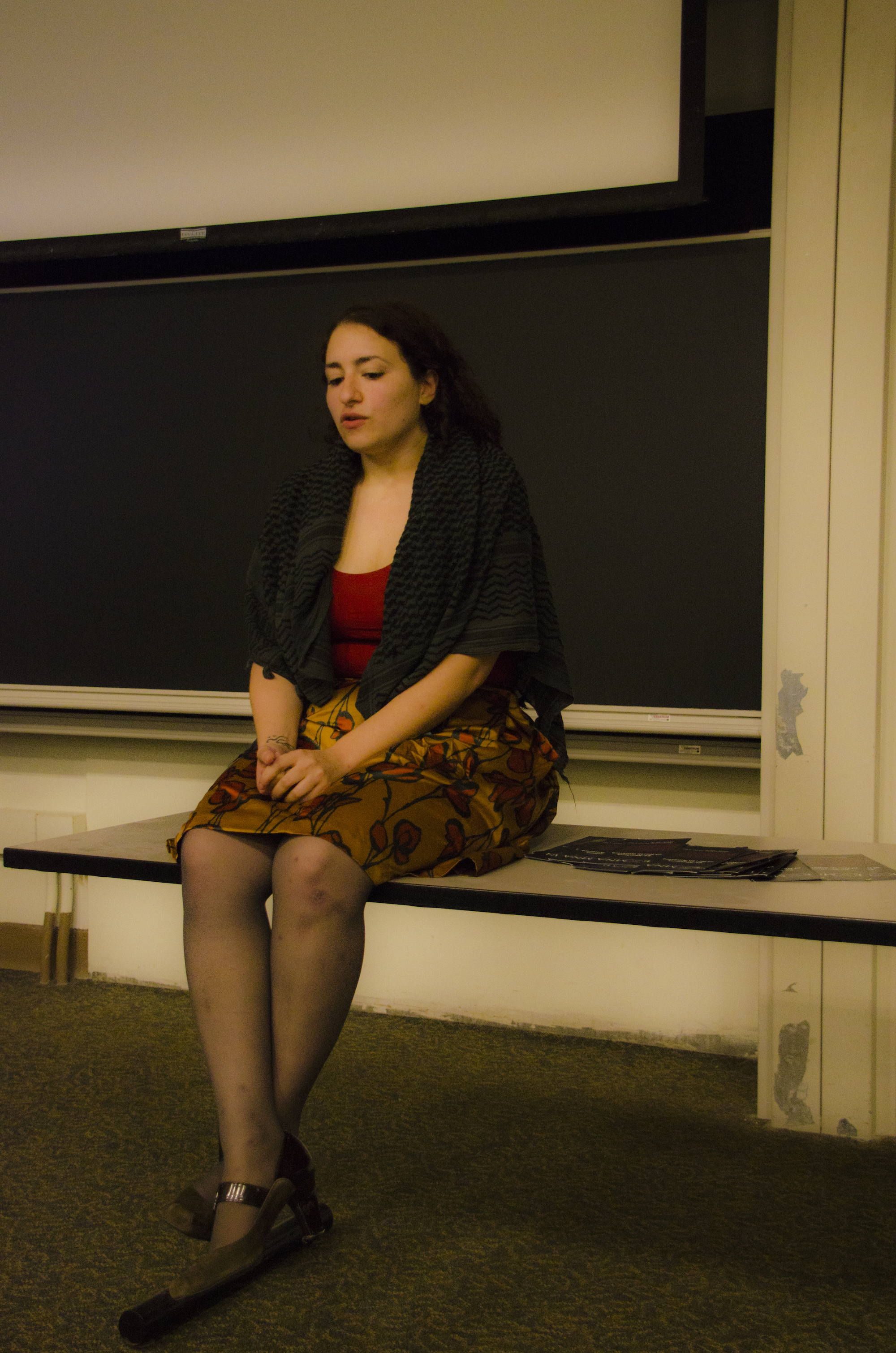 On Thursday Oct. 5, a crowd of Pittsburgh community members and Carnegie Mellon students gathered in Margaret Morrison to hear Hiba Krisht’s talk, “Veils, Virginity, and (In)visibility: On Being a Woman in Hezbollah Culture.” A member of the society Ex-Muslims of North America, Krisht spoke of these issues in the context of personal experience.

The religion of Islam is divided into two sects — Shia and Sunni — that differ by belief in who is the true “caliph,” the successor of the prophet Muhammad. Krisht explained that specific cities in Lebanon are heavily dominated by Sunni Muslims and the same is equally true of Shia Muslims. The country isn’t geographically split in two, but the strong religious divide dictates the cultural expectations within each city.

In the beginning of the talk, a photograph of her from when she still lived with her family in Lebanon was projected above Krisht. In the photograph she stood in a hijab; across her torso she held a machine gun. Krisht explained that, from looking at the specific restrictions of her clothing, it’s obvious she was a Shia Muslim. The Shia sect of Islam has stricter expectations of women in covering their body. The only part of the face that may be showing is what’s necessary for functioning. For Krisht, this meant she had to constantly make sure her hair hadn’t slipped out of the scarf, and that the scarf was pinned to hide the jawbone and chin. The scarf had to be draped over her chest and the rest of her clothing had to be loose fitting, covering her arms and legs completely. To ensure that when lifting an arm their wrists do not show, Shia women wear fake sleeves on their forearms.

In the Shia tradition, girls must wear the hijab from when they are nine lunar years of age; Krisht, like most girls, began wearing the hijab her last summer as an eight-year-old so that she didn’t have to make the transition during the school year. Krisht described that wearing a hijab is more than just a wardrobe addition — it’s adapting to a way of life. Girls are forced to adapt, to wear a hijab to protect their families’ honor; they are taught that their body is shameful and that it must be hidden from men. Being burdened with rigid expectations and beliefs at a prepubescent age doesn’t give girls the opportunity to consider an alternative or even to understand the messages they are being led to believe about their body.

Because of the inequality for women in Muslim culture, the policies surrounding women’s rights can be hard to believe given the societal norms that surround us. If a Muslim woman does not adhere to the Islamic doctrines, it is considered a dishonor to her family. It is acceptable in Muslim culture, even expected, that if a woman demonstrates rebellious behavior, she will be physically punished by her male family members. There are no laws in Lebanon to protect a woman from these crimes. In 2014, after much debate, a law was finally passed stating that “domestic violence” is illegal, but deliberately did not prohibit all violence against women.

It is legal for a man to rape his wife. If a man rapes a woman that is not his wife and is convicted of rape, he can fix his wrongdoing by proposing to his victim. This is because the crime is considered to be against the honor of the woman’s family, not against the woman or her body.

The government in Lebanon not only struggles with issues of human rights, they also often fail to provide necessities like electricity, and have done little to nothing in helping to rebuild the country after the damage from the civil war and the war with Israel. Because of this, in Shia regions like the one Hiba is from, the controlling power is Hezbollah. Hezbollah is a Shia Muslim militant group in Lebanon that is the only source of resources in most of the country. Not only do Shia Muslims praise Hezbollah for the salvation they’ve provided, Lebanese Christians and people of many other religious minorities in Lebanon praise Hezbollah.

After growing up suppressed by this culture for eighteen years, Krisht decided she must escape. Unfortunately, Krisht quickly learned through a series of events that there was a lot she didn’t know. First, Krisht was denied access to leaving the country and before she could come up with any alternate plans, Hezbollah officers found her and brought her back to her family. Because her mother had filed a missing person’s report, they had to go to the Lebanese police station to resolve the issue. This is when Krisht learned that there were no laws to protect her from the violence of honor crimes and that she must go back to her family. The last and most disheartening realization was back at school, when she found out that no one in her community was aware of what had just happened — that it was possible other women around her had tried to escape or felt the same way, but had no chance to speak up, for fear of endangering their lives.

Krisht was trapped in Lebanon and she was left with one option, to devote herself to the religion; she realized that the more you adhere to the system, the more the system will provide for you. Krisht was also lucky enough to come from a family that was able to send her to a good university, so she went to the American University of Beirut. She studied philosophy and had to hide from her parents what “philosophy” really meant so that they’d allow her to study it. She didn’t go into great detail about how she escaped Lebanon to get to America, but she did say that it took multiple years of intricate planning to get here.
Now a member of the Ex-Muslims of North America, Krisht shares her opinions on these issues and works to provide a haven for women in Muslim culture whose voices are being silenced.

Her blog can be found on the website of the Ex-Muslims of North America page where she presents unique insight and discussion of Muslim culture. Her passion for these topics shines through in the convincing arguments she presents about Islam in the media. One example is her recent article on the false equivalence of burkinis and bikinis, resulting from the new law in France that bans burkinis as swimsuits. The article and others on similar topics can be found at exmna.org.

The event was organized by Carnegie Mellon’s Humanist League, which meets Thursdays at 4:30 p.m. in Wean 5302; their mantra is “Exploring life’s big questions, Bridging humanity’s differences, Promoting dialogue over dogma.”