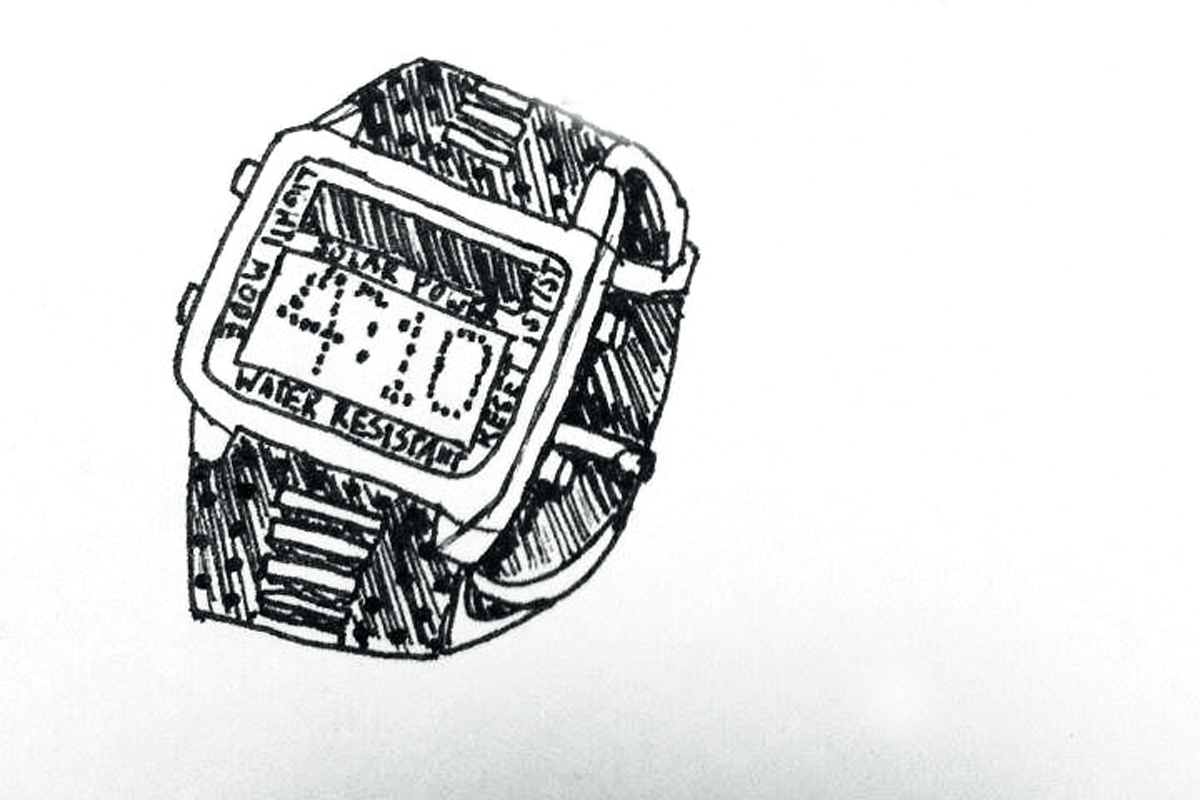 In The Hitchhiker’s Guide to the Galaxy, humans are described as “so amazingly primitive they still think digital watches are a good idea.” In these days of cellphones and “smart watches” that tell you about texts and let you make calls, the digital watch may look a little outmoded. However, while no longer as popular as they once were, digital watches are still a useful piece of everyday technology.

According to a PC Magazine timeline on the history of the digital watch, the first digital watch used gears and springs, just like an analog clock, but displayed numbers instead of moving hands to indicate the time.

The first publicly available watch that used not only a digital display but also digital technology in the form of circuits was the Hamilton Watch Company’s 1972 Hamilton Pulsar. Plated in gold and using a synthetic ruby as part of its LED (Light Emitting Diode) system, the Pulsar cost $2,100 (around $11,400 today, adjusted for inflation). That combination of technology and luxury earned the watch a spot on the wrist of James Bond in 1973’s Live and Let Die.

While there have been several developments in the world of watch innards since the Pulsar came out, perhaps the most important change has been in the display. LEDs are today considered a very energy efficient light bulb, recommended by Forbes Magazine over compact fluorescents for the budget conscious However, the models used in early wrist watches used a lot of power. Further, the wearer would have to temporarily activate the display, a process that required the wearer to use both hands.

PC Magazine’s timeline indicates that the big shift in digital wristwatch technology, from luxury status items costing thousands of dollars to everyday $20 timepieces at your local Walmart, came in 1973 with the introduction of the LCD (Liquid Crystal Display) screen. While early models were almost as power hungry as the LED displays, the 1973 Seiko 06LC introduced the style of LCD still used in most digital watches today.

As their name suggests, liquid crystals have both a consistent shape and structure like crystals, but can flow like liquids. An informative page from Case Western Reserve University explains how the most common type of LCD, the Twisted Nematic Display, works by suspending nematic liquid crystals between two plates of glass. Nematic means “string-like” in Greek and indicates the shape of the crystals, which form a long chain, according to Whatis.com.

When a voltage is applied to a nematic crystal, the molecules that make up the crystal alter their orientation, thus changing their polarization and affecting how much light is able to pass through or be reflected by the crystal.

They work similarly to microscopic Venetian blinds: they have an “open” position that lets light through when there’s no current, and when electricity is applied to the crystals, they shift positions and polarity, effectively “closing” the blinds. The amount of energy it takes to alter the shape of these crystals in the case of a one color wristwatch screen is very low, which is why watch batteries can last so long.

The key to digital watch displays is that the liquid crystals primarily block or reflect light instead of emitting it. Light bounces off of the “activated” areas and passes through the deactivated areas, but no light is actually cast by a typical LCD screen.

As a result, many watches still have an LED light, but only use it to light up the watch face in the dark when a button is pushed. This draws more power than the LCD display, but it will let you read the time in the dark without constantly drawing extra power when its not needed, while still making it easy to read when there is ambient light.

LCDs make up the faces of most digital watches, so the next time you look to your wrist to figure out the time, remember that this is most likely the science behind what you’re seeing.