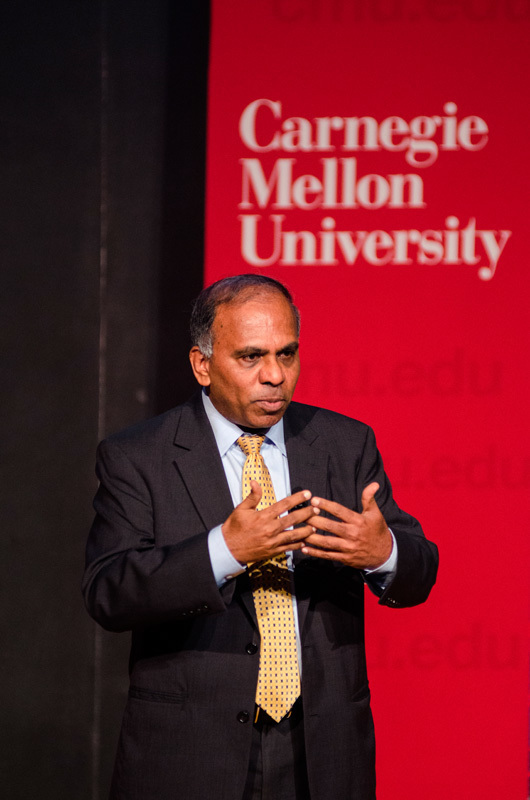 Carnegie Mellon University President Subra Suresh took center stage last Wednesday at a town hall event to address questions and concerns from the Carnegie Mellon community. A crowd of mostly faculty and administrative staff gathered in McConomy Auditorium to hear Suresh’s ideas about the future of the university, its costs, academics, and culture.

Carnegie Mellon’s Vice President of Communications and Marketing Steve Kloehn guided the discussion, and select faculty, staff, and students were asked to share their questions. Kloehn also included questions which had been previously submitted online.

M. Shernell Smith, the assistant director of student affairs, posed the first question: “How do you see staff engagement as a part of the transformative CMU experience? And what do you say to those staff members who don’t always feel like they are at the table for some of those particular dialogues?” she asked.

Suresh named his strategic plan initiative, town hall meetings, email solicitations, and more as ways that his administration has engaged the Carnegie Mellon community. Suresh said he’s been pleased with the community’s “unprecedented strategic planning,” and suggested that he wants his strategic plan to be a thoroughly dynamic and collaborative project.

When a computer science student asked online whether there was a downside to the Computer Science department’s growing number of corporate partnerships, Suresh responded reassuringly. For Suresh, companies like Google, Yahoo, and Microsoft want to have close relationships with the School of Computer Science because of the student and faculty’s work. He cited Tata Consultancy Service’s recent $35 million donation to Carnegie Mellon as an example of this support for student’s work.

Since the Computer Science student’s question was concerned with how certain partnerships could alienate competing companies, Suresh gave a prime example of Carnegie Mellon’s more neutral positioning. “We don’t take sides,” he explained. “We even work with UPMC and Highmark. If you can do that, you can do anything... There is nothing in these partnerships that conveys exclusivity.”

Sophomore international relations and politics and policy and management double major and Dietrich College senator Michael Gormley said that he felt “disassociated” from Carnegie Mellon’s smaller campuses in Qatar and Rwanda. Suresh noted that since the Pittsburgh campus is vastly larger than its international campuses, the size disparity challenges the process of building bridges between the communities.

Suresh did mention the University’s IMPAQT program, which connects Pittsburgh students to Qatar students with annual trips to the different campuses. Student groups like Project Rwanda also reach out and engage with the other campuses, he said.

On a heavier note, one submitted question addressed the campus sexual assault crisis. Suresh applauded the work of Dean of Student Affairs Gina Casalegno as well as the Sexual Violence Prevention Program enacted last year in combating this issue faced by campuses nationwide.

Suresh acknowledged that campus sexual assault is a “complex, national issue we need to address as a community. Everyone in the community has a role to play, including bystanders.” He mentioned that upcoming roundtables and new programs this year will continue to address the pressing matter.

Ömer Akin, professor of architecture, questioned whether the university truly sustains its commitment to creativity. Akin expressed concern for flagging support of the College of Fine Arts and Dietrich College of Humanities and Social Sciences, two colleges which Akin believes to be centers of creativity on campus.

Suresh confirmed that his strategic plan will foster and support creativity on campus. He mentioned that both schools were recently awarded $1 million “challenge grants” last year. “Use this to support your faculty and we would like to see how you can grow this,” he told the schools. “I’ll be coming back to see how they’ve grown it before too long.” Suresh also believes that the Digital Humanities program should also promote Dietrich.

Suresh still believes that both schools need to provide a clearer idea of what they will add to the Forbes Corridor, which he hopes will be the premier hub of creativity and innovation between Silicon Valley and the East Coast. “Is it backed by reality? Is it backed by data? Yes,” he affirmed.

An undergraduate student posed a question concerning race, asking how can Carnegie Mellon better embrace the evolving definition of diversity. President Suresh promised dedication to this challenge. “We will do everything possible to attract a diversity of student and faculty cohorts,” he said.

He used this year’s undergraduate freshman class as an example of increasing diversity. Although Western Pennsylvania is not known for attracting the most diverse of people, he feels confident that Carnegie Mellon has the resources to attract people of all backgrounds.

Lastly, Suresh discussed how technology will impact higher education in the years to come. He does believe that online learning will disrupt universities’ financial models, yet still sees students wanting and needing to be physically present on campuses.

Suresh will host his next town hall in the spring.