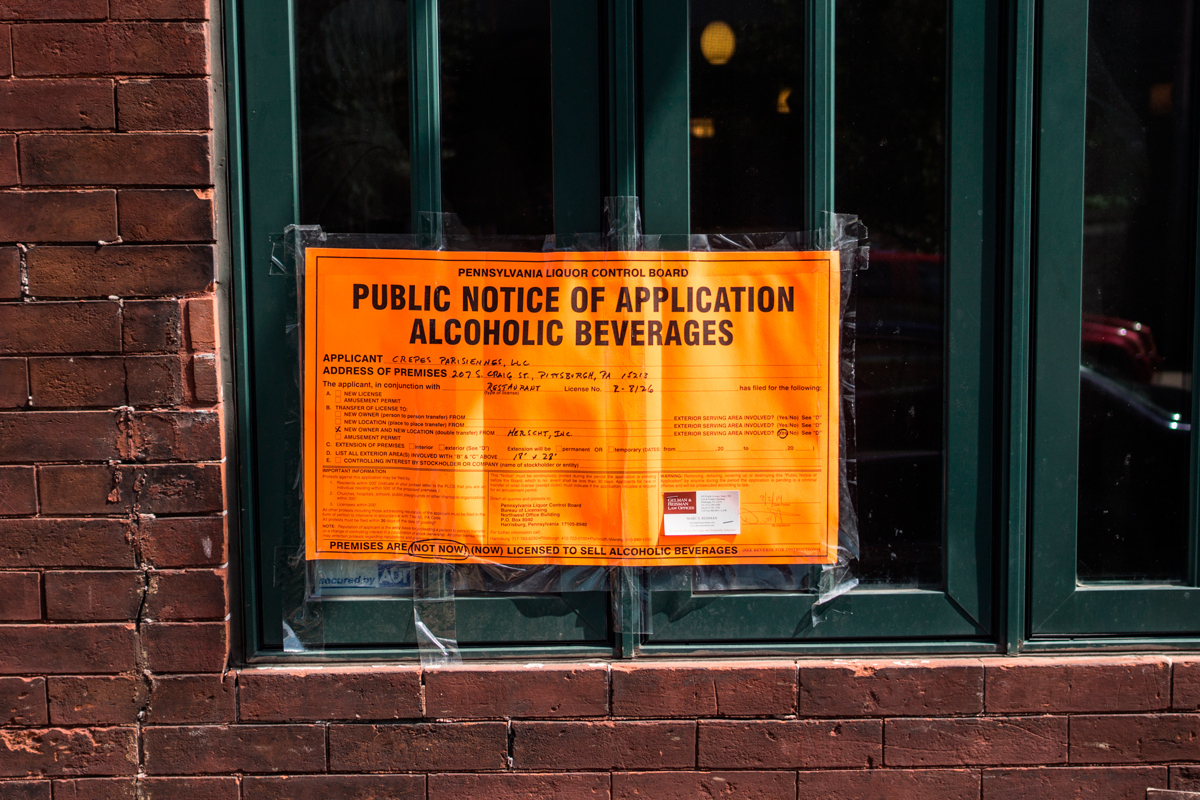 Crepes Parisiennes, a creperie at 207 S. Craig St., recently applied for a liquor license so that it can offer hard cider alongside their crepes. (credit: Yeongwoo Hwang/)

Crepes Parisiennes is looking to provide customers with more than its already-wide range of crepes, waffles, and pastries — it is now applying for a liquor license.

According to documents from the Office of City Clerk, a resolution for a transfer of licenses to the owners of the creperie has passed. Although it is not clear when the license will become effective, the documents state that the restaurant will soon be able to sell liquor.

The expansion into alcohol sales is the latest evolution of a business that started in 1998 as a cart on the corner of Margaret Morrison and Tech Street. There, co-owner David Handler sold crepes before the spot was given over to students in the Tepper School of Business. It is now used for vending freshly grilled burgers and hot dogs.

In 2000, after two years of selling crepes from a cart, Handler opened Crepes Parisiennes in Shadyside, and four years after that, established a location on S. Craig Street This past August, however, Handler chose to close down his Shadyside location, in favor of promoting the Craig Street site.

“We did well there, and I took a pay cut,” he explained. “But I wanted to build up business for this great location.” A part of accomplishing this goal will be the inclusion of alcohol on the menu.

Handler, along with co-owner and wife Shannon Handler, is looking to increase the seating available at the Craig Street location. The plan is to erect a sun room in the back, along with patio seating in the interim.

Handler speculated that, with time, Crepes Parisiennes might offer a wide selection of drinks and cultivate a bar-like atmosphere in the expanded areas. This change would come complete with extended hours two or three nights a week.

Currently though, Handler wants to keep things simple and classic: “What I really would like to do is sell hard cider,” he said. “It’s traditional.”

His idea corresponds with a practice stemming from the Brittany region of France. The area is known both for its crepes and hard cider, which Handler said pair well together.

He has not decided on what brand he would like to serve, but he is already considering his options. He says he is contemplating both imports and Arsenal Cider, a local hard cider made in Lawrenceville. Whichever label is chosen, Handler is sure it will match harmoniously with the existing fare.

The changes to Crepes Parisiennes’ menu come in a time of changes for the Craig Street corridor. Over the summer, the Panther Hollow Inn at 4611 Forbes Ave. closed its doors for the last time, and will be replaced in the coming months with a Chipotle Mexican Grill.

The university is also investing in Craig Street; last year the PNC Bank on the corner of Forbes Avenue and S. Craig Street was replaced by the university’s Integrated Innovation Institute.

The Carnegie Mellon community seems to be looking forward to the coming developments at the creperie. “I think it’s interesting,” sophomore computer science and mathematics major Aaron Friedlander said. “The thought of crepes and alcohol could be fun.”

Even Cage Schmidt, who often works at the Creperie in the Jared L. Cohon University Center, a competitor to Crepes Parisiennes, is excited for the coming changes. Schmidt said, “I definitely want to go down there. I’ll take my girlfriend — she can’t drink but I will.”