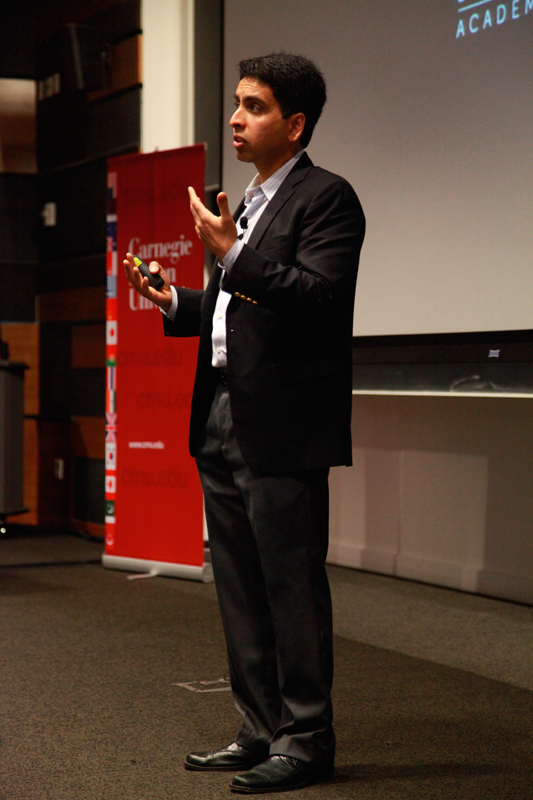 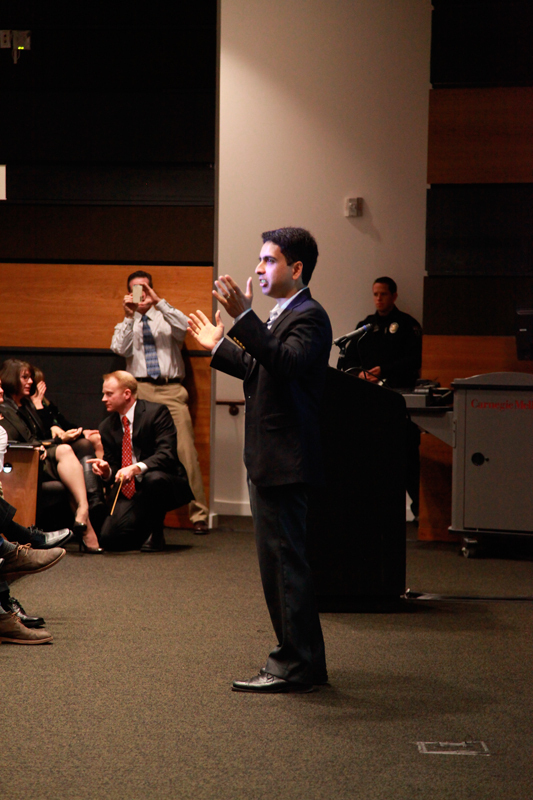 Students, faculty and staff jostled to get into Rashid Auditorium to hear a talk by Sal Khan, founder of Khan Academy, Thursday morning. Ten minutes before the speech was scheduled to begin, the 250-seat auditorium was standing room only — it was so crowded that the University Police closed the doors, barring additional spectators to prevent a fire hazard.

Determined to see Khan, many students looked in through the window instead, like Robert Buarque de Macedo, a sophomore physics major, who said that seeing Khan was amazing after hearing his voice so often in Khan Academy videos. “Khan helped me through high school,” Macedo said, although he had never met Khan nor seen him in person before. Aatish Nayak, a first-year electrical and computer engineering major, added, “It’s crazy that [Khan] makes his own videos; it shows his dedication.”

Khan’s videos, which now form the basis of the website Khan Academy, have become enormously popular, with more than 10 million students viewing them each month.

Khan is, in many ways, an accidental educator. While working for a hedge fund, his family was visiting and he learned that his cousin Nadia was struggling in math. “I told her, ‘Look, I think you’re fully capable of this … if you’re willing to … we’ll work on the phone everyday,’ ” Khan said. Starting in August 2004, Khan worked with her on her math skills while he lived in Boston and she lived in New Orleans.
Khan’s belief that everyone can succeed if given the right education drives much of his work.

Nadia rapidly progressed in her school from “slow” math to an advanced track — her success inspired other family members to ask Khan for tutoring help. Khan, who has a background in software, started writing quizzes for his students to take and was mentoring as many as 10 family members at once. A friend recommended to Khan that he prerecord his lessons and load them onto YouTube so he could scale to more students.

Khan was apprehensive at first, saying, “That’s a horrible idea. YouTube is for cats playing the piano.” But after a month of using the YouTube videos, his cousins told him that they preferred the videos over the video chats.

“It soon became clear that people who were not my cousins were watching the videos. Most of the comments were just ‘Thank you’ which is a pretty big deal. I don’t know how many of you watch YouTube, but most of the comments are not ‘Thank you,’ ” Khan said. “Then [the comments] got more intense, like ‘this is the reason I passed algebra,’ ‘this is the reason I decided to major in engineering.’ ”
Khan’s success on YouTube kick-started his career as one of the most well-known online educators in the U.S.

Khan’s mission is “to provide a free world-class education for anyone, anywhere.”

Khan sees online education as a “once in a millennium” chance to change education’s inaccessibility by giving his content away for free.

Khan was in Pittsburgh to receive the 19th annual Heinz Award for his advancement of the human condition.

His speech at Carnegie Mellon is part of the Distinguished Lecture Series for President Subra Suresh’s newly launched Simon Initiative, which will explore technology-enhanced education such as the Khan Academy.

Khan closed his talk with an anecdote to illustrate the potential he sees for more widespread education delivered with novel technology to transform our society.

“If you were to go back 400 years to Western Europe, you had a 15–20 percent literacy rate,” Khan said. “If you asked a clergy member, ‘What percentage of the population is capable of reading,’ they might have said … ‘40 or 50 percent are even capable of reading.’ We now know that’s widely pessimistic; the answer is pretty close to 100 percent.”

The historical example was meant to show how easy it is to doubt students. Khan ended his lecture by challenging the audience.

“What similar blinders do we have on today? If we ask ourselves what percentage of people are capable of understanding quantum physics, you might say maybe one percent, maybe five percent ... what percentage of people are capable of contributing to genomics research? Maybe ten percent, maybe 15 percent ... But what if over the next 10 or 20 years, … that gets closer to 100 percent? ... [What] if education becomes a basic human right?”

“I think that will be a very exciting time to live,” Khan concluded.