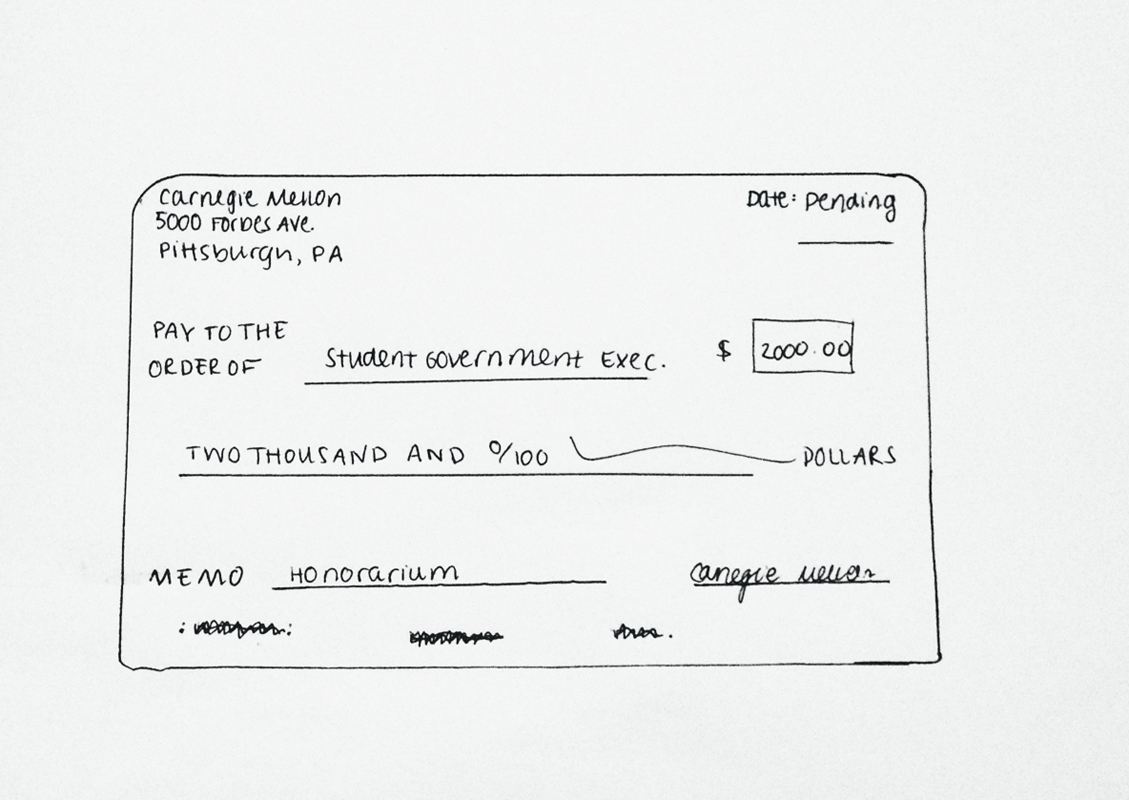 Student Senate recently discussed a line item in the Joint Funding Committee (JFC)’s budget for the upcoming fiscal year regarding supplying an honorarium for student government officials — a line item that was voted down by Student Senate, but will be either confirmed or denied at a joint JFC ratification meeting this Thursday.

In order for the provision of financing the student government executive committee’s positions to pass, Student Senate and the Graduate Student Assembly (GSA) need to approve of the budget — a motion that will occur at the joint ratification meeting this week.

Senior chemistry major and Chair of Student Senate Lukas Ronner said, “It has been a contentious issue. What happened in Senate was that we knew it would be controversial and we wanted to bring it up as a point of discussion before the actual point on the slate so Senate would be better prepared to act one way or another.”

At Thursday’s Senate General Body Meeting, senators argued for and against the inclusion of the line item in the budget.

According to the American Student Government Association, 77 percent of student government officials at American universities are paid.

Junior statistics major and current SBVPF Jalen Poteat said, “I’m for paying student government executives because being in this position, and seeing the amount of time we put into our roles and the type of tasks we have to do in this position justifies an honorarium. With the sort of things we deal with on a day-to-day basis — working with the administration and being the face of the student body — a small token of appreciation would alleviate some of the stress of day-to-day expenses we make throughout the year.”

The first argument raised regarding accountability mentioned the difficulty of removing officials once they are elected to office. The last time Student Senate tried to remove the SBP from office was in 2012, when the student government moved to impeach Jake Flittner (CIT ’12) because he had ceased to perform his presidential duties.

Although Flittner was impeached, he was not removed from office.

Ronner said, “In that case, even if he was impeached, he would still be getting paid money to do that position because he wasn’t removed from office. The people who we hire can be fired very easily if someone’s not doing their job. Student government-elected officials do not have that sort of accountability; removing someone from office is a lengthy process and rarely happens.”

“It’s much harder to hold student government officials accountable if they aren’t doing their job,” he continued.

Other senators against the inclusion of the line item argued that out of the four student government positions, SBVPF was the only position that should be financed because his or her position requires the most work. A point was brought up in discussion about paying each member of the executive committee equally.

“There’s another issue about weighing each member of student executive in monetary values. If these positions are so time consuming, instead of paying somebody for their time, perhaps the job needs to make it restructured so that it is not so time-consuming,” Ronner said.

Sophomore international relations and politics and French and Francophone studies double major Ariel Lee said, “I don’t think student government executives should be paid positions because the work each person does in those positions is not quantifiable — one person can do more work but see less results in a given term. I think the people who really do care about our school and want to enact change will be people who do not need a monetary incentive to do so.”

One of the biggest arguments against financing the positions was that the honorariums would come straight out of the student activities fee. At $1,000 per semester per executive, the JFC would be using $8,000 of student finances to give the student government executives honorariums.

Ronner said, “Senate chose to fund the Arts Pass program last year, but at $5,000 less than what they asked for. It seems contradictory to not fund five grand to a program that benefits all students and then turn around and pay eight grand to fund a pool of four people. Is paying student executives a reasonable thing to do with student activities money?”

Poteat said, “I think that in the grand scheme of things, if the JFC’s task is to effectively allocate student activity fees as well as possible, giving $2,000 to each student body [executive] — whose role it is to keep the student body happy and maintain the relationship between the students and the administration — is definitely worth it. In the grand scheme of things, the $8,000 is only a small dip into the bucket of money that the JFC has to allocate.”

Those who had mixed feelings about the issue thought that more time was needed in order to promote transparency among the student body, which is currently uneducated on the issue.

Junior biological sciences major and SBVP-elect Shalini Ray said, “This topic, like any other major change, has many reasonable pros and cons to it. It was a decision made by the JFC and VPF to put in the proposed budget for next year, but there is still a long way to go and much more to discuss before anything gets approved or denied by student government.”

In an email sent to members of Senate’s Communications Committee, third-year architecture major and French and Francophone studies double major Travis Rozich wrote, “I think the promotion of general awareness is of greater priority than a campaign whose goal is to take advantage of an inherent bias and skew opinions in our favor. Despite what Senate may think (which, though it was largely against the proposal, was still divided on the issue and by no means unanimous), in my responsibility our opinion [sic] as the Communications Committee is to ensure the proper information is understood by the students, and to open up an avenue for dialogue so that student government as a whole can listen to what their constituents believe.”

Many senators felt that the issue of whether or not to give an honorarium to student government executives should be polled via a student referendum.

This is not the first time student government has tried to pass this sort of line item in the budget.

In 2010, a referendum to pay student executive members was attempted, but it did not pass. In that poll from 2010, 473 students supported the line item, 1,029 did not support it, and 509 did not respond to the poll.
“Personally, I am very opposed to paying student government executives,” Ronner said. “Restructuring the roles rather than paying people to do them makes more sense.”

“I also think that in terms of looking at the function of each role, it makes a lot more sense to pay the VPF and VPO, rather than the SBP and SBVP because they have more nebulous roles in executive. I certainly understand that there are valid reasons for paying exec but I think it needs to be done in a way in which the student body understands and is okay with,” he continued.

At the joint JFC ratification meeting this Thursday, the budget including the line item which grants honorarium to student government executives will be up for approval by the GSA, Student Senate, and the JFC.

Poteat, although in favor of the honorarium, said he will not push the issue if it is clear that it will not be approved. “I am in no way going to try to force this to pass if I know it’s not,” Poteat said. “The Senate meeting was insightful because it let me know how Senate felt about giving student execs honorarium. If we are going to approach this again, we need to lay out all the different options and flesh out all the questions, such as are we against paying student execs in general, getting paid the same amount, getting paid using the student activities fee?”

“As VPF, my overall purpose is to make sure the budget gets slated, so I don’t want this to be the issue holding it back,” he added. “It’s not fair for other organizations not to get their budgets through just for the sake of me and other student execs not getting an honorarium, so I am by all means ready to let it go if it gets to that point.”

Student Senate will be making greater efforts to communicate with the student body about this issue, if brought up again in the future. If Senate and the GSA vote to remove the line item this Thursday at the joint ratification meeting, the issue will be closed for this fiscal year. If they do not vote to remove the line item, the issue will be discussed again and voted on, potentially separately from the existing budget.