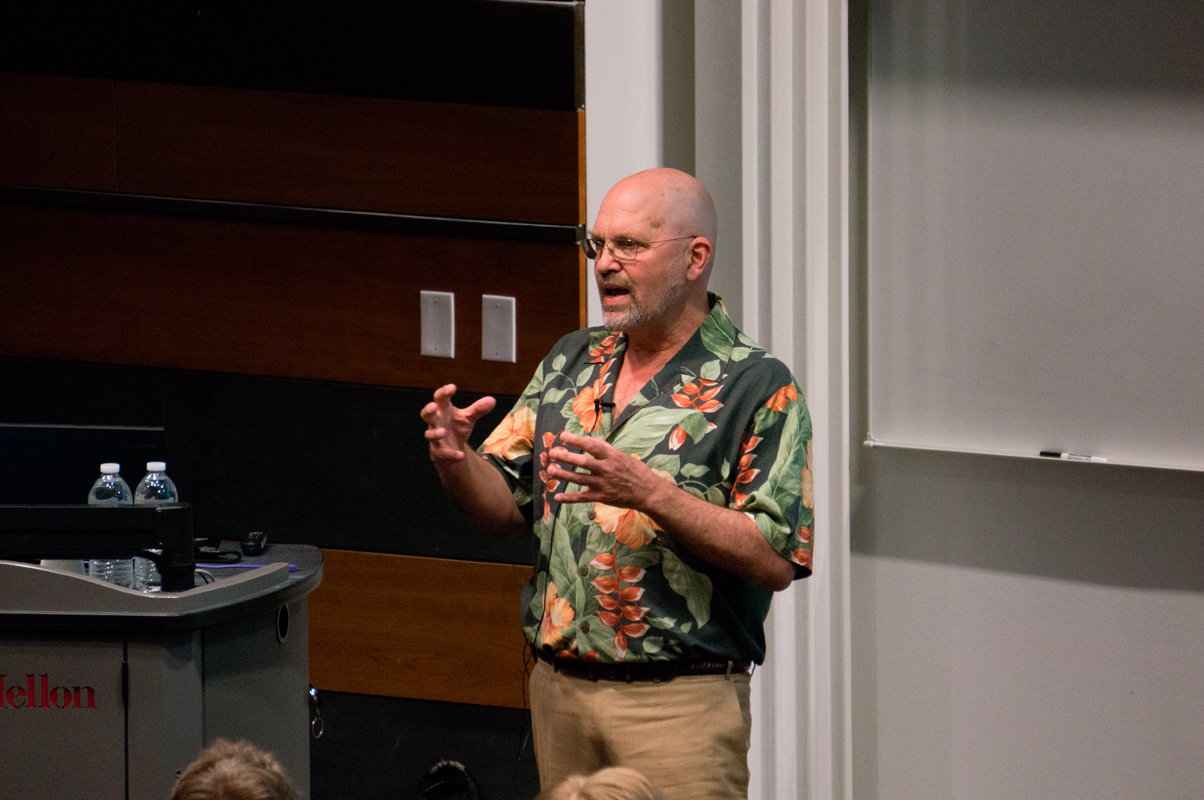 To kick off the celebrations for National Robotics Week, Chief Technology Officer and Director of Boston Dynamics Marc Raibert delivered this year’s Teruko Yata Memorial Lecture in Robotics this Thursday to members of the Carnegie Mellon community.

Raibert is not a stranger to Carnegie Mellon: He was an associate professor of computer science at the university and a member of the Robotics Institute from 1981 to 1986. While at Carnegie Mellon, he established the Leg Lab, which specialized in developing robots that use legs to move and balance dynamically instead of relying on wheels or treads used by most robots. After moving the lab to The Massachusetts Institute of Technology in 1986, he used his work to form Boston Dynamics in 1992. The company does not sell commercial robots, but has instead relied on funding from partners like the Defense Advanced Research Projects Agency (DARPA) to advance the field of robotics through its research. Google recently acquired Boston Dynamics on Dec. 13, 2013.

Raibert’s lecture, “Walk, Bound, Gallop, Climb,” focused on the work Boston Dynamics has done since the success of BigDog, their groundbreaking project from 2005. BigDog is a four-legged robot with dynamic stabilization, which allows it to traverse rough terrain like rocky hills or snow-covered trails.

It can even recover its balance if shoved. Videos of BigDog have been YouTube hits, generating more than 20 million views and spawning numerous parodies. Raibert and the rest of Boston Dynamics are now aiming to develop the ideas behind BigDog further to create a new generation of robots that are unprecedentedly strong, dexterous, and agile.

One of the robots presented during the event was the Legged Squad Support System (LS3). Like BigDog before it, LS3 is a four-legged robot with dynamic stabilization. In contrast to BigDog, which was noisy and could only travel 12 miles, LS3 is relatively quiet and can travel up to 20 miles while carrying 400 pounds of equipment. DARPA has supported the development of LS3, going so far as to create its own test courses for evaluating the effectiveness of LS3 in the field.

Boston Dynamics is working on advancing the speed of their robots as well. Their Wildcat robot is capable of galloping or bounding short distances across paved surfaces at 16 miles per hour. Cheetah, an earlier tethered robot from Boston Dynamics, could run 28 miles per hour.

Teams at Boston Dynamics are now working on developing humanoid robots with dynamic stabilization. One such robot, PETMAN, can perform a wide array of motions like walking, skating, and stretching. It is intended to help test the effectiveness of clothing that protects against chemicals, a task that has traditionally required humans to perform repetitive movements over many hours.

PETMAN can perform these very same movements, allowing for the clothing to be tested without the need for humans. Another humanoid robot, Atlas, is designed to traverse rough terrain like that negotiated by BigDog and LS3. Several copies of Atlas are currently being used in the DARPA Robotics Challenge, an ongoing competition to develop robots capable of performing a variety of tasks that could be helpful in disaster scenarios like a nuclear reactor accident.

After the lecture, Raibert fielded questions from the audience. He conveyed openness to considering new ideas and techniques, saying that he tries to avoid being “too religious” in his existing beliefs. When asked about the safety and compliance measures currently in place, he also acknowledged that the company has work to do in making their robots safe for use around humans.

When asked about Boston Dynamics’s future, Raibert admitted that he could not discuss much about their work since the company was acquired by Google, but later teased that he and his team “are going to make smaller things now.”