Mobots navigate race course for the 20th year despite rain 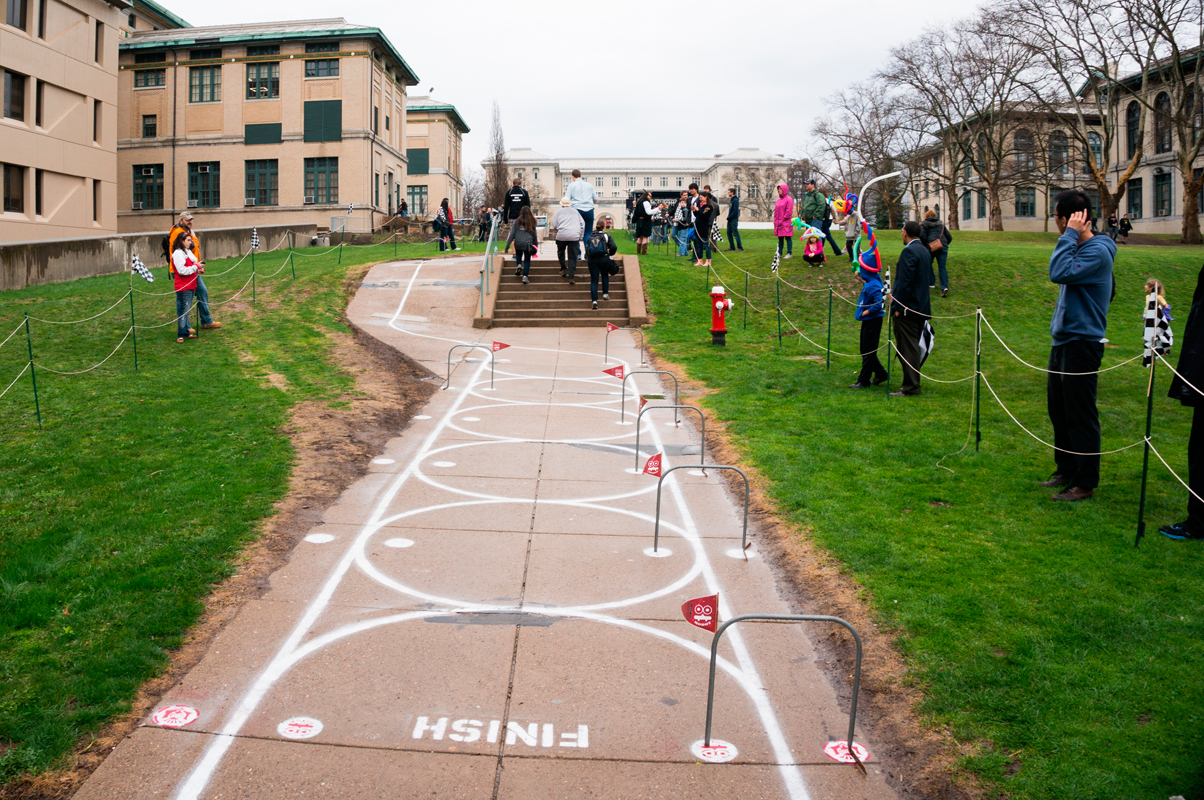 Mobots had to nagivate along a path outside Wean Hall. (credit: Abhinav Gautam/) 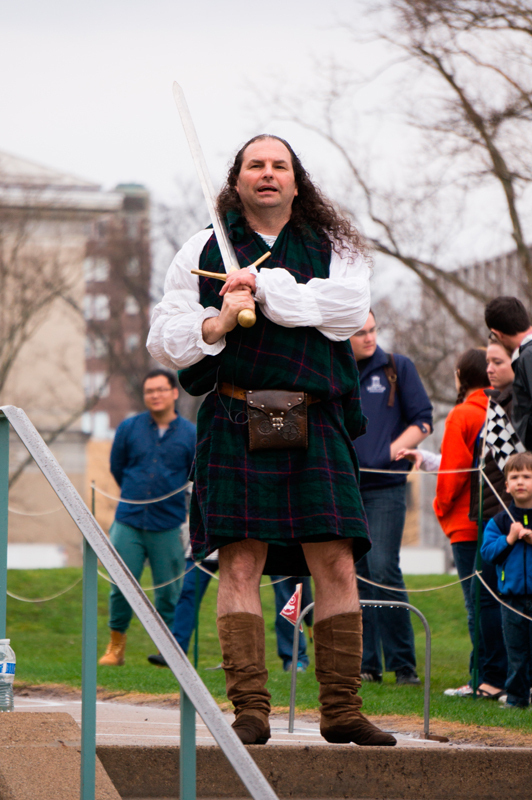 Armstrong commentated the races in a kilt. (credit: Abhinav Gautam/)

On the first day of Carnival, comedian Hannibal Buress took the stage at Midway and poked fun at some of the oddities about Carnegie Mellon University. He laughed at our fraternities for standing around, playing a ball-throwing game while blasting “Call Me Maybe.” He laughed at our students for wearing Google Glass. He also jokingly assumed that everyone in the audience was a robot-builder. It seemed that he was almost flabbergasted at the peculiarity of the Carnegie Mellon community.

For that reason, it’s a good thing Buress didn’t stay a day longer to watch the 20th annual Mobot Races, a competition in which participants race autonomous vehicles (Mobile Robots) along the slalom course outside of Wean Hall.

The event took place Friday afternoon amid a downpour of rain. The Buggy races were scheduled for Friday as well, but were rescheduled for Saturday due to the bad weather. However, in true competitive spirit, about 100 people — the contestants, hosts, and audience of the Mobot Races alike — lined up outside of Wean Hall in the bludgeoning rain holding umbrellas, and wearing coats, plastic wrap, and whatever else they could find to keep dry. Rain or shine, robots were going to be raced on that day.

The race track was composed of curved white lines outside of Wean Hall. The robots started at the top of the hill and followed the path to the bottom of the hill. Small metal gates were placed over the white lines, and the robots had to navigate their way through the arches.

This navigation became challenging at certain points further down the course because there were multiple white line paths that could be taken, but only some of them had the arches that the robots needed to pass through. Each robot was raced individually, and the one that got the farthest in the fastest time was crowned the winner.

To visualize the scene, imagine a crowd of screaming fans lined up on either side of the race track. Now imagine a man dressed in a plaid kilt waving a sword while commentating on the race — this is Greg Armstrong, a senior research technician at the Carnegie Mellon Robotics Institute. Every time a competing robot successfully navigated through a gate, Armstrong would yell “Hip! Hip!” and all the people surrounding the scene would respond with a loud “Hooray!” Finally, in a great crescendo, when the robot reached the end, hysteria would erupt as the fans cheered wildly.
There were two divisions — the undergraduate division and the open division — and a winner was crowned in each.

The Ben Brown (Judges) Choice Prize was given to Team Megubot 7, which consisted of Megan McKelvey, a C-MITES student, and her father, Terence McKelvey. Megubot 7 passed through the fourteenth gate with a time of 1:40.65. There was also a Special Mention given to sophomore electrical and computer engineering major Hui Jun Tay and sophomore mechanical engineering major Vijay Sampath. Their Mobot passed through the first gate with a time of 1:31.47.

The Mobot Races are an event that embodies the spirit of Carnegie Mellon.

Even though not all robots made it through the course, the work that went into each and every one of them was apparent.