An interview with Alexis Ohanian 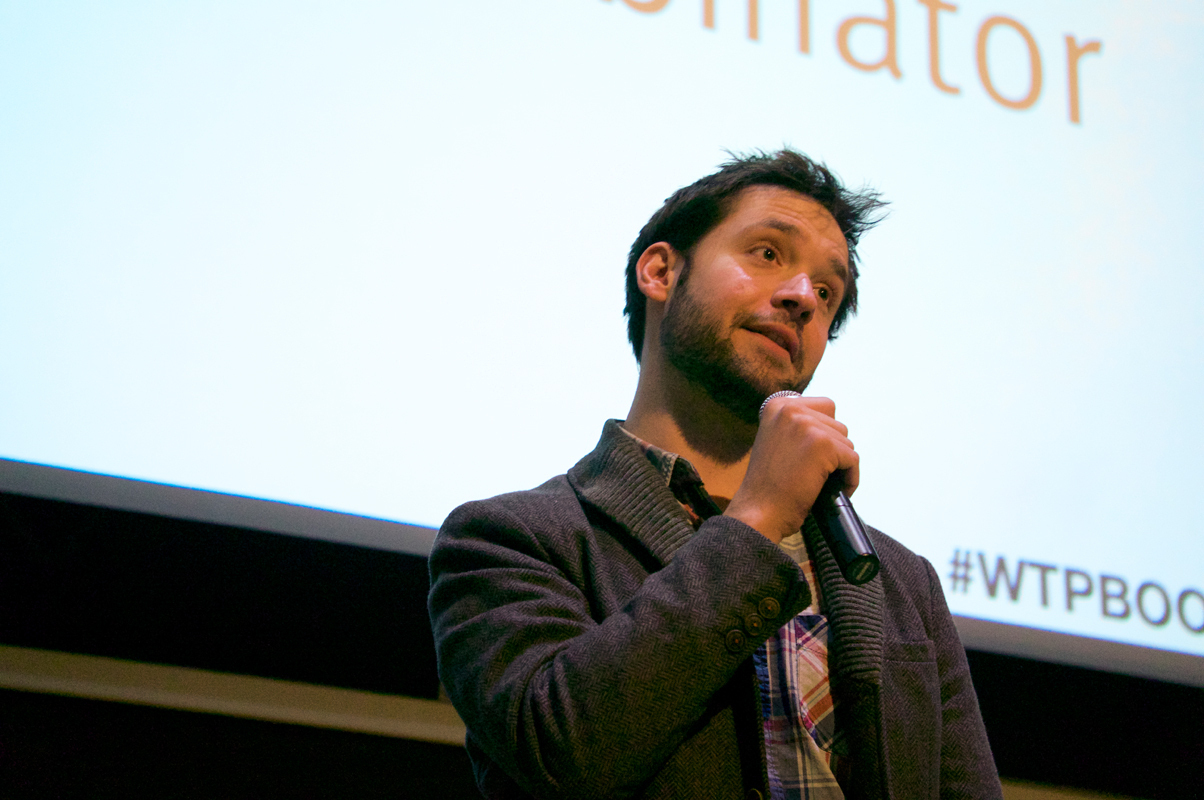 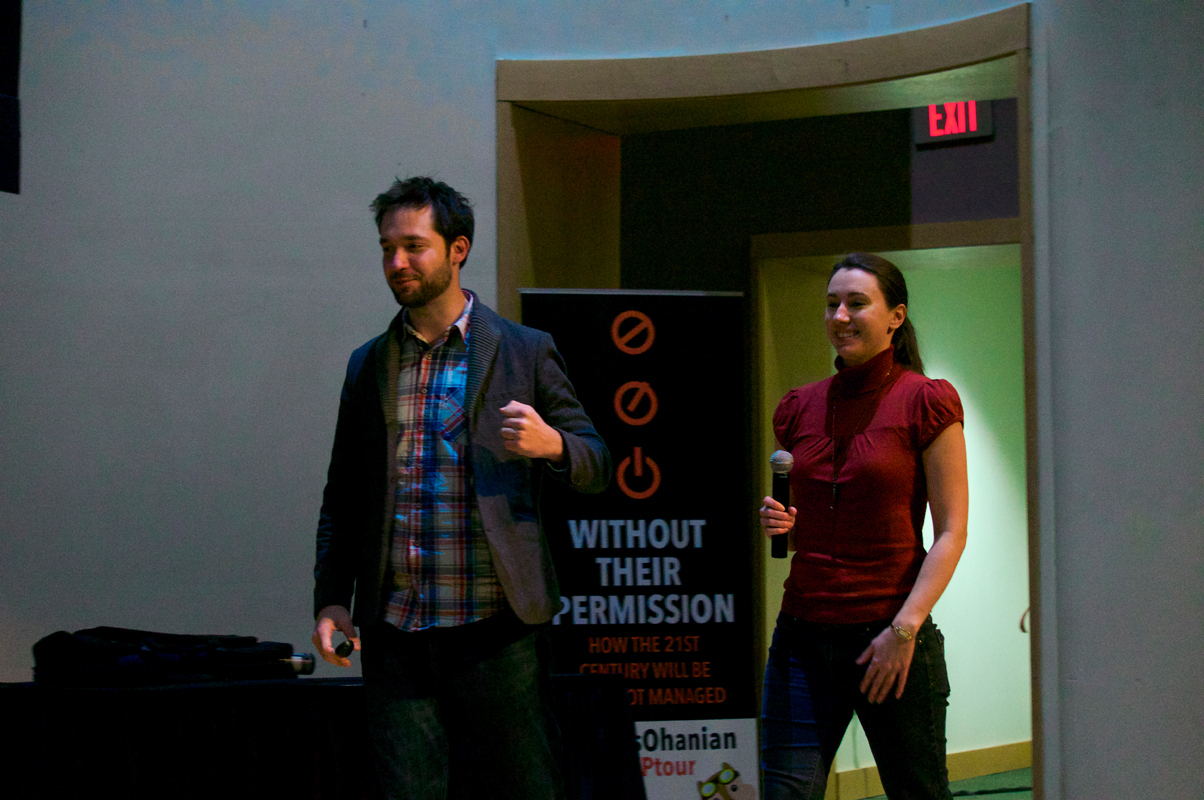 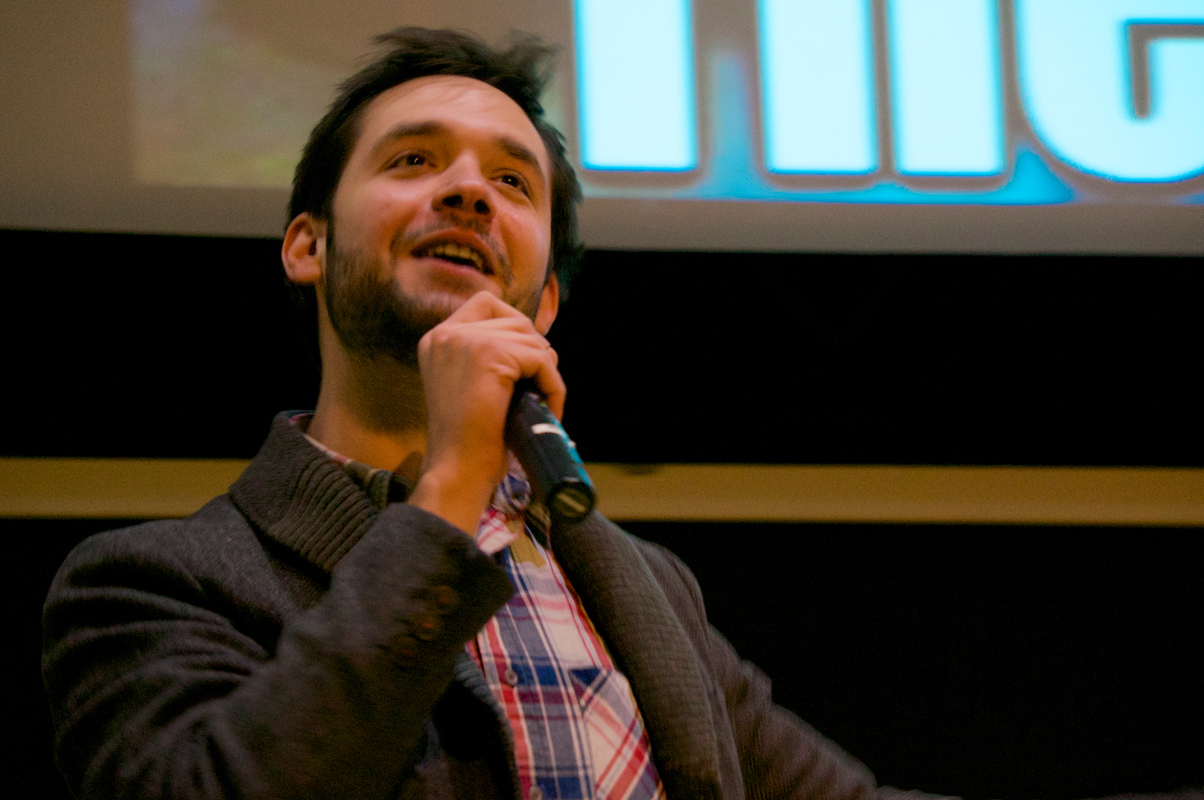 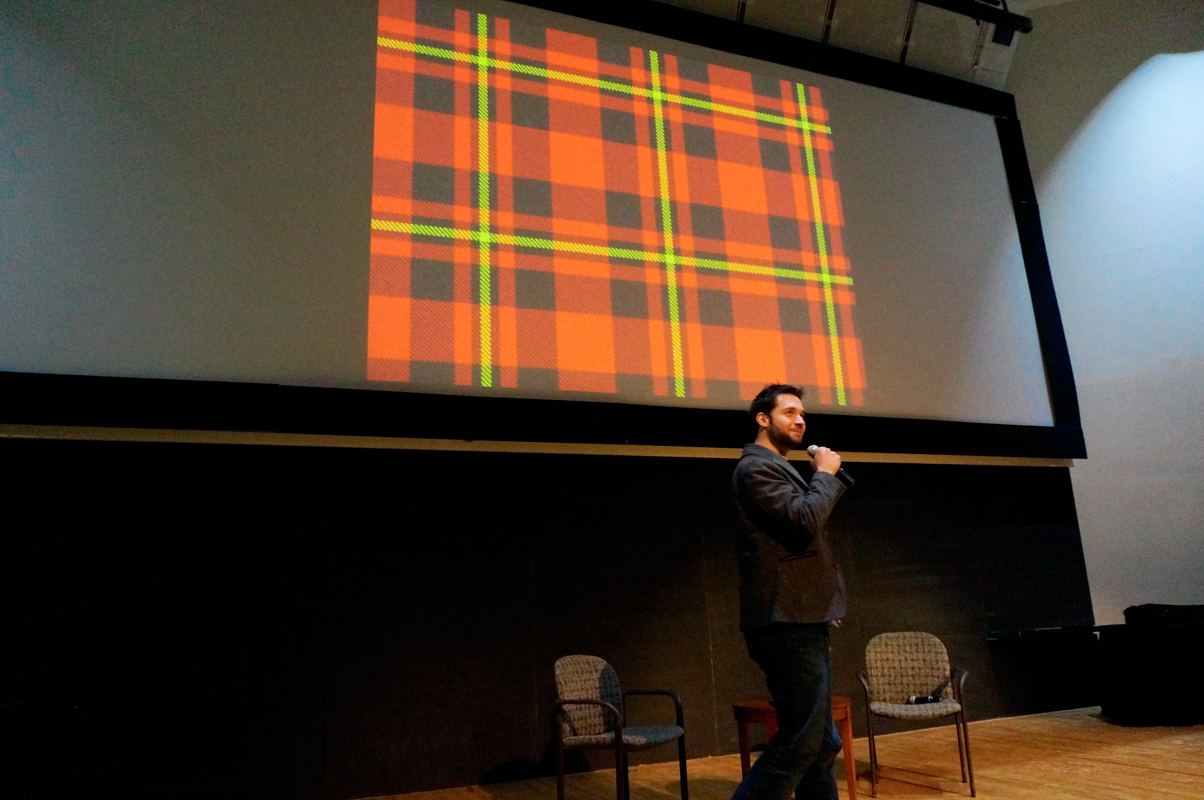 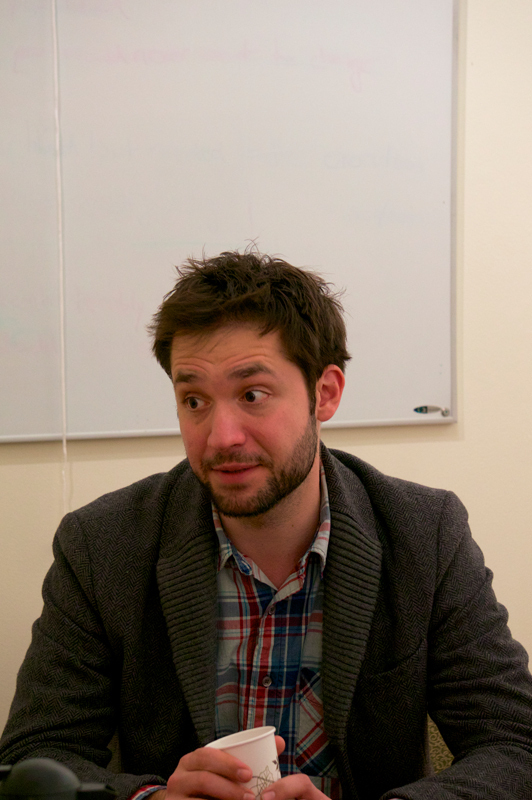 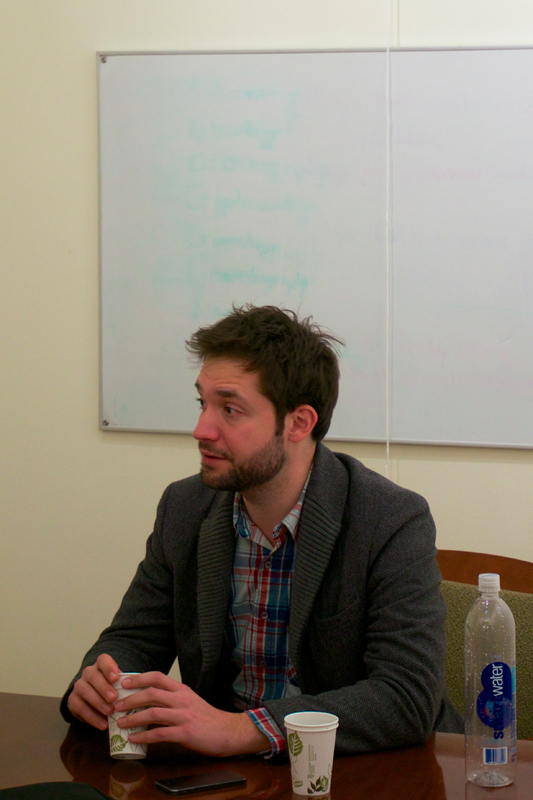 Reddit co-founder and open Internet activist Alexis Ohanian visited Carnegie Mellon on Tuesday on his tour promoting his new book, Without Their Permission: How the 21st Century Will Be Made, Not Managed. Ohanian sat down with The Tartan to talk about the tour, student entrepreneurship, and net neutrality.

The Tartan: You’ve done bus tours to protest SOPA/PIPA and now to promote your new book. Why opt for touring the country on a bus?

Alexis Ohanian: Yeah, it really doesn’t scale as well as the Internet does. One, it’s an excuse to get a bus and drive around the country with friends. And two, it’s a way to really meet and feed off of the energy that’s around all of these campuses and all of these cities where all of these start-ups are taking off and getting started.

I like to think that it’s also a more effective way to get the message out, especially to college students who I think don’t get to hear this stuff very often, and it’s the lecture at least I always wished I had when I was in school.

TT: What do you want college students to take away from your tour?

AO: I want them to get started building stuff and doing stuff and they don’t have to wait to graduate to do that, and those are the things — having ideas and doing them — that’s what entrepreneurship comes down to. That’s something that makes you not just a great founder who I want to invest in, but also a great employee or someone I want to work with.

TT: What do you say to someone from Carnegie Mellon who’s aspiring to start a company or run with an idea but has to consider student loan debt and other pressures and doesn’t want to risk it?

AO: Well, this is a real problem. There is a much bigger issue with student loan rates, the cost of tuition; those are some huge problems that need to be resolved. That’s a separate thing; that’s not really my forte. I can’t begrudge anyone who opts to get a job instead of creating one for themselves.

But, I always recommend these are the skills right now that are going to help you if you want to get a job. And let’s say you’re all worried about student-loan debt and you need to have steady income. That doesn’t have to be your everything. What I mean is, there are plenty of people who get paid educations by working at start-ups, or even by working at large companies like Google and Facebook where they can meet their co-founder there one day. They’re paying the bills, but I hope they’re also not depriving themselves of that side hustle, that thing you’re doing on nights and weekends, that passion project.

That’s the thing, whether it’s an Etsy store or whether it’s an iOS app, that’s the thing that can actually become something much bigger. And the risk — there’s almost no risk. In most of these cases there’s actually no cost, just time. Obviously different students have different amounts of freedom to invest that time, but once you’re fortunate enough to get that job, don’t starve that part of you that is still interested in making and doing things.

It’s not just a little hobby — I mean, it could be — but now it has the potential to be so much more. I’m not even just saying that your Etsy store has to turn you into the next Ralph Lauren. I don’t know if that analogy works. But even if it’s something that gives you satisfaction or keeps you making things and doing things and feeling great when some random person in Australia buys the thing you made. Maybe it is enough income to pay for the cable, and then it’s enough income to pay for the rent. Who knows?

At the very least, it’s nourishing this part of you, this passion, that I feel like most people historically would spend they’re entire lives putting off, until they could finally afford to do it. The generation before us and all previous ones were very well known for that kind of self-sacrifice, or at least just determination to take that career job and do what they really love later.

I think the one advantage to a failed — recovering, but a pretty broken — economy, and a lot of broken promises, is that we’ve pulled the veils from our eyes way earlier than most people do, and realize “Hey, you know what, maybe I should try do this thing that I really care about, and why not spend the time now during my best years to get into knitting, or coding, or swamp boat sailing.” And there’s this resource called the Internet that’s going to provide you with a stage and a library for all of those things. Literally all of those things have communities to learn and share with and from.

TT: How do you attempt to educate politicians and the layman who may be uninformed about the Internet and how certain types of legislation can affect it?

AO: Well, it’s a lot easier to convince uninformed people than it is to convince politicians. It turns out the Internet is this amazing resource for everyone who has access to it. The reason we did the documentary Silicon Prairie is because I wanted to show off the fact that, like, there’s a farmer in rural Missouri right now who’s getting 90 percent of his customers from the Internet, and he doesn’t even check his phone more than twice a week, three times a week. It’s not just hipsters in skinny jeans starting start-ups and college students getting help on term papers. Everyone is affected by it.

When you understand how rich the Internet economy is, how deep it runs, in so many aspects of society through so many people, it becomes really obvious. Like, can we imagine the United States without electricity? No, that would be pretty hard. Likewise, we can’t really imagine being without an open Internet. The cost would be so grave, so serious. The problem is these politicians have very, very big interests in being re-elected, and the money that gets them there is provided by people who don’t necessarily have the interest of the public in mind.

SOPA/PIPA was one where we triumphed. Net neutrality is one where we the people are definitely on the ropes. The Trans-Pacific Partnership continues to live around, which would be another big blow. There will continue to be threats. It’s not like, “Hey, we’re done." It’s, “Hey, we need to double down.” And so I think the way I’ve been able to convince the most people is just by telling stories, by sharing what’s happening in their neighborhood, by coming to events like this. Half of these events are at schools, but the other half are at co-working spaces, or we did a couple at small business luncheons. I will go anywhere people wanted to hear me on this tour, because people need to know. That’s people in power, and that’s also just citizens.

TT: What is your opinion on Sunday’s deal between Netflix and Comcast?

AO: Oh yeah. That makes me sad. It’s a sad precedent, especially in light of Comcast and Time Warner’s seemingly imminent merger — let’s hope antitrust gets in the way there.

I’m a Netflix shareholder, so I totally understand the value of Netflix making this deal. It makes total sense; they’re building a moat, it gives them a great relationship, and it’s going to mean better service for a significant amount of the market. The thing is, even as a Netflix shareholder, I don’t want Netflix to ever get complacent. I love House of Cards or Orange is the New Black, this stuff is amazing, but I want to know that, in a year, Netflix is going to be looking behind them, going, “S***.” Or maybe they won’t be paying attention. But I want there to be a hundred other companies trying to dethrone Netflix, to be the next Netflix, to be the better Netflix. Because that’s better for everyone.

I realize I’m basically saying this against my own self-interest as a shareholder, but that’s how innovation happens when there’s an even playing field for competition. Netflix has done a great job innovating, but I don’t ever want them to be complacent. So things like this worry me because it sets this precedent where maybe a few years from now there’s an upstart that can’t necessarily get going because they don’t have access to the same market or the same bandwidth.

TT: In an increasingly tech-based world, and coming out of the Great Recession, do you think we need more programmers, more coders, more technical people and increased technical education, or do we need more entrepreneurs and people who start things?

AO: I don’t think they’re mutually exclusive. To answer the first part, yes, we need more technical people. You know that Estonia, based largely on how successful Skype was, built by Estonian developers, that was a tenth of the entire country’s GDP when eBay bought it. That was like a decade ago, it was f****** Estonia, they were behind the Iron Curtain two decades earlier. They’re now pushing for K-12 education in computer science in public schools. They’ve gotten the message. They know how much value that can bring.

Obviously solving the education problem is big and complex, and there’s already so many failings, but coding is the new fluency. This is the most valuable skill of this century. If you want to be a founder of a company, and not even just a tech company, but like a founder of a company, because I’m telling you software is going to play a role. If you have things or are involved with things that turn on, it’s going to have code. And there are so many people — let’s pick on the historians — even as a historian, let’s say I ended up going the road of being a historian, just knowing some basic scripts, any kind of automation would have made me a 10 times better historian because I wouldn’t have to sit there changing every file name to “1234” and then “12345.” It can have a transformative value.

Now it’s a huge problem to solve. But what I guess is most exciting that there’s almost limitless demand right now for people in the economy who want this skill. And when you combine that with the fact that it’s also going to enable people to start creating things — and this goes with the entrepreneurship thing — it shouldn’t just be about having this new skill, it’s basically giving someone a skill that let’s them be their own wizard. Not just have ideas of something they want in the world, but actually have the ability to make it.

So I think everyone should learn how to code. Not everyone is going to end up being a founder of a company, but the skill of being entrepreneurial, having ideas and going through with them — that skill is so important. Everyone should be imbued with it. Because once you have that, once your brain has been wired for that, all these problems, obstacles, all these things start looking like things you can hack. Because you realize, “You know, I don’t actually know how to publish a book,” or, “I don’t actually know how to use Final Cut,” but you realize there’s a resource here, a vast resource full of amazing people who have done this, solved this problem, been along the way before that I can learn from.

TT: Thank you so much.