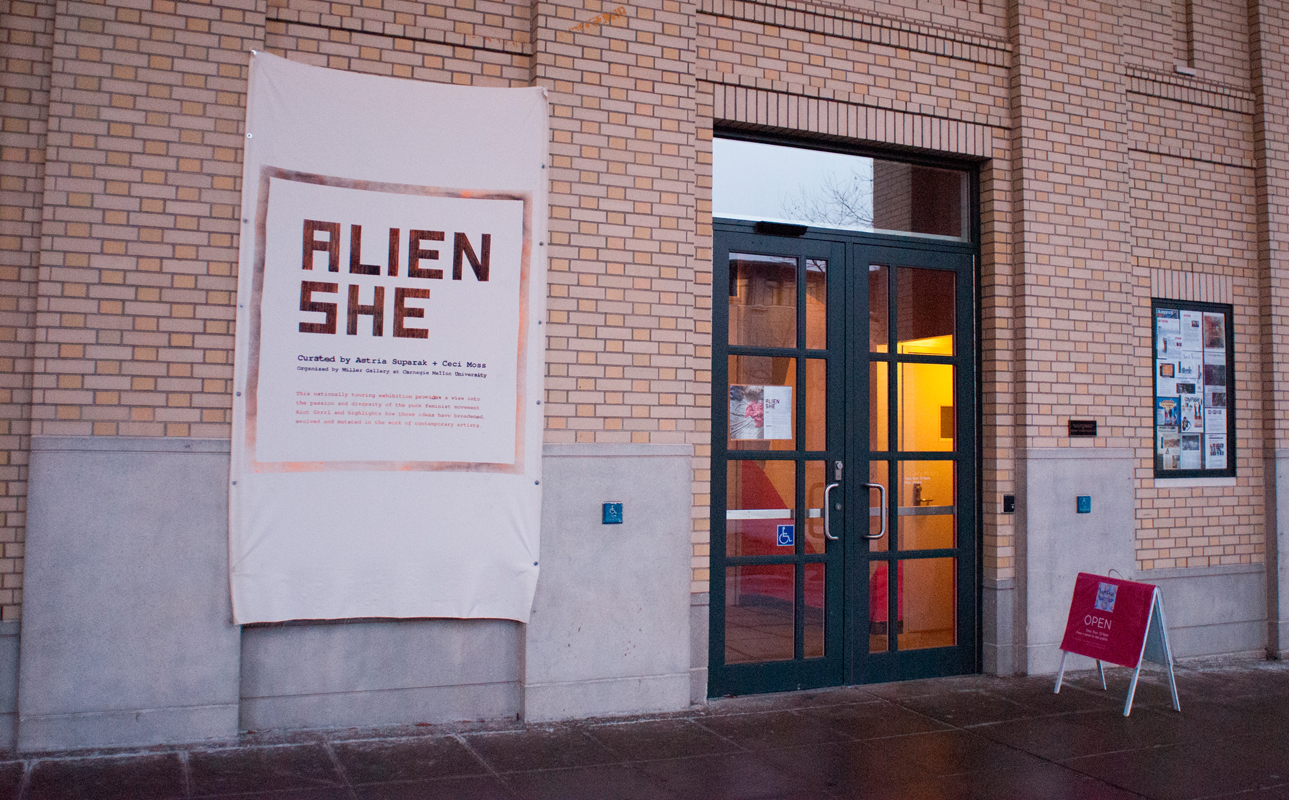 The Miller Gallery, housed in the Purnell Center for the Arts, will begin to focus more on the works of Carnegie Mellon artists after the university dismissed Astria Suparak, who had been curator of the Miller Gallery since 2008. (credit: Jonathan Leung/Photo Editor) 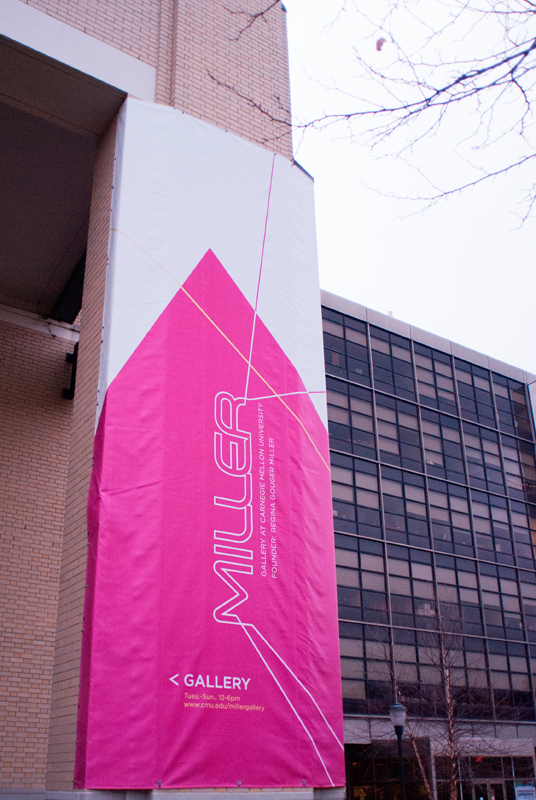 The Miller Gallery is currently displaying “Alien She,” a collection co-curated by Suparak and Ceci Moss. (credit: Jonathan Leung/Photo Editor)

Recently, Carnegie Mellon announced a series of impending changes for the on-campus Miller Gallery. Over winter break, the College of Fine Arts announced that the Miller Gallery will take on a more Carnegie Mellon-centric approach, exhibiting art “across arts disciplines at the university,” according to a statement from the office of the College of Fine Arts.

When the changes to the Miller Gallery were announced, it was also announced that curator Astria Suparak would be dismissed after six years at the Miller Gallery. The university did not comment on the reason for Suparak’s dismissal.

In a letter sent to her colleagues after her dismissal, Astria wrote that during her time as curator she “sought to create a coherent, socially-engaged program of exhibition, one which would establish the Miller Gallery as distinct among the other outstanding arts organizations in Pittsburgh.”

The Miller Gallery was founded by Regina Gouge Miller in 2000 and “supports experimentation that expands the notions of art and culture, providing a forum for engaged conversations about creativity and innovation. The gallery produces exhibitions, projects, events, and publications with a focus on social issues, and is free and open to the public,” according to the mission statement on its website.

Suparak oversaw 26 exhibitions and 98 public events. She wrote that “Drawing on our position as a gallery within a research university, we strived to present thought-provoking, interdisciplinary exhibitions and programming that expand the notions of art and culture, creating an open, pedagogical space where students, faculty, and the wider public could interact, share experiences, converse, and learn.”

There have been mixed reactions to the changes to the Miller Gallery. Elaine King, professor of the history of art and theory, and museum studies in the College of Fine Arts, says that the Miller Gallery is undergoing a “transition period.”

King said in an interview that the news came as a shock to many. “No one knew anything until we got a memo — an email — everybody was surprised.... Perhaps people are responding so dramatically because it was so abrupt, so sudden,” King said.

King said that the Miller Gallery had a focus too narrow for Carnegie Mellon’s diverse demographic. “People felt that all the shows were under a singular, particular ideology that could be summed up as ‘social critique.’ ”

King felt that it is difficult to say whether the changes to the Miller Gallery will have a positive or negative effect on Carnegie Mellon and the gallery’s role within the university. “I would give the benefit of the doubt,” she said. “I don’t see change as necessarily negative; I see it as a time to re-evaluate.”

Sylvia Rhor, an associate professor of art and art history at Carlow University, disagreed that the exhibitions that Suparak curated and brought to the Miller Gallery were narrow in scope.

“I think there’s a great diversity of content, even of strategy. She really worked quite hard to get a lot of programming. I was impressed with the breadth, really, rather than the narrow scope,” Rhor said.

Rhor, who used to bring her students to the Miller Gallery, thinks that Suparak’s dismissal was a mistake on the part of Carnegie Mellon. “I think she was exceptional; she put the Miller Gallery on the map. I would not have gone — I didn’t go — before her shows really started to draw attention, national attention. It was actually excellent, for me — for promoting critical thinking in class.”

“Her curatorial strategy is the most cutting edge in the city,” Rhor continued. “It’s really an unconscionable error. I think it’s actually something that frankly doesn’t just affect CMU but the city as a whole.”

According to an Oct. 27, 2007 column for syracuse.com, university officials did not comment on Suparak’s dismissal and “in that void, angry members of the arts community contend that Suparak was let go for reasons from censorship to institutional jealousy at her success.”

A 2008 article in the Pittsburgh City Paper, written when Suparak was hired at Carnegie Mellon, said that Suparak “became a cause celebre when she was fired by Syracuse University.”

Suparak herself wrote in a farewell post on Dec. 6, 2007 that “I recognize that my situation has touched upon critical issues of creative and academic freedom, institutional transparency, effective civic engagement, and the support for emerging visions and artists.”

Hyla Willis (CFA ‘99), an associate professor of media arts at Robert Morris University, has worked closely with Suparak in the past and thinks that Suparak was a valuable asset to the city of Pittsburgh.

“Carnegie Mellon is a university in the context of Pittsburgh, so right next door you have this fantastic Carnegie Museum of Art, you have the Warhol Museum, you have the Frick Museum, you have Phipps [Conservatory], all these resources that are just at the fingertips of students,” Willis said. “But there are very few places in town where students can look at what’s possible to do with curating. It really feels to me like Astria filled a niche that was missing in Pittsburgh.”

“I guess I would say it was a shock. I don’t really know if it was a mistake or not. I know that a lot of the other students working there think it was a disappointment for sure,” Mallonee said. “As far as her personal work ethic goes, I think it might’ve been a mistake.”

According to the statement from the College of Fine Arts Dean’s Office, future programming at the Miller Gallery will be determined by an interdisciplinary panel. “A faculty leadership committee, chaired by the Associate Dean for Interdisciplinary Initiatives and representing the five CFA schools of Art, Architecture, Design, Music and Drama, and other relevant academic units, will determine programming,” the statement says.

The statement says that “This new direction for Miller Gallery provides opportunities for fresh and diverse perspectives articulated through the prism of varied creative and research interests. This is indicative of Carnegie Mellon’s ability to provide a rich, reflective hybrid experience for our students and to present new ideas and creative propositions to a general audience.”

“Alien She,” co-curated by Suparak and Ceci Moss, will remain at the gallery until Feb. 16, when it will go on national tour.