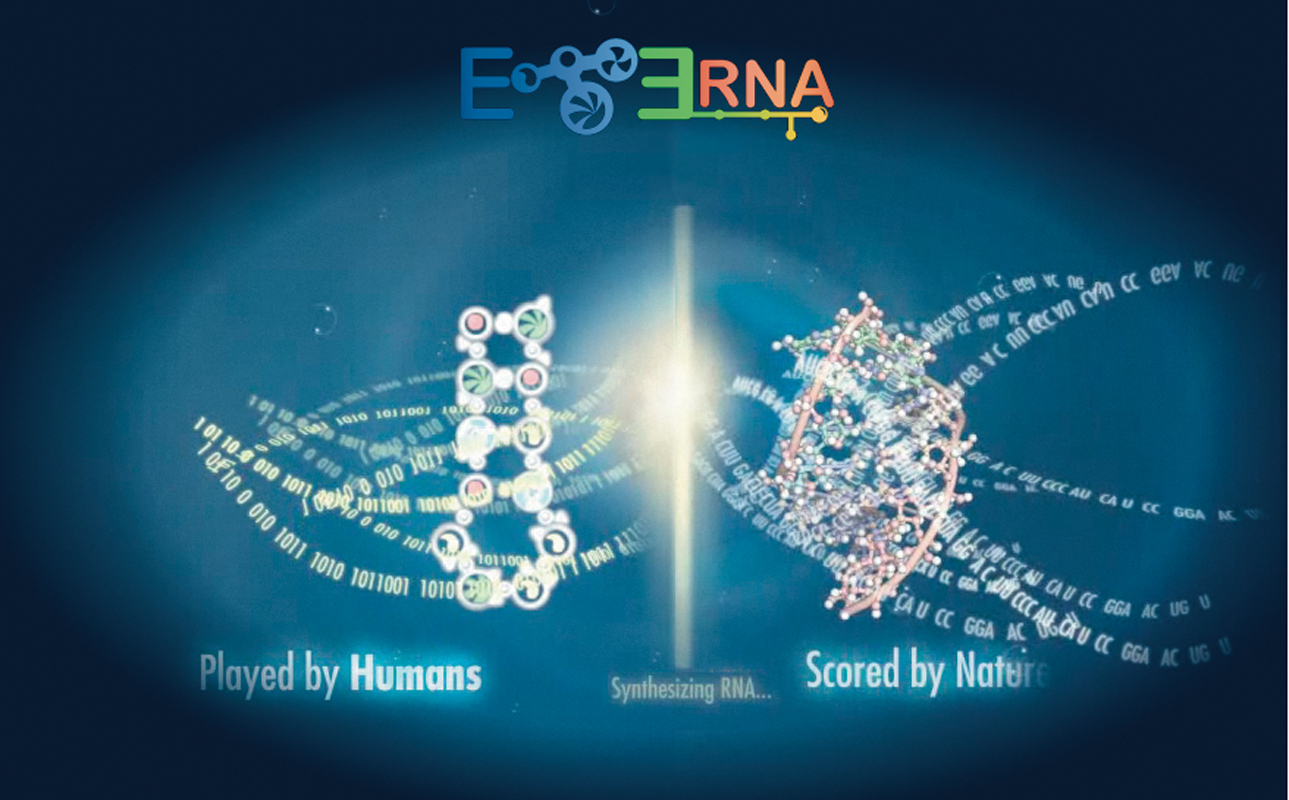 Nature at the molecular level can be described as having beautiful complexity. In the fabric of space and time, molecules come together to form structures and chemical interactions that are fundamental for life. Understanding and recreating this complexity has baffled scientists for decades. To tackle this problem, a team at Carnegie Mellon University has created EteRNA, a computer game that enables players around the world to construct novel and robust RNA sequences that could potentially be utilized in biological experiments.

RNA is a mysterious molecule, and has more secrets than its better known counterpart, DNA. Unlike DNA, which has a rigid double helix structure, RNA can be very variable in shape and size. It has the ability to store information in its bases, as well as to fold into specific shapes that allow it to carry out a multitude of functions at the molecular level. This variability can make it very complicated for scientists to simulate and mimic nature’s complicated RNA designs.

EteRNA, which launched in January 2011, is an online computer game that aims to build new sequences of RNA. Developed by a team of students and faculty at Carnegie Mellon and led by professor of computer science and robotics Adrien Treuille and doctoral student in computer science Jeehyung Lee, EteRNA has come to life with a current community of over 130,000 members.

Lee explained that the RNA design problem is “not just computationally hard,” but that “the simulation model is incomplete and there is just no current way to simulate RNA design.” Before EteRNA, RNA design had been left to researchers repeatedly trying various designs in the lab.

Certain sequences are more robust or stable at the molecular level. The challenge lies in determining what guidelines or rules can be followed to contribute to this stability while also performing the desired function.

In the game, players start with a basic foundation for an RNA molecule and then make a series of decisions and additions to build a molecule. Players can challenge each other to build more stable structures. When asked how much biological experience players needed to play EteRNA, Lee replied, “none.”

“Over 90 percent of our top players don’t have any previous biological background,” Lee said.

When the game first launched, Lee and Treullie recruited about 100–200 players. Lee shared that the players initially struggled with building good RNA designs. However, improvements in the game and players’ intuition lead to the design of robot RNAs. After it was discussed in The New York Times, the game gained over 30,000 members in the following month.

Lee exclaimed that they are actively “turning players into RNA scientists.” He added that players find the game to be “an entertaining environment and enjoyable experience.”

RNA sequences that are designed through the game are then sent to Dr. Rhiju Das, an assistant professor of biochemistry at Stanford University who builds these RNAs in the lab and preforms tests to determine their stability.

Initially, the project’s main goal was simply to build robust RNA molecules. Then the team increased their focus to figuring out what general design rules they could determine from stable RNA designs. Lee believes that, maybe one day in the distant future, we will be able to use these rules to create computer simulations that can create RNA structures. However, the ability to create these structures remains a challenge since it is hard to document all of a player’s decisions in creating these molecules.

The current goal is to evolve the project into an online community where RNA scientists from around the world can post their research problems and desired goals for a potential RNA.

Then, if players deem the project worthy, they can work with the researcher to design RNAs that fit the requirements. The structures that players determine will actually be synthesized at Stanford University.

This type of collaboration can foster advancement in RNA research. RNA has potential medical implications where scientists can design RNAs to carry out specific function-altering molecular interactions that play important roles in disease.
Lee hopes that they will move from a 2-D to a 3-D interface to improve the user experience.