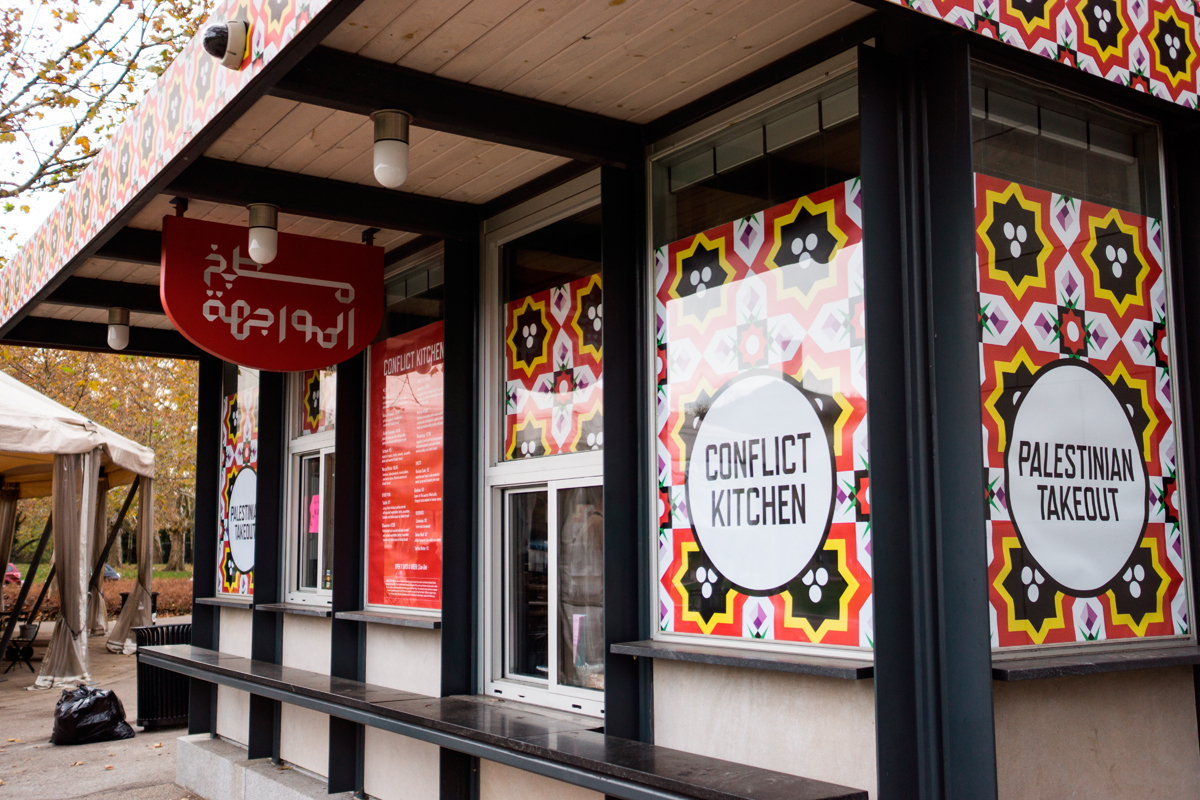 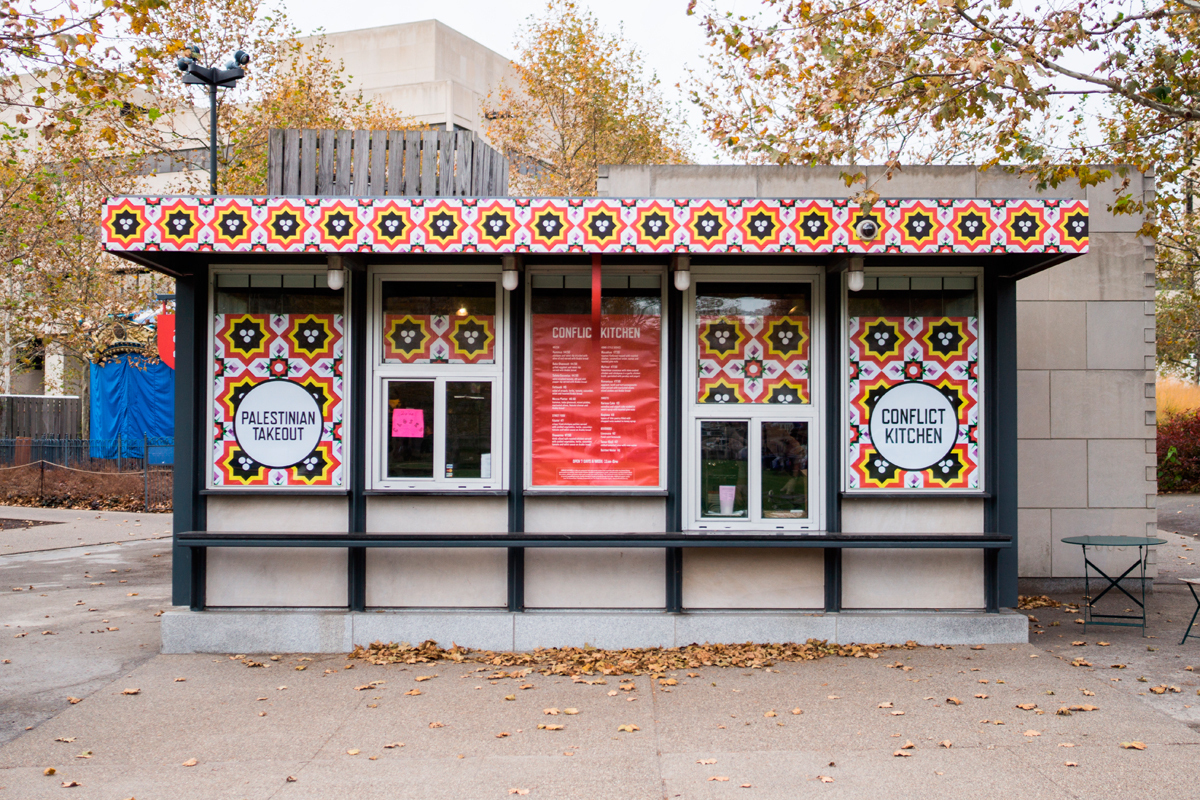 The concept for Jon Rubin and Dawn Weleski’s restaurant was simple: manage a restaurant at which Pittsburgh residents can purchase cuisine from a country with which the United States is in conflict. Rubin and Weleski, an assistant professor of art at Carnegie Mellon and alumna (CFA ’10), respectively, working together were surprised when their first five “iterations” of the restaurant did not spur the conversation that they were hoping for.

But, upon opening their latest iteration, inspired by the people and culture of Palestine, they saw a conversation of a different kind begin.

Over the summer and the past few months, the conflict with Palestine has received hours of air time and spilled over into the Pittsburgh community. “The interesting thing is that 90 percent of the reactions that we’ve heard — phone calls, emails, and comments from both Pittsburgh and the national community — have been positive,” Weleski said. That does, however, leave a percentage of the public unsatisfied with the Palestinian theme.

Included in that unsatisfied population are senior chemistry major Danielle Schleslinger and sophomore chemical engineering and creative writing double major Naomi Sternstein, members of Tartans 4 Israel, the Israel advocacy group on Carnegie Mellon’s campus. Schlesinger and Sternstein became concerned not when they heard about the new theme, but when they heard about some of the events that Conflict Kitchen has been hosting during the “Lunch Hours,” which include guest speakers and informative presentations.

“[Jewish students in Tartans 4 Israel] are not upset with their choice to feature Palestinian food, but rather that they aren’t giving an opportunity in their programming for other voices to be heard,” Schleslinger said.

University of Pittsburgh Chinese and political science major Lauren Barney attended one specific panel that made her feel “unsafe.” “My questions were being twisted, double standards were created, and people were yelling out at me. I felt uncomfortable and unsafe in that environment,” Barney said. “It lost the essence of why we were all there.”

“We identify as citizens of Pittsburgh and as artists. For us as citizens, we are interested in highlighting and trying to reveal a voice that isn’t given a forum. We could’ve had opposing voices all along for all of the countries [that we’ve featured in our iterations]. Palestine has been recognized by some countries in the world as a nation-state, and its citizens deserve to be represented,” Weleski continued. “Not the government, not these organizations that are creating conflict, but the people. We start with food, then we go to their everyday lives. And everyone has different lives and different experiences.”

In the past few weeks, many media organizations have featured the restaurant in a negative light, criticizing the organization for being anti-Israeli, biased, and anti-American. Despite the negative reactions, however, Weleski insists that the majority of feedback is positive and that they are fulfilling the mission.

“The project provides multiple levels of engagement to the community, and it’s very important to us that we let the public decide how they’re going to interact with us. And if certain communities want to provide a counter-discussion — not a counter argument, but a discussion — that’s fine. We want to encourage dialogue, not a fight. We want them to fulfill their mission, and we want to fulfill ours,” Weleski said.

A counter-discussion is in the works for Tartans 4 Israel through a project they’ve dubbed the “Co-Existence Kitchen.” Essentially a mobile, pop-up version of the original idea, Co-Existence Kitchen will feature food from all around the Middle East. Instead of providing what Tartans 4 Israel considers “passive programming” through the pamphlets of information that Conflict Kitchen includes with the meal, they will be “engaging the audience with trivia questions,” according to Sternstein, president of Tartans 4 Israel.

“There’s such a greater conversation to have about this issue. We want to share that,” Sternstein said.

Electrical and computer engineering Ph.D candidate Ahmad Khairi, who is from Palestine, said “I think it’s heart warming to see the Palestinian culture represented through food in Pittsburgh....I think that’s a great approach, in response to all the dehumanization main stream media does to such parties.”

“Conflict Kitchen has chosen to focus on the Palestinian story, and ... it has a right to do so,” Siriana Abboud, a junior psychology and French double major and president of the Arab Students Organization, said via email. “It’s unfortunate that Palestine has become interchangeable with Palestinian-Israeli conflict. All of this contention is overshadowing the fact that Palestinian life exists out of the conflict and that there is a culture that is being lost because of it,” Abboud said.

At the end of the day, Weleski said, “United States’ national interests align with Israel, and this isn’t a project where we present countries that we’re not in conflict with…. We’re not about to change our mission to please a certain group of people both in Pittsburgh and nationally.”