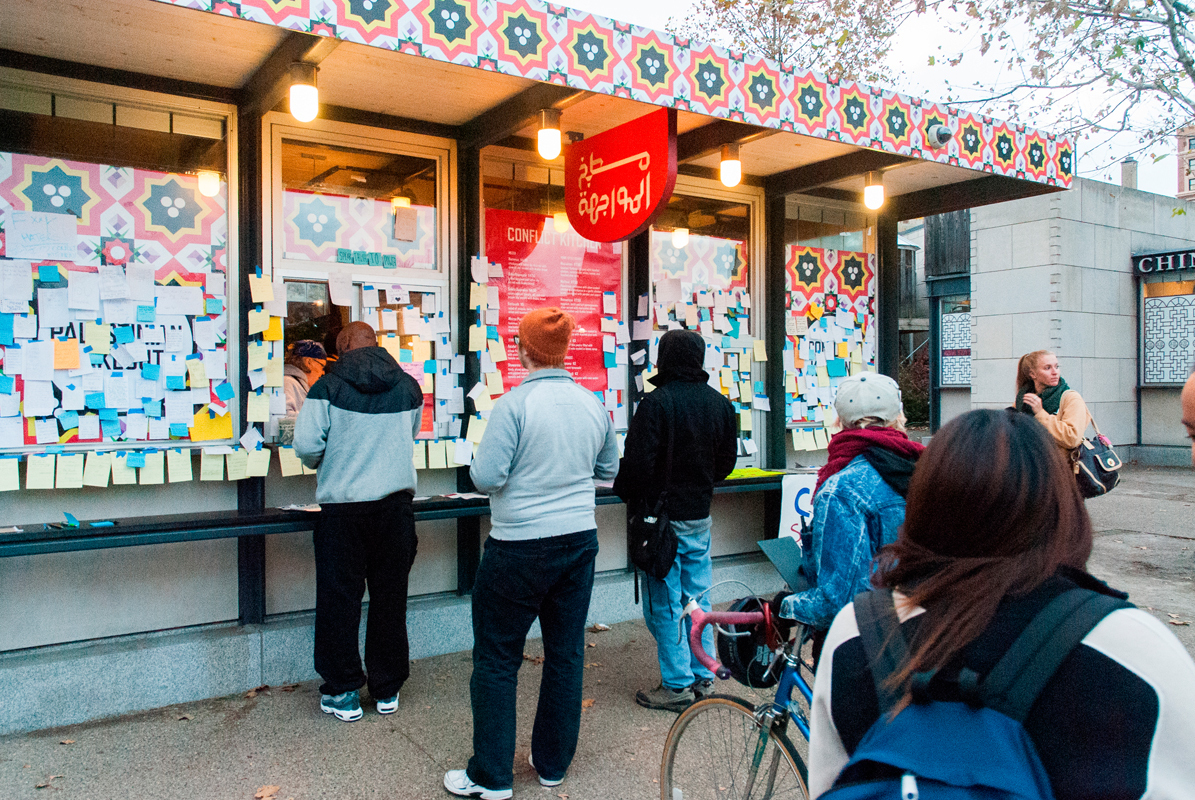 Conflict Kitchen, which closed after receiving a letter containing death threats, reopened last week with support from organizations like the University of Pittsburgh’s Students for Justice in Palestine, which staged a sit-in in support of the restaurant. (credit: Justin McGown/)

Despite gray skies and near-freezing weather for most of the day, Conflict Kitchen’s reopening last Wednesday — after it closed due to a recent letter containing death threats — was met with all-day traffic and enthusiastic support. On the day of the reopening, a line stretched from the counter to the edge of Schenley Plaza, accompanied by a visible police presence. The restaurant, which aims to promote cross-cultural understanding, currently offers a menu of authentic Palestinian street food.

Conflict Kitchen attracted local and international media attention as a result of controversial statements printed on pamphlets distributed along with meals at the counter. The pamphlets contain a collection of quotes from Palestinians both locally, in the U.S., and in the Middle East on subjects related to general American perceptions of life in Palestine. The quotes, some Carnegie Mellon students and media outlets said, are anti-Israel.

Conflict Kitchen received a death threat the week before last, causing the restaurant to temporarily close. In the meantime, the University of Pittsburgh’s chapter of Students for Justice in Palestine organized a series of sit-ins.

Students met for an hour Nov. 10–12 and showed support for Conflict Kitchen’s goal of spurring dialogue and understanding about the current Palestine-Israel conflict. They left numerous messages of encouragement and support for Conflict Kitchen — both as a concept and as an establishment — attached to the front of the store, which were still there during the reopening.

Culinary Director of Conflict Kitchen Robert Sayre said that the reopening had good energy, and that they saw the same number of customers as on a peak day despite the inclement weather.
“Obviously [receiving the death threat] was not a pleasant experience,” Sayre said, “But the community response does make you feel a bit blessed.”

Sayre continued to say that he was very pleased by the showing of support and the help provided by the University of Pittsburgh Police Department.

Michael Moody, one of the patrons standing in line to order at Conflict Kitchen, had dual motivations for braving the cold weather.

“I haven’t tried the Palestinian food yet,” he said. “And I wanted to make sure they know people [are] interested.”

“Regardless of any bias, they’re personal statements,” Moody said of the quotes on the Conflict Kitchen materials and the reaction they have provoked. Moody felt that Conflict Kitchen was intended to give voice to people whose voices were generally not heard by the public more than to support one side over the other. “It’s a shame people don’t appreciate its purpose,” he said.

Another patron the day of the reopening was Anna Rosati, a sophomore drama design and production major, who was quickly finishing her order before it grew cold in the near freezing air.

“I think Conflict Kitchen is an important thing with a really great intent,” Rosati said, feeling it was a worthwhile goal to help people understand other places as other cultures, not governments. “All you hear is what our government and theirs are doing.”

Rosati stressed the importance of understanding that while governments are interacting with each other, individuals and societies are not necessarily the same thing as their governing bodies.
She expressed dismay, but not surprise at the death threats. “In anything there are going to be extremists who take what they learn and apply [it] in a narrow way.”

Despite the death threats, Conflict Kitchen’s first day back turned out to be quite a success.

However, Conflict Kitchen may likely remain at the center of discussions for some time yet. Tartans 4 Israel, described as a “Zionist group” by the Hillel Jewish University Center website, will be hosting a “Co-Existence Kitchen” on Nov. 19 in reaction to the perceived anti-Israeli sentiment of Conflict Kitchen.