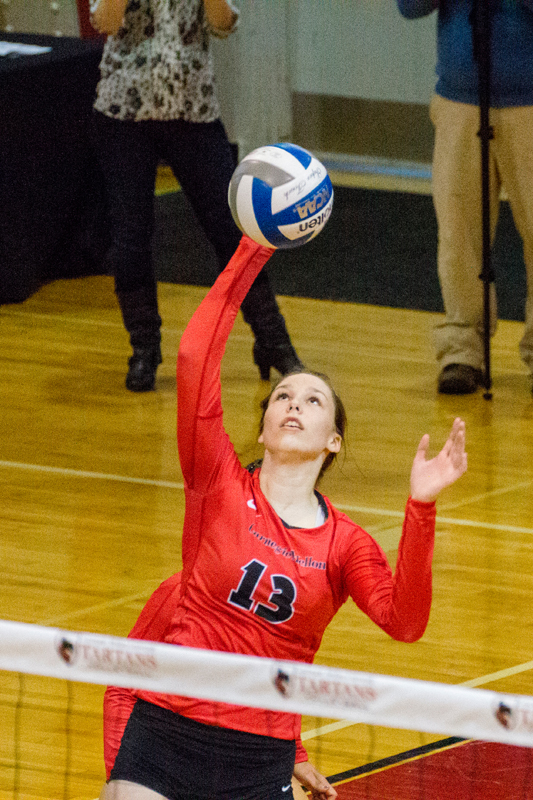 The weekend started off with a suspenseful series of matches in the UAA volleyball championships on Friday.

Carnegie Mellon’s women’s team got off to a strong start after defeating its first opponent, New York University (NYU), 3–0. During the first set, Carnegie Mellon successfully stayed ahead of the opposing side amid serving errors, attack errors, and other penalties. First-year outside hitter, Heather Holton, was responsible for seven of Carnegie Mellon’s kills and had earned the most points that way on the team.

During the second set, Carnegie Mellon seemingly started off on a weak foot, with NYU ahead by two points due to attack errors by the Tartans and kills from NYU.
However, this underdog status did not last long, as Carnegie Mellon slowly caught up, with Holton smashing a non-redeemable hit and NYU making another service error. NYU maneuvered themselves another step, but a kill made by senior right side hitter Ali Celentano and an unfortunate attack error on NYU’s side caused them to wallow in temporary defeat.

Eventually, both sides were tied 6–6, but from that point on, the numbers on NYU’s scoreboard took a ride downhill until the end of that round, with sophomore setter and opposite hitter Emily Newton making the winning kill for that round. In the third set, a series of penalties on NYU’s side granted four consecutive points to the Tartans after two initial kills were made by sophomore middle blocker Jackie Gibbons and first-year middle blocker Eliza Donohue. This set ended with NYU losing to Carnegie Mellon 23–1 during which Carnegie Mellon players Holton, Celentano, Gibbons, and Donohue scored three points each, making the majority of the team’s points.

At this point, Carnegie Mellon’s first match in the UAA had ended and the team secured its position to face their next opponent: No. 6 Emory University.

This game, though it started out hopeful, did not finish as it had started.

Though the match started with Holton making two kills on the first three points, Emory followed up with two consecutive points.

Gibbons would have been able to keep up the game for the Tartans if she had landed the ball within the boundary on Emory’s side.

Holton, who had excelled in the first game, seemed to be on the verge of losing her winning streak, since she made more out-of-bounds hits even though she also scored three times.

In the second set, Emory started getting ahead of the game after both sides scored three points.

With Emory leading 11–4, it appeared that the visiting team’s players made more ruthless shots, as can be observed from Donohue failing to block a hit. However, Donohue redeemed her position by blocking the very next shot, earning Carnegie Mellon a point.

After that, it seemed that most of Emory’s points were gained from Carnegie Mellon’s service and attack errors. These errors occurred in five consecutive shots, as Emory increased their score from four to five while Carnegie Mellon stayed at three. This happened again later in the set when Emory went from 19 to 21 and the Tartans maintained nine points.

In the third set, however, the Tartans scored consecutive shots, first starting from a service by Emory, followed by kills from Gibbons and sophomore middle blocker and outside hitter Casey Salandra. The biggest triumph during that set was probably the point made after those shots. Celetano served a ball that could not be returned, putting Carnegie Mellon in a tie at 10–10. More consecutive shots were made as Salandra and Newton smashed shots that were faster than the receiving opponent’s reflexes. However, the points were not enough to triumph in the end, and the final score was 25–20, Emory.

Though the ladies had a promising start and fought long and hard, they did not progress to the next challenge in the UAA Championship matches. However, they did receive an opportunity to play against Washington University in the third place match.

Carnegie Mellon finished in fourth after dropping to No. 5 Washington University in straight sets.