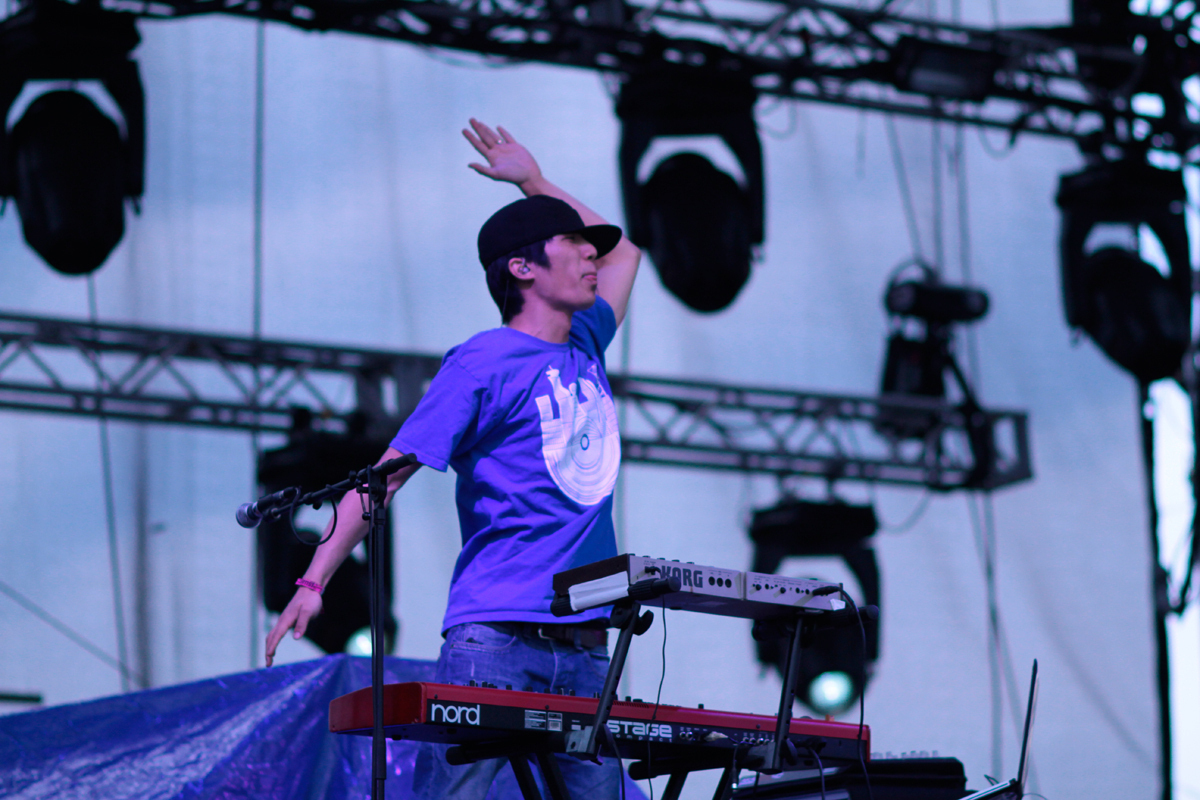 To an outsider, the life of a professional musician can seem like easy street. You sit around and come up with songs, then go play said songs before stadiums of screaming fans on tours that typically last one calendar season — two if you’re big in Japan. This dream may be true in some cases — Tiesto, Justin Bieber; I’m looking at you — but for most musicians it’s a constant stream of session gigs, long treks back and forth across middle America in a Dodge Ram, and impassioned performances in half-empty clubs.

Borahm Lee and Adam Deitch, who together comprise the electronic hip-hop duo Break Science and who played a spectacular show to a small crowd at Mr. Smalls Funhouse on Thursday, are two artists who embody that determined spirit. Both have toured and worked with countless other artists, including Pretty Lights, The Fugees,Talib Kweli, and 50 Cent. Deitch, an accomplished drummer and graduate of the Berklee School of Music, was making his second stop at Mr. Small’s in two weeks; he was here with funk outfit Lettuce on Oct. 22.

Break Science’s live show combines producing and keyboards from Lee with drums from Deitch. The addition of the live drums gives their sound much more weight than that of many other electronic producers, and injects their performances with a powerful energy. Possibly nowhere was this more apparent than on the duo’s opening song, the lumbering “Forest of Illumination” off of their 2012 Monolith Code EP. From amidst an ocean of ethereal voices and bright keys, Deitch’s steady smack of the snare drum broke through, signaling that the night was off and running.

Deitch was mesmerizing to watch, seeing as he’s a player who treats the drums as a lead instrument. He employed a diverse spectrum of beats and drumming techniques, hitting every piece of his immense kit at least once during every song. Lee did what he could from behind the laptops and keyboards, jumping up and down and mouthing along to the samples.

The group touched on a number of their high-energy bangers during the show, including an energetic main-set closer of “Who Got It” from their 2013 album Seven Bridges and their recent viral smash “Vibe Walk,” a mash-up of “B*tch Don’t Kill My Vibe” by Kendrick Lamar and Tycho’s “A Walk.”

The Thursday night turnout was small — there appeared to be perhaps 100 people in attendance — but the group did not act like it. New material was premiered and familiar tunes, such as “Now You Want More,” were given new life with extended jam sessions — which is exciting, seeing as improvisation wasn’t a feature of the Break Science live show up until now.
Last Thursday’s show was part of the 18-date “Break Thru” tour, which features electro-soul producer Manic Focus and psychic trap artist Space Jesus as openers. The addition of Manic Focus is particularly noteworthy, seeing as he and Break Science have been working on a collaborative project titled “Manic Science.” The project has thus spawned one single, “You Gotta Move,” and a full-length is reportedly in the works. Attendees to Thursday’s show, and likely those to many other stops on the tour, were given a peek at what is in the works when Manic Focus was brought on stage for the last few songs. The group tore through a host of unreleased material, including an energetic remix of Pretty Lights’ “I Can See It In Your Face” and a powerful mash-up and cover of Busta Rhymes’s “Got You in Check” and 50 Cent’s “In Da Club.” Manic Focus especially seemed to be enjoying every minute of it, grooving and twisting behind the decks like an excited fan.