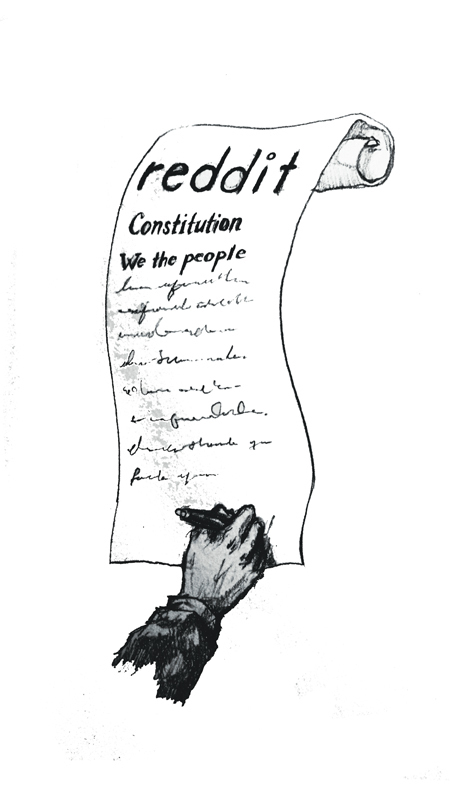 During the celebrity phone hacking scandal, a small community on Reddit was the main aggregator of stolen photographs. Many called for Reddit to remove the material and close the community. In response, Reddit released a statement titled “EVERY MAN IS RESPONSILBLE FOR HIS OWN SOUL,” in which the company described itself as a government rather than just a “company running a website,’’ with the distinguishing factor being that a government “exercises restraint in the usage of its powers.” Pugwash decided to tackle this issue by discussing whether or not online communities can self-regulate.

Reddit is an entertainment and news community-based website. Anyone can start a community, called a subreddit, which has its own page and followers. Subreddits are moderated by members of the subreddit, rather than employees of Reddit. In other words, they are self-regulated. Popular subreddits include music, pictures, gaming, and movies. The employees of Reddit do not remove content unless required by law to do so. This means that many unpleasant communities also call Reddit their home.

From the start, everyone at Pugwash agreed that those responsible for acquiring and sharing the celebrity photographs were in the wrong. They had done something that was not only probably illegal, but also ethically unsound. However, some argued that although online communities that self-regulate can host unpleasant communities, they are also home to important discussions on issues such as the Stop Online Piracy Act (SOPA), net neutrality, mass surveillance, and the Comcast and Time Warner Cable merger. If these companies did regulate, then important discussions may be censored.

Throughout the discussion, we used physical analogies to better understand what was happening. For example, one member described Reddit as being like an organization that opens a park in which anyone can do whatever they want. In this analogy, it would seem strange to blame the organization for what people do inside the park. Instead, it would seem logical that we should blame the people themselves.

We then moved our discussion from bad communities on Reddit to bullying on Twitter. One could argue that Reddit is quite easy to moderate due to the centralized communities. Twitter, on the other hand, is much more decentralized and thus impossible to moderate. Bullying is rampant on Twitter. For example, Anita Sarkeesian, a feminist, was the target of a cyber mob who attacked her through social media outlets, including Twitter. The attacks, although only online, were incredibly painful and violent, and the perpetrators went unpunished. Sarkeesian is not a special case. Many people, not only the rich and famous, are cyberbullied, and rarely is anything done in response. Those at the meeting agreed that this was a serious issue but did not have any suggestions on how to solve it.