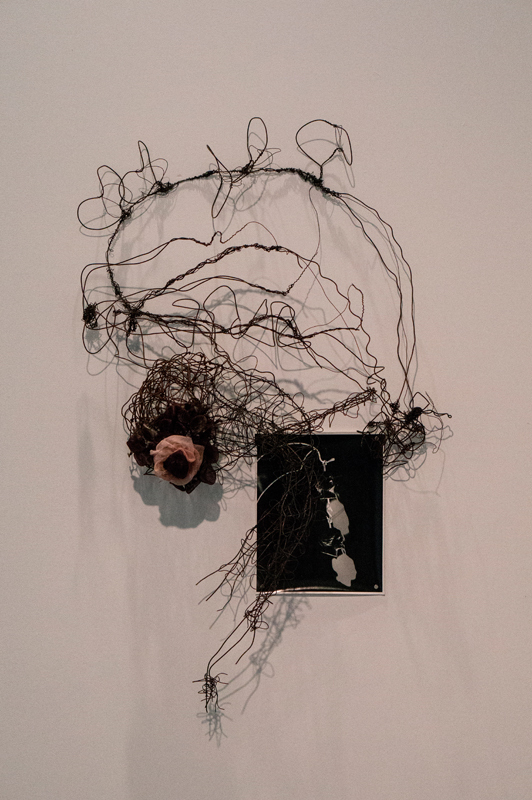 *Neurons and Other Memories* examines the interactions between art and science, with emphasis on history. (credit: Kevin Zheng/)

It’s not often that art and science come together, but when they do, the result can be beautiful.

The creative fusion of art, science, and even history is the concept behind the Miller Gallery’s latest exhibit, Neurons and Other Memories, which opened on Friday. The exhibit is small and understated, taking up only the ground floor of the Miller Gallery’s already modest gallery space. The majority of the works line the walls of a small rectangular room tucked behind the gallery’s entrance.

Within that space, though, is a surprising diversity of works. Most pieces are from the 21st century, but other selections are centuries old, demonstrating humanity’s recent history — since the Scientific Revolution, it seems — of depicting science in visual formats. One such selection is an extraction from Diderot’s Encyclopédie: an almost fantastical illustration of a tree-man, branches and roots outlining the shape of the man like veins and arteries, demonstrating the neural connections that bind the body.

The aesthetic highlight of the exhibit is Greg Dunn’s series of four beautiful, shimmering works: “Purkinje Neurons,” “Synaptogenesis,” “Glomerulus,” and “Retina I” are enamel depictions of neural connections on leaves of gold, copper, and aluminum.

After Dunn completed his Ph.D. in neuroscience at the University of Pennsylvania, “I devoted my career to exploring the intersections between art and science,” says the piece description. It seems impossible that Dunn does not mention any artistic background, though, judging by his ability to wring movement, life, and color out of his subjects.

“Purkinje Neurons” illustrates two clusters of neurons at opposite ends of the canvas, connected by fragile-looking axons (the spindly tree branch-like arms that stretch from the nucleus). Incredibly, the neurons appear to be pulling away from each other, their tendrils grasping at each other. Their struggle is splayed against a backdrop of shimmering, textured copper and gold, flecked with gentle splashes of orange and red.

In “Synaptogenesis,” tangles of a strange, stringy blue foliage rest atop unsteady white trunks, which are jagged like lightning. In “Glomerulus,” nuclei surge across the canvas, axons trailing behind, chased by a wave of opaque color splashed onto a gold leaf surface. And in “Retina I,” odd rectangular balloons float to the top of the canvas, axons hanging and splitting like tree roots.

Dunn’s series is one of the selections that stands on its own as notable work, without needing a description to justify it. Other works take on an amplified meaning when considered in conjunction with their descriptions. Erin Crowder’s “Prosopagnosia” seems abstract and obscure at a surface glance: three slides of a man’s black-and-white photographed face, the features distorted and blurred. Reading the description, however, viewers discover that the subject is renowned artist Chuck Close, who suffered from prosopagnosia — face blindness — and compensated by carefully segmenting the human face. The distorting effect of the piece is meant to mimic the experience of prosopagnosia using an algorithm of the artist’s creation.

In other works, however, the descriptions try to infuse the pieces with a conceptual meaning or complexity that doesn’t seem present in the stand-alone work. Qiong Zhang and Nicolas Kim’s untitled work, for example, is a simple black-and-white snapshot through a tangle of tree branches against a whitewash sky. The piece is accompanied by a description carrying a lofty, ethereal message about the beauty of ecosystems and neural connections — a beautiful description, to be sure, but one that seems to lie above the conceptual scope of the piece itself.

Similarly, JoAnna Commandaros’s “Synesthesia” is a tangle of wire winding into the shape of a flower, atop an eerie negative photo of what look like heads from Roman sculptures dangling like charms from a chain. The description explains the cross-sensory neurological phenomenon referenced in the title, but the only remotely synesthetic feature of the work seems to be the use of different media. The likeness of the piece to a synesthetic experience seems a stretch in this instance.

Neurons and Other Memories is a quick, pleasant stop for the curious passerby, taking half an hour at most to view in its entirety. Though forced or stretched in some works, the conceptual and visual links between art and science are beautifully evoked on more than a few canvases. In this way, it’s a perfectly appropriate exhibit for a Carnegie Mellon gallery, on a campus that promotes the intersection of disciplines and doggedly seeks links between seemingly unrelated intellectual areas.