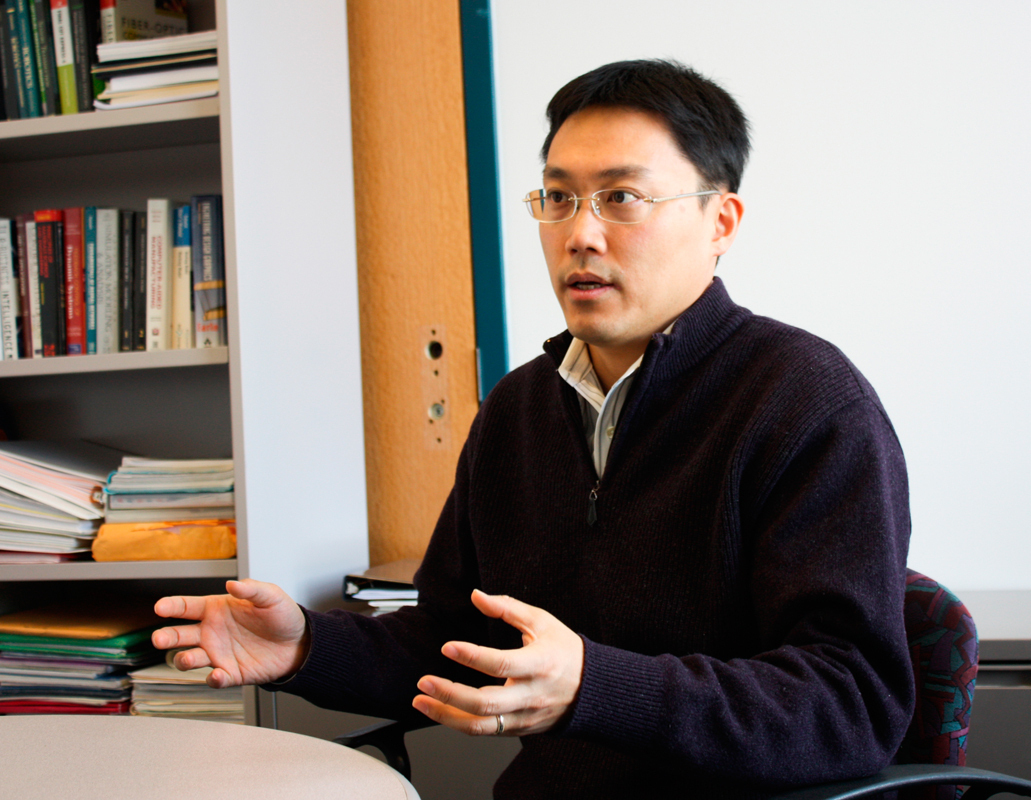 Professor Yong-Lae Park explains the benefits of soft, wearable, bio-inspired robotics, such as not being limited to one-dimentional motion. (credit: Maryyann Landlord/Comics Editor)

Medicine and medical technology have long been areas of public interest due to their clear societal benefits. Recent technological advancements have encouraged medical advancements, particularly in the fields of orthotics and prosthetics. Studies by Carnegie Mellon researcher Yong-Lae Park suggest that soft, bio-inspired orthotic devices could aid in the rehabilitation of foot and ankle disorders.

Park, currently an assistant professor in the Robotics Institute and the School of Computer Science at Carnegie Mellon, conducted the research while a postdoctoral researcher at Harvard’s Wyss Institute for Biologically Inspired Engineering with chief technology officer at BioSensics LLC, Bor-rong Chen and assistant professor at the University of Southern California Viterbi School of Engineering, Néstor O. Pérez-Arancibia. The team looked at the advantages of using a soft orthotic device based on the anatomy of the lower leg for rehabilitation of foot and ankle disorders.

Park explained that the idea for the device arose from the realization that the device needed to be different from traditional exoskeletons, which are rigid structures used for rehabilitation.

“The advantage of a traditional exoskeleton is that all the joints are really well defined and you can transmit forces more accurately,” Park said. “But the limitations are that it is bulky and it defines your motions. You cannot define your motion by yourself.”

Exoskeleton devices generally limit motion to one-dimension despite the fact that natural ankles are capable of three-dimensional motion. The soft, bio-inspired device that Park and his fellow researchers developed mimics the four main muscles in the lower leg that contribute to the movement of the ankle. By modeling the device after the anatomy of the lower leg and utilizing a soft design, the team produced a device that allows for more natural motion.

“It is impossible to copy all the muscles,” Park admitted. “As an engineer, we can simplify the identification. We can make the device compact and simple but still give active assistance.”

The development of a soft, bio-inspired orthotic has the potential to spark huge developments in the future. Park explained that while there have recently been many staggering developments in the field of prosthetics, very little has changed in the field of orthotics. Braces are generally the same and tend to keep joints in fixed angles or positions. “By doing this research, I think we can get more attention from society and more interest in this area, which will give us more leverage to support the advancement of the field,” Park said.

Park also sees this research having an influence on the integration of robotics into every day human life.

“Today we use robots to help people, but they are not really an interactive part of our world. In the future I see robots as part of our daily life,” Park said. “In that sense, soft robots will have a large impact. This technology allows us to make robots soft so they can be closer to the human body and to human life.”

Despite the promising results of the research, however, there is still a long way to go. Park explained that the soft design, as opposed to the more traditional exoskeleton design, poses some problems. For example, it is much harder to define and transmit force in the soft design because, compared to traditional braces, the device is much more dependent on the user.

Since the force must travel through the skin and muscle to reach the bone, force transmission and control are also more difficult. “This is very early staging of the prototype and design,” Park said. “The device itself cannot be practical immediately.”

An unconventional approach to orthotics, using soft robotics for rehabilitation purposes has the potential to greatly impact many fields of study. This research not only paves the way for new advances in medical treatment, but may also shed light on the steps that need to be taken in order to more effectively integrate robots into our daily lives.