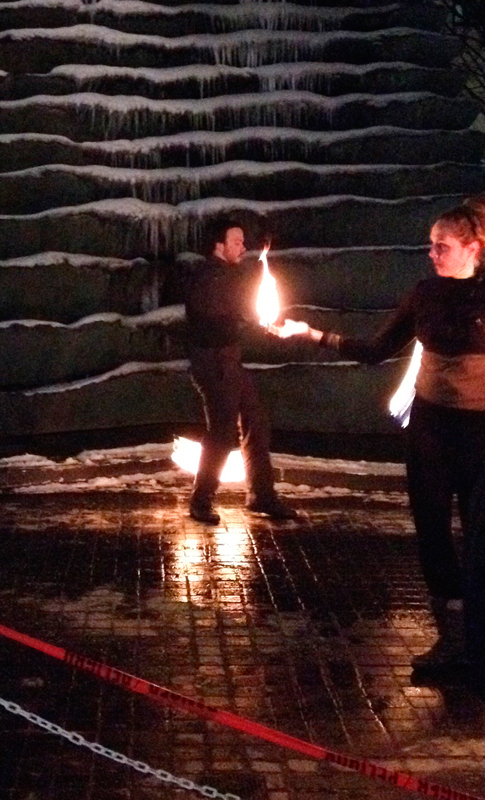 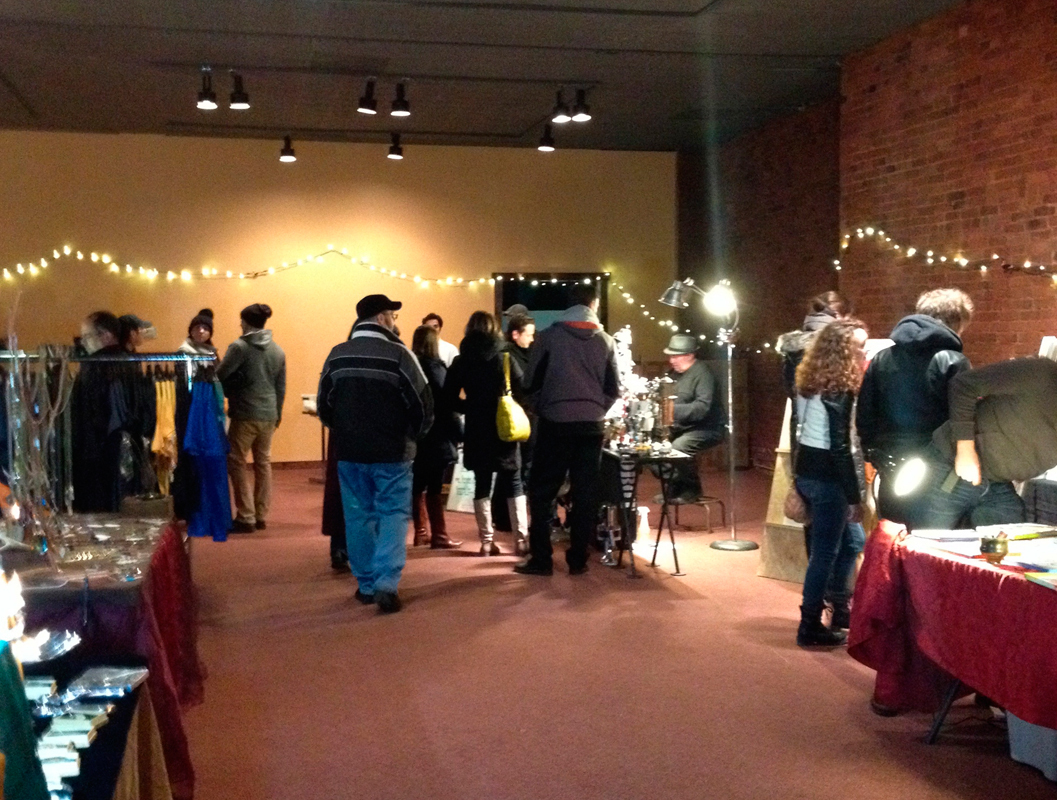 Hosted by the Pittsburgh Downtown Partnership, the Night Market offered visitors everything from Pittsburgh-centric artwork to music and conversation. (credit: Joey Peiser/Pillbox Editor) 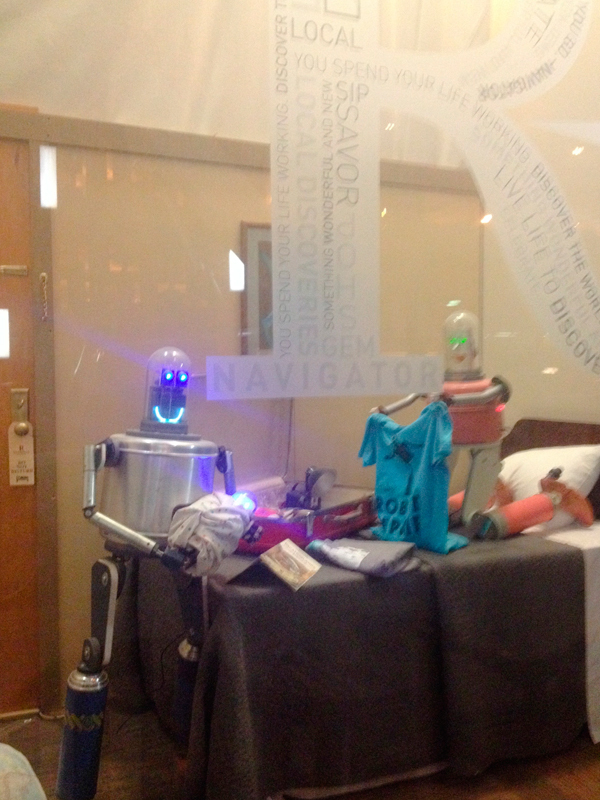 The first floor window of the Renaissance Hotel on Sixth Street is now the temporary home to the Lonely Robot, a series of public art installations by artist Toby Atticus Fraley, as he travels the country. (credit: Joey Peiser/Pillbox Editor) 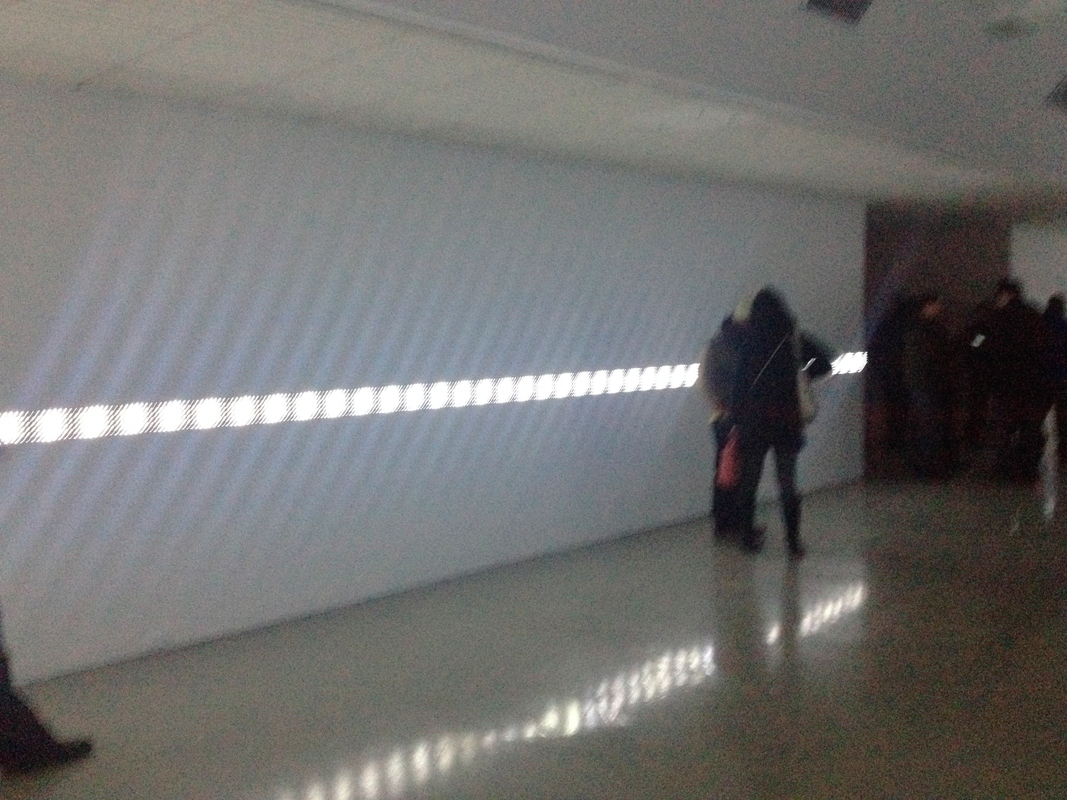 “Speed Shift”, from the Structures of Time and Space series of light instillations by artist Erwin Redl, used slowly flashing lights to create an impression of motion wrapping around the room. (credit: Joey Peiser/Pillbox Editor)

For those who fought the arctic temperatures that waved down through the streets in shivering gusts of wind to attend The Pittsburgh Cultural Trust’s first Gallery Crawl of 2014, it was definitely worth the numbed extremities. This event occurs every quarter and is a great opportunity to sample all that the Cultural District has to offer. These offerings range from premieres of new art collections and lectures to an incredibly graceful performance of fire dancing. Whether you’re looking to acquire a new piece for your collection, or just want to wander around and strike up a few words with the woman selling her artisanal teas, the Gallery Crawl truly has something for everyone.

Seeing as there are far too many events for one to realistically see everything — especially in a low of 0˚F — here are a few great excerpts from the evening.

Structures of Time and Space

Friday saw the two floors of the Wood Street Galleries premiering artist Erwin Redl’s Structures of Time and Space. The two pieces that are exhibited, “Twists and Turns” and “Speed Shift,” differ greatly in terms of aesthetics and feel.

“Twists and Turns” is installed in the darkened second floor and features red and purple lasers shot through small squares of glass hanging from the ceiling. The effect is very space-like, with the lights bouncing around the room in a kind of organized chaos. The exhibit is one that commands silence and forces all attention on taking in the space. Looking up at the ceiling feels more like staring at the night sky and seeing a million tiny galaxies whizzing by.

“Speed Shift,” on the third floor, gives off a much different feel than “Twists and Turns.” While one can hear another person’s thoughts at “Twists and Turns,” Friday saw the third floor abuzz with attendees talking and ordering drinks. The room is brightly lit and painted a jarring white. The installation is comprised of multiple rows of lights that wrap around the room and flash on and off, giving the impression of a slow movement inching its way around the perimeter. Compared to “Twists and Turns,” “Speed Shift” is much simpler and doesn’t feel as inspired as its counterpart. As a whole, the room feels as if it’s a discarded set from a 1950’s science fiction B movie.

Life and Death of the Igloo

The 707 Penn Gallery continued its previously-open exhibit, Life and Death of the Igloo by photographer David Aschkenas. The collection documents the tearing down of the old Pittsburgh Civic Arena — reverently referred to as the “Igloo” by Pittsburghers. The images, while documenting destruction, are filled with enormous heart.

The pictures clearly communicate the fact that the Civic Arena wasn’t merely a structure that was torn down, but an entire history now only alive in memory. The first picture in the collection is a crudely drawn sign on a seat near the floor of the empty arena that reads, “Thanks For The Memories.” An image of workmen folding up a banner that reads “Pittsburgh Penguins, Stanley Cup Champions 1991-92” feels like thousands of voices whispering, “I remember that.”

The gallery being as small as it is, it is also easy to hear the voices of other attendees. Walking around and gazing at the pictures of piled twisted metal that once held thousands of exhilarated fans, small tidbits of conversation can be plucked out of the air. This Friday, one man and the woman behind the bar struck up a conversation about all the concerts they’d seen at the Civic Arena back in the day, with words such as “I saw Led Zeppelin there on their first major tour.”

On the corner of 7th Street and Penn Avenue at the outdoor Agnes R. Katz Plaza, before a large fountain with rivers of still ice cascading down the sides, the Steel Town Fire performance group set down their flaming paint can to give three performances over the course of the night. Given the hazardous nature of dancing with open flame, the group performed with a kind of graceful recklessness that disregarded the frigid air and had onlookers tapping each other on the shoulder to share their astonishment.

Never stopping their fluid movement, the performers passed one continuous flame from object to object, which included swords and poi.

The performance was broken into segments marked by changing songs. The group’s soundtrack varied from chill drum and bass tracks to music that sounded incredibly raw. Some songs allowed the movements of the performers to appear as graceful as those of ballet dancers, while others forced a kind of raw energy that made one feel as if they were watching an old-world ritual. The group’s attire, which included small amounts of body jewelry and henna face tattoos, also added to the ritualistic aesthetic.

This pop-up indoor market offered a number of different things to those who walked in the door. The room felt as if it was lit by candlelight, with a single strand of white Christmas lights nailed up at haphazard intervals stretching around the room. The front of the room was set up with cafe-style tables and chairs facing a performance from a female singer
and guitarist. She played gentle renditions of covers such as Leonard Cohen’s “Hallelujah” and Bon Iver’s “Skinny Love” as well as a few well-written original songs, and perfectly embodied the kind of casual, friendly, and serene atmosphere of the Night Market.

The Night Market had a wide variety of items for sale. The first table that greeted visitors was occupied by rows and rows of glassware in vibrant colors, while the last one showcased Irish cultural items, such as pendants and wool driving caps, and was curated by the Irish Festival association. In between was everything from Pittsburgh-inspired T-shirts from the web store DeadBuryDead to boxes overflowing with shining silver jewelry and sculptures of robots made from assorted pieces of junk metal.

Visitors could easily wander around the market, examining the pottery and sharing words. In addition to the arts and craft items, vendors sold food items, such as sandwiches. Local Pittsburgh roasters Zeke’s Coffee sold cups of their exceptional coffee for $1.50. Having roamed from event to event in the cold night, it was a wonderful
experience to sit down with a cup of coffee at a table, listen to the serene sound of the live music, and simply enjoy the oasis of warmth that the Night Market offered
to the Gallery Crawl.

Even though it shot right through one’s bones, the cold of the night also brought a sense of warmth. After braving the distance from building to building, there was always a sense of welcome at every door when one could unzip their coat and take in a new experience. Seeing as the next one will be in warm weather, this quarterly event isn’t to be missed.