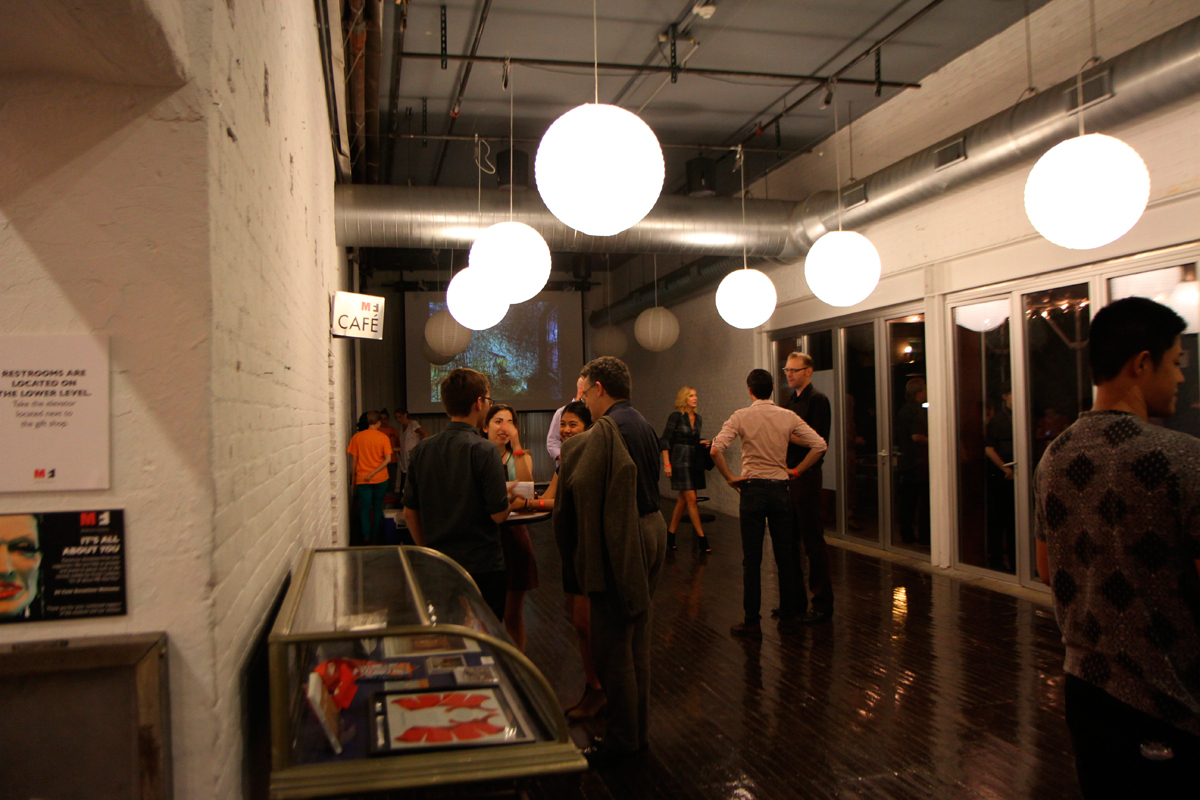 Visitors gather in the lobby of the main Sampsonia Way location of the Mattress Factory as part of the museum’s 35th-anniversary celebration, which launched two new exhibits on Thursday night. (credit: Jonathan Carreon/Contributing Editor) 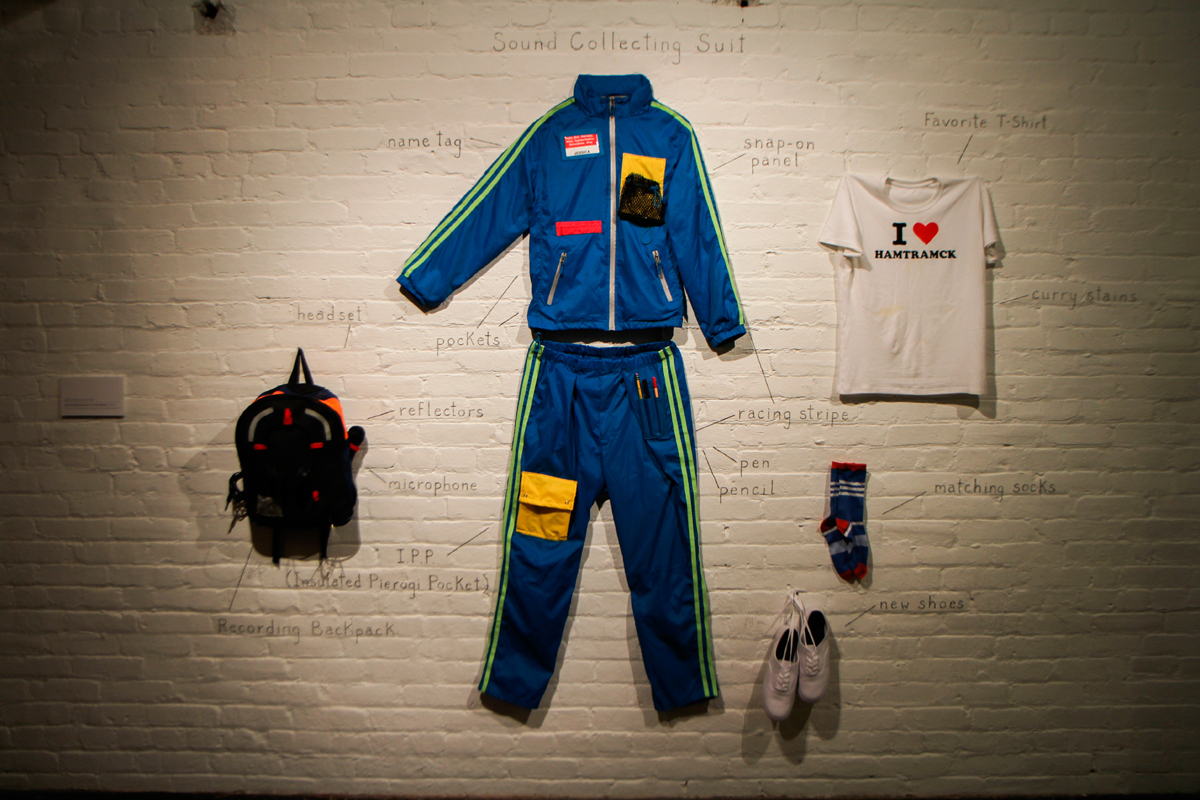 Jessica Frelinghuysen collected sounds from her Detroit-area hometown in this backpack and suit equipped with a pierogi-warming pocket. (credit: Jonathan Carreon/Contributing Editor) 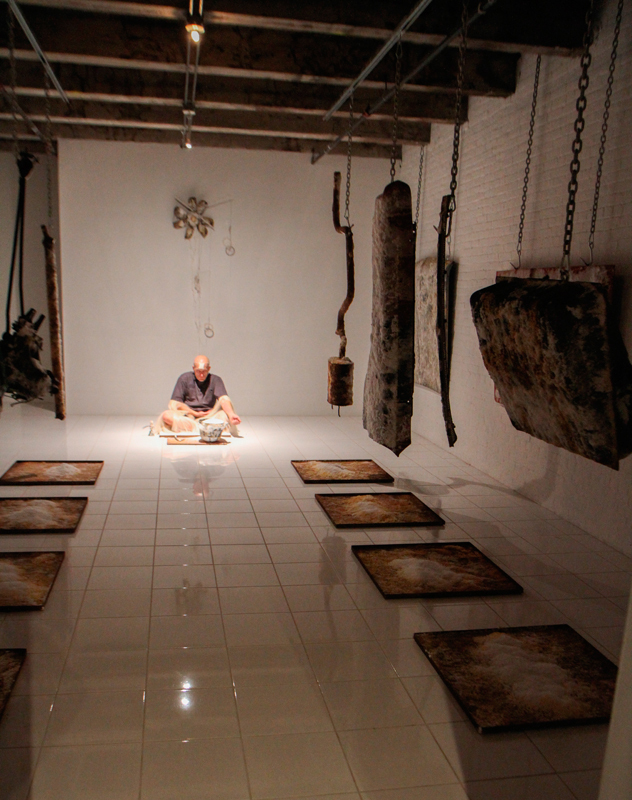 Walking around Pittsburgh’s North Side 35 years ago was a completely different experience than it is today; back then, the area was still segregated and rife with crime and drug activity.

Not so much today. Now safe and host to a diverse artistic community, the North Side has gone through significant changes in recent decades. Some of that change is thanks to the establishment and growth of the Mattress Factory, a contemporary art museum focused on site-specific installation work that dates back to 1975.

The Mattress Factory, located at 500 Sampsonia Way, began its 35th-anniversary celebration in February with a series of community parties. The festivities continue this month with the opening of two new exhibits: Detroit: Artists in Residence, and Within, an exhibit by New York City-based contemporary artist Janine Antoni.

History and Growth of the Mattress Factory

When Barbara Luderowski, a sculptor and architecture enthusiast, saw an empty mattress warehouse on Pittsburgh’s North Side in 1975, she saw the potential for a brighter future for the area. Luderowski bought the building that year for $10,000 and created a space for artists and intellectuals to live and work as a community — and thus launched the Mattress Factory.

In 1977, the organization became a nonprofit corporation, and five years later premiered its first exhibition of installation art. Since then, the museum has exhibited the work of over 600 artists from around the world and is currently home to 17 permanent installations, including creations of American light and space artist James Turrell, Japanese installation artist Yayoi Kusama, American sculptor Greer Lankton, British sculptor Bill Woodrow, and American painter William Anastasi.

The Mattress Factory has a history of embracing change and encouraging engagement with technology, museum patrons, and the surrounding community.

The museum has been an early adopter of innovative technologies. In 2009, it became the first museum in the U.S. to use QR codes to engage visitors with more information about the exhibits while reducing waste from printed materials. It also has a Facebook page and a Twitter account.

The Mattress Factory has worked hard to become a well-respected institution in the surrounding neighborhood. “Having the Mattress Factory here in a residential neighborhood has been a big catalyst for change,” said Alexis Tragos, the museum’s director of development. Since its opening, the museum has acquired and renovated two other buildings for exhibitions and others for educational spaces and artist residences, bringing jobs to the neighborhood and encouraging even more people to visit. “We are a magnet for people who are traveling from outside of Pittsburgh to come and visit,” Tragos said. “It’s a very unique attraction.”

Despite these many changes, however, the museum has sought to remain close to the history of the neighborhood. With each renovation, the museum has chosen to keep the previous building’s façade in order to blend with existing architecture. Even when artists want to change the structure of a building — Sarah Oppenheimer’s piece “610-3356” created an opening in the fourth floor of the gallery that gives visitors a direct line of sight out of a third-floor wall and into a neighboring yard — the Mattress Factory has kept at least part of the original appearance in place.

Installations of extreme proportions, such as Oppenheimer’s work, are not often encouraged by museums, but this type of experimentalism is at the core of what the Mattress Factory does. Since its establishment, the Mattress Factory has presented itself as a place where artists are encouraged to pursue ideas that may originally seem impossible. “When an artist has a big idea, we make it happen,” Tragos said.

The main museum building houses the first of the two exhibits that opened last Thursday. Detroit: Artists in Residence features recent work by four artists and two collaborations, all based in Detroit. According to a museum press release, the artists were chosen after a trip to the city that inspired museum co-directors Luderowski and Michael Olijnyk.

“The artists’ reactions to the swift socioeconomic changes in Detroit, and their making of work in an environment burgeoning with opportunity, align with the Mattress Factory’s mission of encouraging artists to experiment and take risks,” the press release said. “Such edgy creativity and entrepreneurship remind Luderowski and Olijnyk of the same spirit at play during the founding of the Mattress Factory on Pittsburgh’s North Side 35 years ago.”

One of the artists whose work is displayed here, Jessica Frelinghuysen, built her entire piece out of such external elements. In her work “My City is Your City,” Frelinghuysen examines personal and shared experiences in close communities through an audio and visual representation of her life in Hamtramck, Mich., a two-square-mile city almost entirely surrounded by the city of Detroit.

The installation is a room full of tree-like structures built from alley wood and tin cans. Hold a can up to your ear, and you hear a sound — people talking about their heritage or life story, the sound of trains going by, clips from a live music performance — that Frelinghuysen collected from the area.

Frelinghuysen’s piece also includes the uniform she wore while collecting these sounds: a backpack with her audio recording equipment and a bright blue jumpsuit complete with a pierogi-warming pocket. The piece encourages visitors to listen to these people’s voices in order to better relate to a small community and the sounds that surround them every day.

Wandering into the next room, visitors are presented with the façade of a house, complete with two doors and a few exterior lights. From behind the doors, hammers, electric saws, and even human screams can be heard. A visitor who enters through one of the doors finds themselves in the midst of Nicola Kuperus and Adam Lee Miller’s psychological game: a piece titled “Diptyching.”

The room features a full-wall projection of a video of Kuperus and Miller, which shows the artists as they build the façade, watch it fall, and then take it apart. The video was made in the museum, and the artists rebuilt the piece after the filming with the video aspect built in.

According to the press release, the installation is “intended to be a visceral, confusing, and destabilizing experience,” and it absolutely is. The video is part comedy — complete with campy splashes of obviously fake blood — and part meaningful performance, where the repetition of scenes and sounds creates a truly disorienting environment. Watching the builders experience “injuries” in the building process is funny until the incessant barrage of these images starts to hurt. With this piece, Kuperus and Miller create a surreal world that is both comedic and grotesque, as funny as it is painful.

This unsettling, fun-house feeling continues throughout the exhibit. Another room features “1913 Revisited in Three Parts,” a piece by Frank Pahl that takes the visitor back in time to a world of mechanical devices and complex instruments. The installation is peaceful and nostalgic, but can feel very surreal. Changing lights cast odd shadows across the machines, and the room’s soundtrack distorts the visitor’s sense of time. Without being overly stylized, the piece — through both its title and actual construction — creates an environment for the viewer to meditate on the passing of time.

In the museum’s basement is one of the most surprising and confusing pieces of the Detroit exhibit: Scott Hocking’s “Coronal Mass Ejection.” This piece features a replica of a rusted 35-foot-long hot metal train car (called a torpedo or submarine car) surrounded by sculptures in various stages of worship, some human and some featuring dinosaur-like add-ons to their heads.

The piece is partially “about worshipping things beyond our understanding,” Hocking said. The mysteriousness of the industrial artifact combined with the religious aspect of its worshippers leads to questions about various mythologies and creation amd destruction myths. “This came from me thinking about how our artifacts will be interpreted in the future when they’re found by others,” Hocking said. “There’s mystery involved in religion, in archeology, and in science.”

The exhibit also features pieces by Russ Orlando, as well as a collaboration between Gina Reichert and Mitch Cope. “Cured,” Orlando’s piece, “explores the notion of healing a city, preserving what has defined it, slowing down time, making things last,” according to the gallery guide. It explores a butcher’s practice of curing, but instead of meats, metal car parts hang from chains and meat hooks suspended from the ceiling. The metals are covered in salt and are displayed in various stages of preservation and deconstruction.

Reichert and Cope’s piece, titled “Following The Sun 2,” is an installation encouraging research and reflection on environmental influences. Visitors can directly observe real-time wind and solar activity through carefully placed warming rocks, video screens, and other natural elements, with a focus on the use of direct current electricity.

Detroit is well suited for the 35th anniversary of the museum, as its displays encourage a high level of visitor participation and artistic creativity. These six pieces explore six completely different settings and ideas, but the underlying themes of the city itself have informed each work and thereby allow for a unified exhibit.