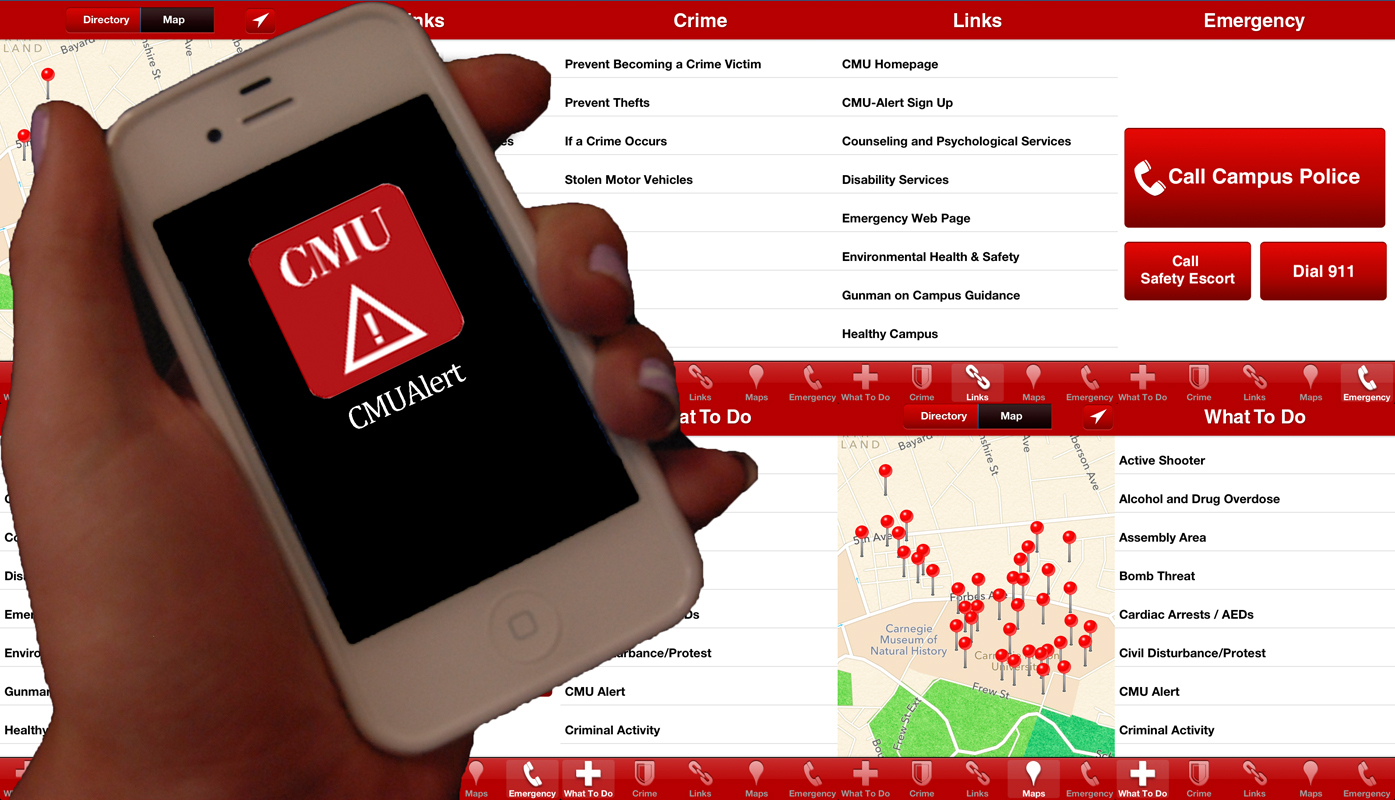 Carnegie Mellon’s division of Environmental Health and Safety released a CMU Alert iPhone application last Tuesday in order to provide students with accessible information and resources during emergency situations. CMU Alert is available through the iTunes store and can be found, with descriptions of its features, at cmu.edu/alert.

Separate from the existing CMU Alert system that operates by email and phone, the app provides immediate “information on what to do in various emergency situations and how to prevent crimes, [as well as] interactive maps with information on Automatic External Defibrillators (AED) locations and campus bus routes,” according to the app’s description on iTunes.

Carnegie Mellon University Police Lieutenant Gary Scheimer said that the application was the brainchild of Madelyn Miller, the director of Environmental Health and Safety.

“[Miller] came to us with the topics relevant to CMU police and we contributed [to the project],” Scheimer said. “It wasn’t an easy task to bring this about.”

“We’ve been working on the app for over a year, and we’re thrilled to have it out,” Miller said.

Miller emphasized that CMU Alert is completely separate from the existing CMU Alert network. “This app is for what to do in the first 10 minutes of an emergency,” she said.

“The issues we focused on were scenarios with required immediate action, such as an active shooter or chemical hazard,” Scheimer said.

Miller added that Environmental Health and Safety is waiting to hear student feedback on the application, and the division is currently developing a version for Android phones. The iPhone version was created by the mobile application developer DoodleBlue, which released a statement about CMU Alert that said, “Student safety is the top most important priority of schools and colleges. It’s important for students to be alarmed and be informed, especially in times like these when crime rates have shot up like nothing seen before.”

“I think the name of the app may be misleading,” said junior business major Grace Pan. “While this is all information that can be found on CMU websites, it is helpful that it is in a centralized location and it is more accessible.”

Further student reaction to the development of the new application is mixed but hopeful.

Sophomore economics and math double major Ben Zhang likes the idea of the safety application, but said he could envision future problems with it. “I just see two main issues with it: getting people to install the app and getting people to not delete the app,” he said.

“I feel like it would be useful, but I’m kind of the person that says, ‘Well, I won’t using it frequently, and I’m going to assume the advice they give is pretty much common sense’ ” Zhang added.

Junior computer science major Mindy Pile said, “It sounds like a pretty great idea, especially since most people don’t know how to handle certain natural disasters or deal with in an emergency medical situation.”

Pile did mention some possible improvements. “How useful it is also depends on how easy it is to navigate. Having the emergency numbers and CMU police numbers listed front and center would be a good thing.”

Environmental Health and Safety personnel are asking students to continue providing feedback on the application and its features.