Learn where to find your caffeine fix before it's too late 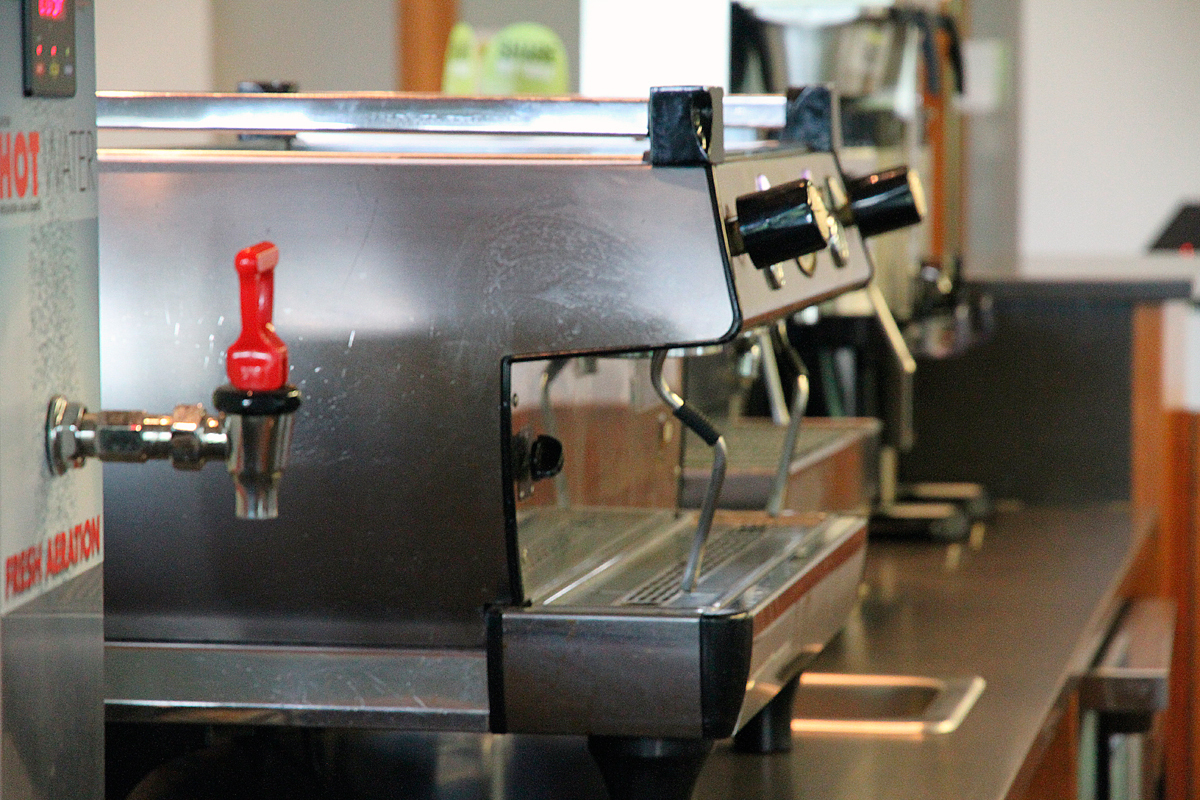 Tazza D'Oro is a student favorite. Located on the third floor of the Gates Center, it offers great coffee and food, and is extremely crowded during lunch hours. Be sure to get there early if you want a table. (credit: Jonathan Carreon/Contributing Editor)

Carnegie Mellon is infamous for late nights, early mornings, and insufficient amounts of sleep, all starting during the week of Orientation. So what’s a Carnegie Mellon student to do in order to stay awake and not miss any of the fun? Everyone’s favorite mild liquid stimulant — coffee — can be found all over campus and in the neighborhoods nearby. So whether it’s 4 a.m. on a Sunday and you’re finishing a few lines of code, or you just need a quick pick-me-up before a nighttime recitation, Carnegie Mellon can offer an abundance of choices to satisfy that caffeine craving.

Since coffee isn’t listed on the main Skibo menu, there are fewer coffee orders to fill. The fewer the orders, the more likely you’ll end up with a half-decent cup of coffee that isn’t totally burned. They’ve got your standard lattes, cappuccinos, and some nice flavor shots like vanilla and hazelnut. The beans are ground after you order, so the coffee typically tastes pretty good. If it’s really busy, the person making your coffee might be in too much of a rush to properly warm up your milk. Just ask; the staff will rectify the situation, and Skibo has some of the nicest staff of all the campus dining locations. Just don’t show up on a Friday or Saturday night.

Another eatery that tends to run out of coffee at key times during the day — breakfast, lunch, and dinner, for example — the Café serves black Starbucks coffee in three different sizes. If you happen to catch a fresh pot, it’s a great option for a quick cup of coffee before running to class. Be warned, though: Since the Café is predominately a place for food, the line can get extremely long during meal times. On the plus side, however, you can get your cup of coffee on a block: The Café is one of the only dining locations that allows you to get a decent cup of coffee with your meal without an extra charge.

Coffee here comes straight out of a silver contraption with a nozzle. The coffee sits in there until it’s empty and the staff decides to make a new pot. Think diner coffee, except you get to serve yourself, and sometimes there just isn’t any coffee left. Also available is some sort of sugar syrup that is called coffee, but no one is really sure whether you get the jitters from the supposed caffeine or the amount of pure sugar coursing through your veins after one cup of the stuff. Either way, the coffee will leave you a bit disappointed and wishing you’d walked just a little further to get a drink.

Unless desperation strikes, avoid both outlets of Ginger’s Express if you can. The location in the basement of Baker Hall is fine if you’re really in a hurry, since there usually isn’t much of a wait except in the early morning. The coffee is Starbucks black. It’s usually lukewarm unless you’re there right after it’s made. The muffins and other snack offerings are somehow so greasy they could stain a shirt, and so dry you might choke if you swallow too quickly. It’s definitely not a “don’t-miss” stop for a cup of coffee — or anything.

La Prima is arguably one of the busiest places to grab a cup of coffee any time people aren’t sitting in class (during breakfast, lunch, and breaks between classes). But it’s definitely worth it. The employees are friendly and funny, the coffee options are vast, and it’s worth it to pick up a croissant, biscotti, or another treat if you’d like something yummy to accompany your coffee. Although it’s not viable as a place to stop in a hurry, and it isn’t open after classes finish for the day, the line past the bank of elevators will tell you that your fellow students think the wait is worthwhile.

Although the coffee is nothing special, you’d be hard-pressed to find a Carnegie Mellon student who hasn’t thanked the powers above for the existence of the Maggie Murph Café at least once. Open 24 hours a day, five days a week, the Maggie Murph Café has the most robust menu options of on-campus Starbucks coffee locations. The variety of syrups, specialty coffees, and made-to-order drinks means that the line is long during peak times like breaks between classes, but you’ll be able to get what you want. It’s also the best location to bond with other sleep-deprived students and café employees any weeknight after 3 a.m.

Arguably the best stop on campus for an iced or hot beverage, an ever-changing and amusing playlist, and totally hipster baristas, Tazza D’Oro is certainly not to be missed for anyone seeking a made-just-for-you cup of the good stuff. It’s one of the few spots on campus that isn’t run by CulinArt and doesn’t serve Starbucks coffee, and there are plenty of cool — albeit bizarre — brightly colored seating options even after the café is no longer open. Maybe someday our beloved Tazza will stay open to serve the late-night coders all over Gates every night of the week.

A stop at the Zebra Lounge, which offers your typical Starbucks hot coffee options, is worth it for the ambiance and décor. True to its name, the Zebra Lounge has plenty of zebra-patterned seats, tables, and other accents, and boasts a decent range of coffee accompaniments like donuts and sweet breads. If you grab a cup of coffee during an off-peak time, like the mid-morning lull between the breakfast and lunch rushes, it’s a nice place to enjoy a leisurely cup of coffee in peace. With no windows except high overhead, the location is a nice escape from campus if that’s what you need.

Just a few blocks down the road from campus, the Bagel Factory is a favorite eatery of Carnegie Mellon students, University of Pittsburgh students, and Oakland residents alike for its yummy variety of breakfast and lunch fare, full range of coffee options, and abundance of other fresh treats. Although frequently busy — sometimes packed from wall to wall — the Bagel Factory has some of the best off-campus coffee that’s still within walking distance from most dorms on campus.

Although Carnegie Mellon offers Starbucks coffee, the actual Starbucks outlet on Craig Street typically has better and fresher-tasting coffee than its on-campus counterpart. Also a very busy spot for local college students, Pittsburgh residents, and people visiting the museums or colleges nearby, if you’re craving a cup of coffee that tastes the same no matter where you go, Starbucks is a safe choice. But unless you get lucky or arrive at some off-peak time of day (which is extremely unlikely), it’s nearly impossible to find a seat in the too-small indoor seating area, and there’s no outdoor seating. Head across the street and sit outside the Carnegie Museum of Art if it’s a sunny day and you’d like to enjoy the fresh air away from campus for a little while, or get your coffee to go.