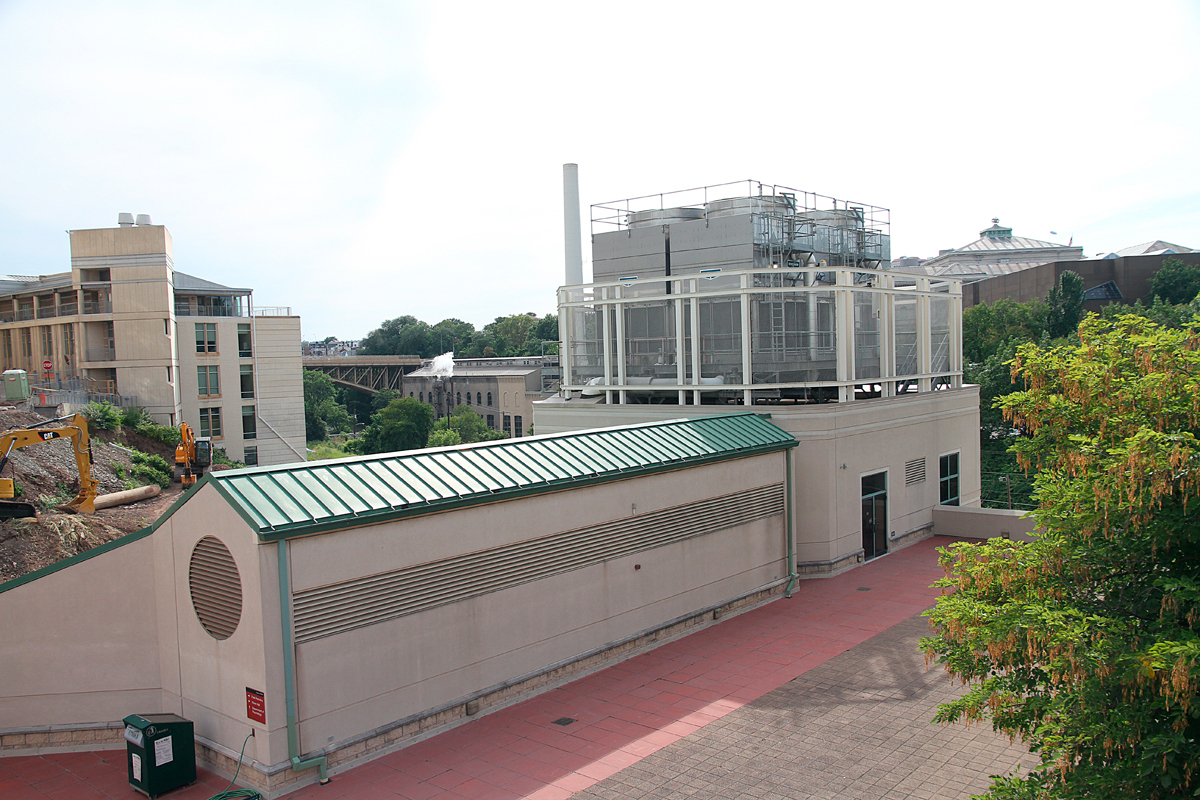 The Carnegie Mellon University community was notified, via a Health and Safety Alert, of the presence of Legionella bacteria in a cooling tower on campus. Following the alert, sent out on July 23, the tower has been cleaned and inspected.

The alert reported that the bacteria was identified by a “periodic testing program for Legionella [that] revealed high levels in a single cooling tower on campus,” according to an email from director of Environmental Health and Safety Madelyn Miller.

The tower, which was marked with yellow caution tape, is located near the Collaborative Innovation Center (CIC) and the Facilities Management Services (FMS) buildings.

The bacteria has not spread into the surrounding air or water. Miller’s email stated that “because the water in the cooling tower is not recirculated into the building’s air or water supply, indoor air quality and drinking water on campus are not affected,” and that the tower was being treated to kill the bacteria.

“We dosed the towers heavily with chlorine and will take down the yellow tape,” Miller said.

Following the treatment, the tower was tested again for presence of the bacteria. Miller stated that the results revealed that Legionella was no longer present.

“We were very confident that our treatment protocol would be effective,” said Don Coffelt, director of FMS.
Before this incident, the university tested for Legionella twice per year. “One of the outcomes of this event is that we’re increasing our testing to monthly,” Coffelt said.

“I don't know if I've ever been to the building and it's definitely not in a high-traffic area,” senior international relations and politics major Corinne Rockoff said, “so I can't imagine it ever being a danger to too many students. I hope it's not a problem for any of the FMS employees.”

The Centers for Disease Control’s (CDC) website states that Legionella is often found in areas of warm water such as hot tubs, cooling towers, plumbing systems, and fountains. Breathing in water droplets containing the bacteria can lead to Legionnaires’ disease. As the CDC describes, “One example might be from breathing in droplets sprayed from a hot tub that has not been properly cleaned and disinfected. The bacteria are not spread from one person to another person.”

Common symptoms of Legionnaires’ disease are coughing, shortness of breath, high fever, muscle aches, and headaches; these begin two to 14 days after being exposed to the Legionella bacteria, according to the CDC website.

The Health and Safety Alert urged members of the campus community to contact University Health Services if they developed “a cough, high fever, and other flu-like symptoms,” and had been near the water tower between the CIC and FMS buildings.

Miller explained that the only people who have come down with Legionella are immunocompromised — people with AIDS, liver transplants, and similar conditions that significantly lower one's white blood cell count.

“I think people should know that Legionella is ubiquitous in the environment,” Miller said. “It comes up in water-borne aerosols.” Miller said that it is common to find legionella in shower heads or the mist used to clean lettuce at grocery stores.

Junior economics major Radowan Khan said, “The email gave me the impression that the university is taking its precautions seriously. It sounds like people are doing their jobs and I'm not at all concerned.”

Coffelt emphasized that the Legionella was “isolated from water in the building,” and compared the cooling system to a radiator for a car. Fluid from the radiator does not enter the engine — it is used instead to regulate temperature.

“Because the population is so dense on a university campus, we try to keep our levels down to a hospital’s level,” Miller said.